Today (midnight, to be precise) is the 50th anniversary of the enforcement of the Marine Broadcasting (Offences) Act which effectively outlawed the operation of pirate radio stations broadcasting to the UK from offshore ships or disused sea forts.

The National Archives holds some fascinating files concerning pirate radio, about which, more later. To begin with, I’ll set out the historical context.

Following the breakthrough of The Beatles in 1963 there was an explosion of new groups and singers – a British beat boom, with the emergence of the Rolling Stones, the Who, the Kinks, the Animals, Dusty Springfield and many more exciting new groups and artistes.

By 1964 transistor radios were becoming popular, particularly with teenagers: for the first time, radio had become portable (previously ‘the wireless’ was a bulky set containing electrically heated valves). So there was an increasing demand for pop music on the radio. But BBC Radio did not cater for this. The ‘Light Programme’ delivered a mix of entertainment, including comedy shows, but the pop content was limited. There were also restrictions (‘needle time’) on the amount of recorded music that could be transmitted on the BBC.

There was a gap in the market; it was filled by pirate radio stations. 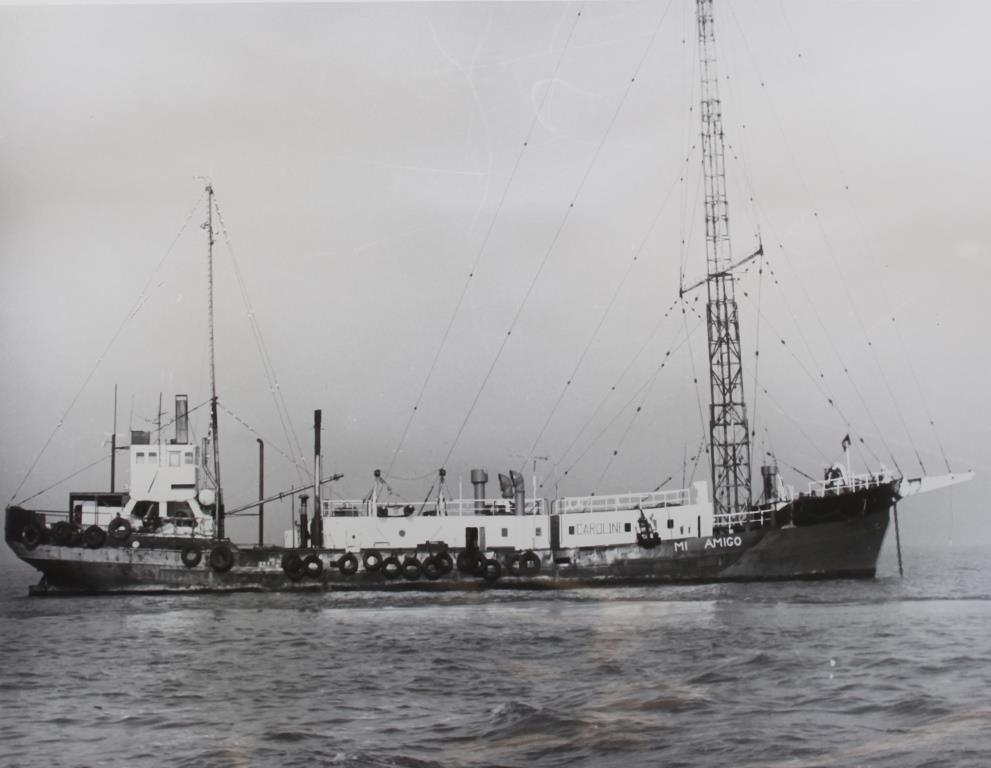 The first pirate radio station was Radio Caroline, founded by Irish entrepreneur Ronan O’Rahilly. It began broadcasting from a ship off Essex in March 1964. Over time several more offshore radio stations were established, including Radio London and Swinging Radio England. They broadcast from just outside English territorial waters.

The style of presentation on these channels was influenced by commercial broadcaster Radio Luxembourg and American radio stations. The DJs had a casual and spontaneous style (which contrasted with the formality of BBC presenters) and played the pop hits of the day. As the format developed, they increasingly used lively and exciting jingles, which were often created in the US. Several famous DJs, including Tony Blackburn and Johnnie Walker, began their careers on Pirate stations. There was a sense of romance about being out at sea, being frowned upon by the authorities, and broadcasting music to the people. These ‘pop buccaneers’ attracted hordes of fans.

For the first time ever in the UK, pop music could be heard all day on the radio and the stations became very popular indeed. A Social Survey (Gallup) poll showed that over 6 and a quarter million adults out of a possible total of 19 million adults in the reception area had listened to Radio Caroline in the first three weeks of broadcasting in 1964. 1

The UK Government expressed concerns about Pirate Radio at an early stage, and made it clear they wanted to prohibit them. Tony Benn, Postmaster General (1964-66) and Minister of Technology (1966-70), pressed the issue several times in the House of Commons. 2 In a written answer given in the House of Commons on 4 February 1965 he stated:

Benn claimed that the wavelengths used by the pirates could potentially block emergency transmissions by ships at sea, and he cited evidence for this in the Commons on 22 March 1965:

‘the interruption of any of the authorised channels of communication between ships and the shore constitutes a danger to shipping. This was illustrated by the incident on 23rd February last, when a lightship was prevented for about 30 minutes from passing an urgent report to the shore because both of the frequencies available were blocked, one of them by a pirate broadcasting station.’ 4

In my research I have yet to find a detailed set of arguments countering the government’s claims that pirate radio stations were blocking emergency transmissions. From the perspective of the pirates, the government’s fears were exaggerated. In his autobiography Johnnie Walker dismissed their claims as ‘government spin’.

Another criticism which Benn frequently advocated was that none of the stations were paying royalties in respect of copyright:

‘They are also stealing copyrights of all records they broadcast and stealing the work of those who have made the records and the legitimate business claims of those who manufacture them.’ 5

However, Johnnie Walker claims that ‘the pirate radio stations had always offered to pay royalties but the record companies refused because they didn’t officially recognise our existence’. 6

Despite opposition to pirate radio from the International Federation of the  Phonographic Industry, advance copies of new discs kept finding their way to the stations, thanks to record promoters, and record sales must surely have been boosted by all the airplay.

The shooting of Reg Calvert, the owner of a fort-based pirate radio station (Radio City) in June 1966 brought bad publicity for the pirates and accelerated the government’s decision to take action to outlaw the offshore radio stations. The Marine Etc., Broadcasting (Offences) Bill was introduced into the House of Commons on 27 July 1966 and duly enacted.

The Act would come into effect at midnight on 14 August 1967 – it would now be ‘an offence for any British subject to broadcast, work for or advertise on, promote or assist any vessel, aircraft or structure that was involved in broadcasting to the British Isles from outside territorial waters’. 7

I have recently started research for a talk about Radio Caroline and the battle of the airwaves (part of an event at The National Archives called Pirates, Pop and Protest, on Saturday 7 October).

I’m still discovering material but I’ve already found some gems. The documents are fascinating because they show how closely the GPO (General Post Office) was monitoring Pirate Radio stations before and after the Marine Broadcasting (Offences) Act came into force. The monitoring was carried out mainly by a network of Post Office Radio Stations (I have found one example of a Post Office technical officer listening in on a receiver at a home address). The reports produced by GPO officials are very detailed; there is, for example, a list of advertisements broadcast on Radio Caroline with the dates and exact times of transmission.

I am particularly fascinated by the transcripts of recordings of broadcasts by Radio Caroline, made as the deadline of midnight on 14 August approached, and the spirited messages of defiance from the DJs, such as this transcript from 29 July 1967, which I assume are the words of Johnnie Walker. The DJ gets his dates muddled (‘August the 16th’ should have read the ’15th’) but his pledge to carry on broadcasting past the legal deadline is clear:

‘at Midnight we hope to have a very special message for you, and the first record we shall play, at one minute past midnight on August the 16th, Wednesday morning, will be that record by the Beatles’ 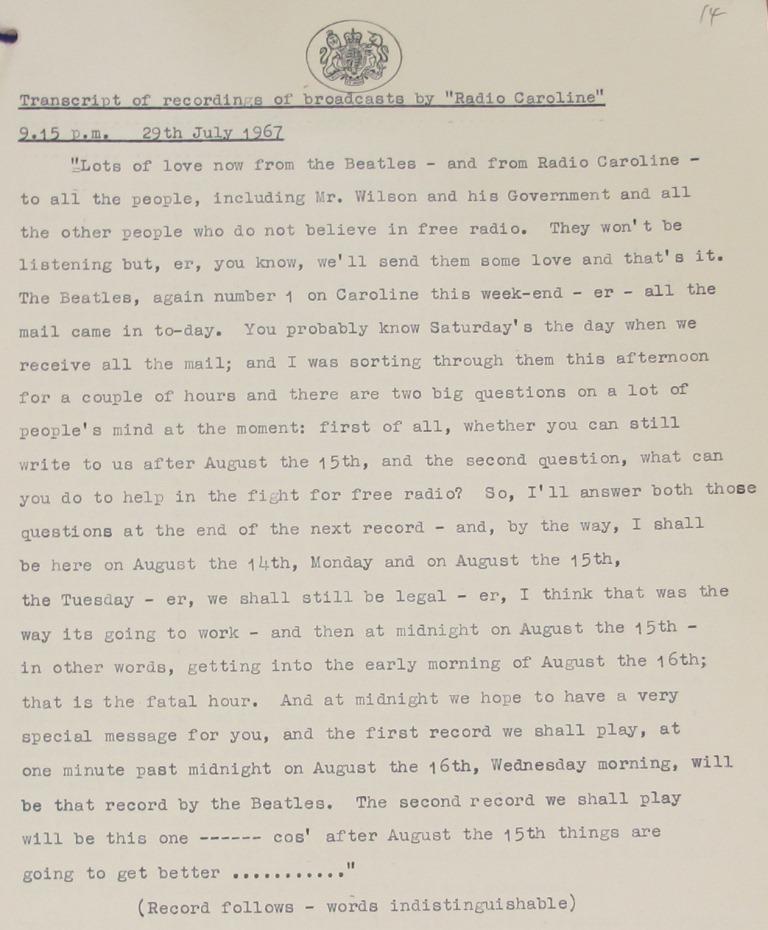 One by one the pirate radio stations closed down, apart from Radio Caroline (which had two operations: North – MV Caroline, off the Isle of Man – and South – MV Mi Amigo, off the Essex coast). Johnnie Walker describes continuing to broadcast past the midnight deadline on Radio Caroline (South) with his fellow DJ Robbie Dale on the night of August 14/15th. At midnight he played the classic protest song ‘We shall overcome’; after giving an assurance that Caroline intended to stay on air, he did indeed play ‘All you need is love’ by The Beatles. Walker writes:

‘Someone in the studio  produced a bottle of champagne, the cork was popped and we all drank a toast to the future of Caroline, and then we sang along to The Beatles. I was on a complete high’. 8

Radio Caroline North and South continued broadcasting programmes to Britain and the continent until 3 March 1968, when the ships were silenced due to financial problems. They were towed to Amsterdam and impounded. Radio Caroline was revived, though it had ups and downs; it still continues on the internet and digital radio but that, as they say, is another story.

The BBC responded to the popularity of pirate radio by restructuring its radio services, establishing Radio 1, Radio 2, Radio 3 and Radio 4 on 30 September 1967, with Radio 1 as the pop music service. Several pirate radio DJs joined it. The heyday of pirate radio may have been brief, but it had a lasting impact on radio broadcasting.