Arts and Crafts at the Archives 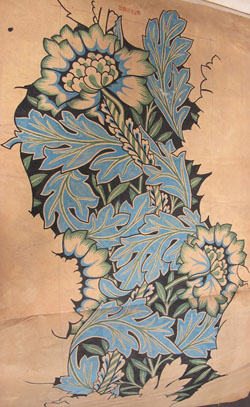 The Arts and Crafts design style remains popular over 150 years after its beginnings in the work of William Morris and his circle. The William Morris Gallery in Walthamstow reopened in 2012 to enthusiastic reviews 1, arts and crafts designs fetch high prices at auctions, and events like the current Arts and Crafts exhibition at the department store Liberty remain popular.

The development of the movement can be traced through records held at The National Archives. We hold records of designs registered for copyright with the Board of Trade and successor departments between 1839 and 1991, including samples and original designs by Morris & Co, as well as many registrations of designs by Liberty. Records from 1842 to 1883 are in BT 43 (representations – drawings, paintings, photographs or samples of the design) and BT 44 (registers). These series have been catalogued by item, and are searchable online by registered design number, proprietor, date, address and (sometimes) description of object. See our online guide for more information about registered designs.

Although nowadays we associate William Morris with the Arts and Crafts movement, this term was not actually coined until the 1880s, when the Guild of Handicrafts was formed. However, Morris and his followers had a huge influence on the development of the movement, helping to promote the idea that the design of furniture and other items for the home had as much right to be considered ‘artistic’ as the ‘fine arts’, such as sculpture and painting. Morris associated good design with moral values, and believed in the intrinsic value of hand craftsmanship, the value of art for everyone, and the democratisation of work. The National Archives holds many Morris & Co samples and some original designs, including ‘Anemone’, shown here. 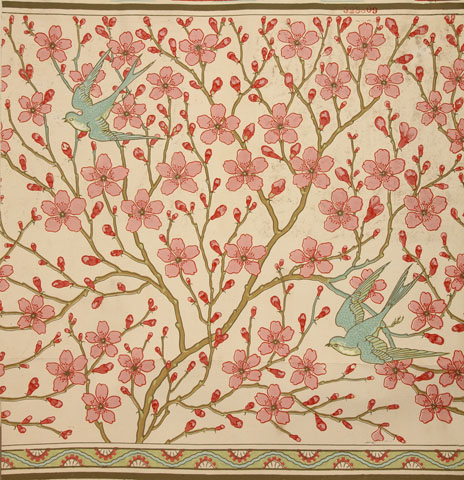 The Arts and Crafts movement was an approach to manufacture as well as style. Members of the movement turned away from huge factories and set up small workshops which concentrated on developing the practical skills of the workers rather than on cheap, large-scale manufacturing. Morris was president of the Arts and Crafts Exhibition Society from 1893 to 1896, the year of his death. Another founder member, and the first president of the Society, was Walter Crane, well-known as a book illustrator as well as being a designer of ceramics, metalwork and wallpapers. We hold a number of samples of Crane’s wallpaper designs at The National Archives, including ‘Almond Blossom and Swallow’, intended as a frieze, which was exhibited at the International Exhibition, Paris, in 1878, where it was awarded a gold medal. The wallpapers were registered by Jeffrey & Co, which often produced designs by well-known designers and were therefore keen to copyright the work. 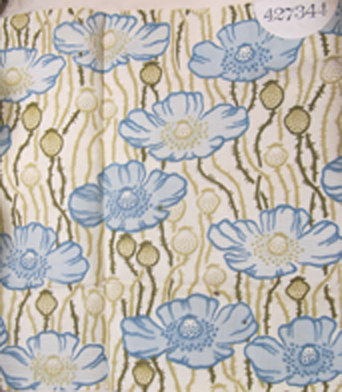 The store Liberty was founded in 1875 by Arthur Lasenby Liberty (1843-1917), and by the late 1880s was hugely fashionable and a focal point for the sale of ‘artistic’ furniture, textiles and other items for the home. Liberty also registered work they had bought from well-known designers, which were made to be sold exclusively in their shops. 2

As well as textiles, such as ‘Poppyland’, shown here, there are a number of registrations of Liberty’s ‘Tudric’ range of pewter and ‘Cymric’ silver items. The Cymric spoon shown here was designed by Archibald Knox, possibly to celebrate the coronation of Edward VII – an example is on display at the British Museum. The unassuming looking ‘Thebes’ stool became something of a design classic, and was a big success for Liberty – an example is on display at the V&A. 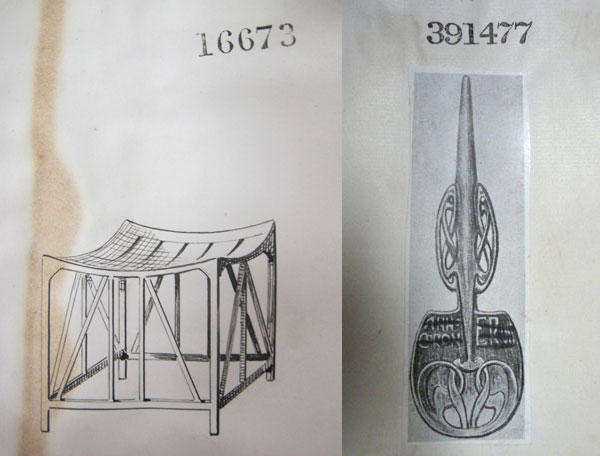 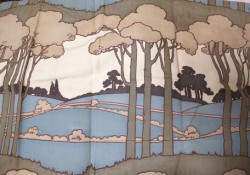 This fabric was registered by Turnbull & Stockdale in 1904. The designer Lewis F Day was their artistic director and provided many of his own designs. He helped make the company a leading textile manufacturer, and it became a contract printer for Liberty and other major outlets. 3