Art in the Archives

Following the success of our ‘Behind the Scenes’ repository tours we are currently running tours based on specific themes: this month’s was ‘Art in the Archives’. Here are some of the original documents we selected to show to the tour group…

The INF 3 series consists of original artworks produced for the Ministry of Information for publicity and propaganda during the Second World War. There are over 1800 original artworks in the series, which vary greatly in size and media. 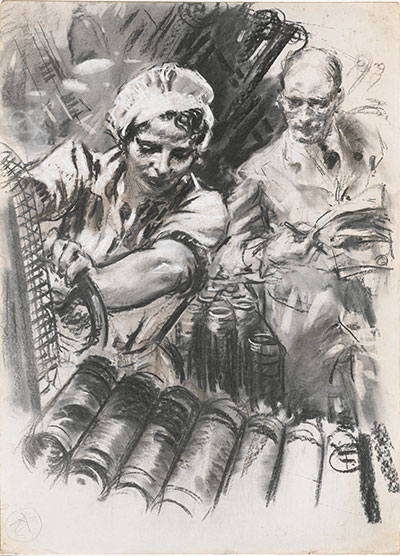 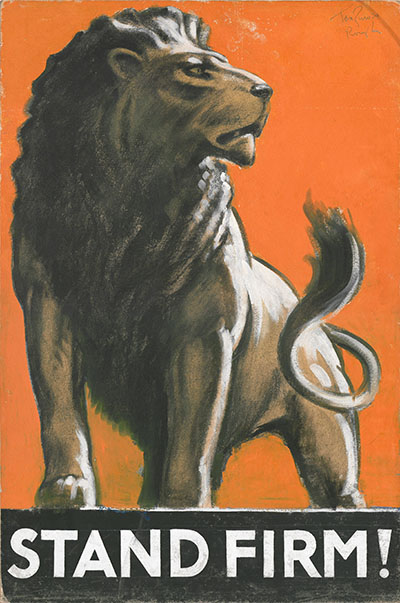 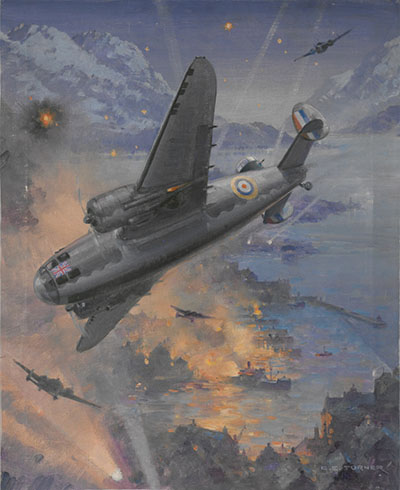 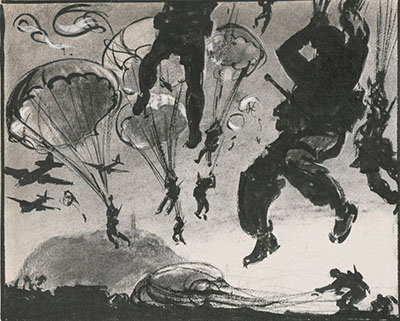 The works were intended for use in all sorts of wartime campaigns including recruitment drives, encouraging food production and saving of useful materials, health and safety matters and discouraging careless talk.

The better-known of these works encouraged the public with well known phrases such as ‘Dig for Victory’, ‘Make Do and Mend’ and the now ubiquitous ‘Keep Calm and Carry On’.

Who took the Duke?

In the summer of 1961 the British government, keen to prevent the sale of Francisco Goya’s ‘The Duke of Wellington’ to an American collector, launched a campaign to raise the £140,000 they needed to purchase the painting for the nation. The appeal was successful, and the painting was exhibited in the National Gallery to much fanfare. 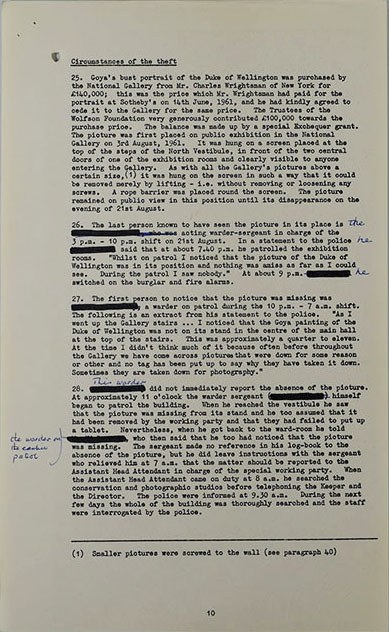 Excerpt from the official report of the incident (catalogue reference: T 218/451) 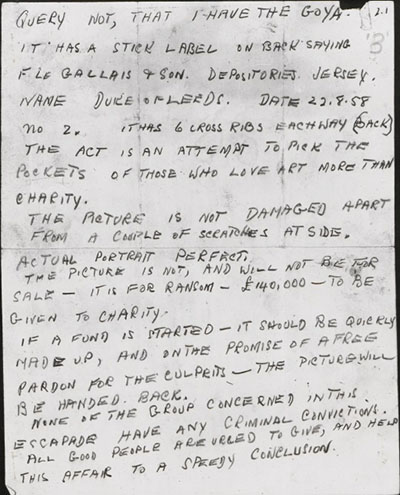 Only 19 days later the painting vanished overnight – the first work to be stolen from the gallery.  It transpired that the thief had entered and exited using an unattended builder’s ladder and a toilet window.

Enormous press coverage ensued with a £5,000 reward offered for the painting’s safe return, but no leads were forthcoming – the disappearance was even referenced in 1962 film ‘Dr No’, in which Bond notices the painting displayed in the villain’s lair.

The painting remained missing for the next four years, during which time ransom notes were received, including this one promising the safe return of the painting in exchange for a charitable donation matching the amount spent to obtain it at auction:

Although these demands were not acted upon, the painting was eventually returned, shortly after which the perpetrator gave himself up to police. Far from the master-thief that had been imagined, the culprit was retired bus driver, Kempton Bunton, whose motive for taking the painting was anger at the government spending so much on a painting rather than what he considered more pressing social causes – in particular the charging of pensioners for television licenses.

As he had never intended to keep the painting, Bunton was able to benefit from an unusual quirk in the law and only prosecuted for the theft of the frame (which had not been returned) and for which offence he served three months in prison. Bunton’s son later claimed that he was in fact the culprit and that his father had claimed responsibility to protect him from prosecution.

In 1897 Queen Victoria became the first British monarch to celebrate 60 full years of reign. Beautifully decorated congratulatory addresses were sent from institutions all over the world, such as this ornate Art Nouveau example from the Royal Institute of Painters in Watercolours. Founded in London in 1831, the institute had been granted its royal status by the Queen in 1885 and was one of the leading bodies challenging the prevailing attitude that watercolour was not an appropriate medium for serious art. 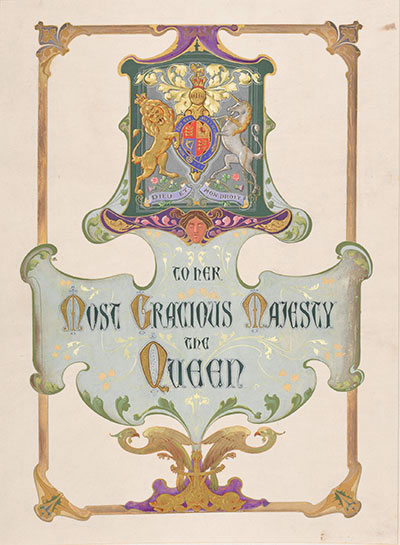 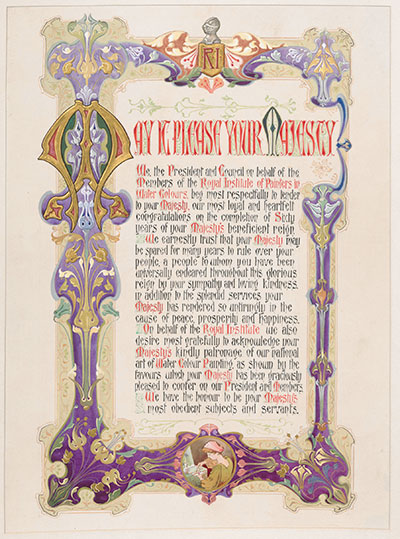 In March 1914 Velasquez’ ‘Rokeby Venus’ was attacked with a knife by suffragette Mary Robinson, who managed to make several deep cuts to the painting before being disarmed. Following this incident the major London galleries reviewed their security measures in an attempt to prevent further attacks.

Precautionary measures included the erecting of extra barriers and glass walls, an increase in guards patrolling the galleries and the requirement that visitors ‘be compelled to surrender all muffs, bags, parcels, sticks and umbrellas’ on entry. These measures did not prevent further vandalism attempts, with the glass of a further five paintings being shattered in May. 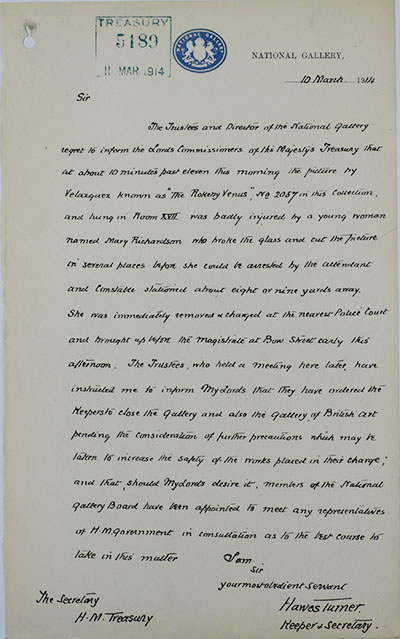 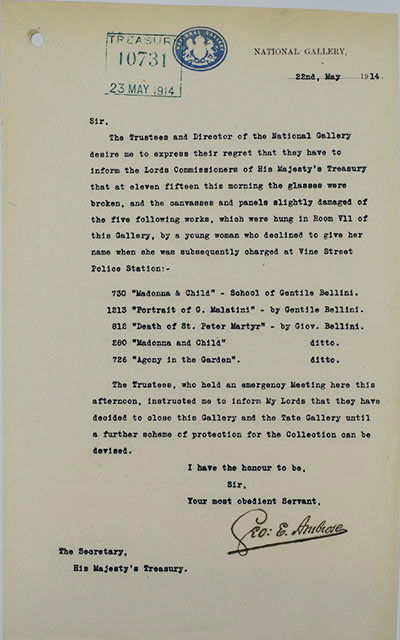 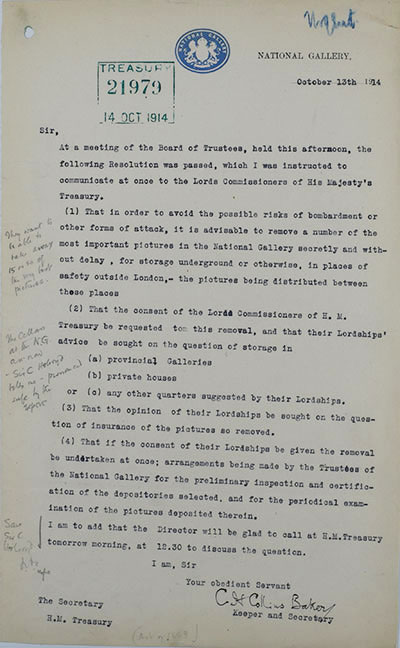 By October the entire collection was deemed to be at risk, this time from bombardment (catalogue reference: T 1/11680/22503)

However, by that October with the country now at war, the more pressing concern became the risk that the entire collection could be destroyed by bombardment, and the question arose of whether the most important items from the collection should be removed from London entirely:

‘it is advisable to remove a number of the most important pictures in the National Gallery secretly and without delay, for storage underground or otherwise, in places of safety outside London.’

The horrors of war

In 1940 artist and author Mervyn Peake, best known for his ‘Gormenghast’ novels, created this disturbing series of paintings for the Ministry of Information, intended for use as anti-Nazi propaganda.

The paintings were to advertise an imaginary exhibition of artworks by Hitler himself, the non-offensive titles of the pieces starkly contrasting with their disturbingly graphic content. 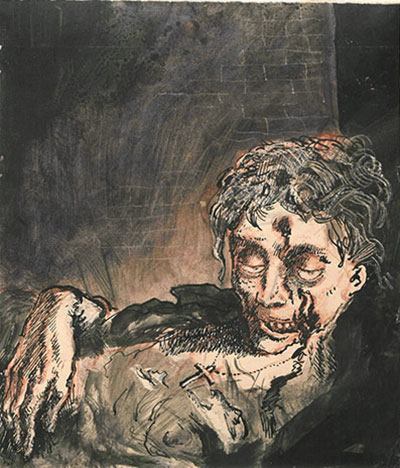 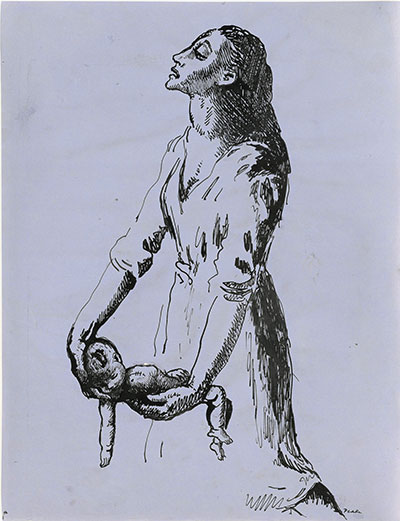 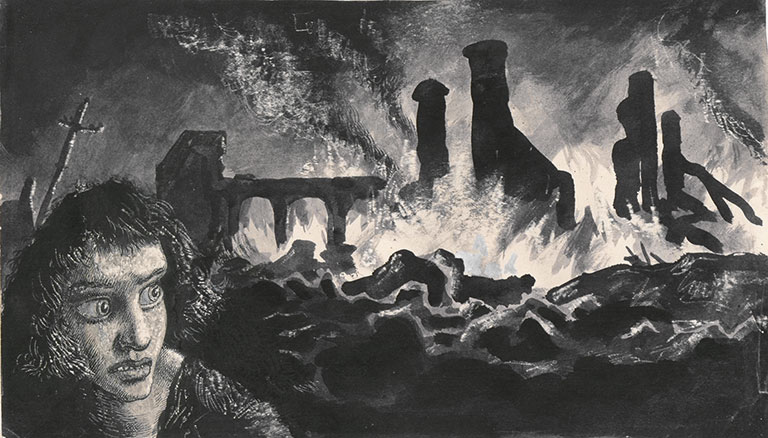 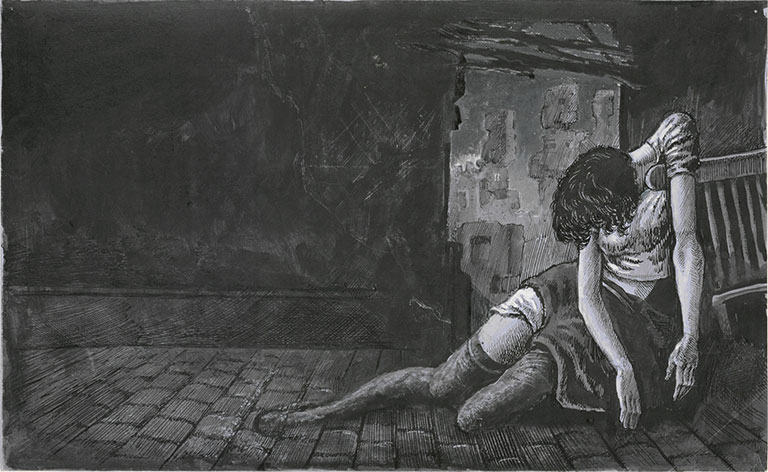 The Ministry of Information initially accepted the idea and purchased the series, but later decided against using the images. Although created early on in the war they provide a haunting foreshadowing of the atrocities Peake was to witness in 1945 when present as war artist for ‘The Leader’ magazine at the liberation of the Bergen-Belsen concentration camps.

When  Joseph Mallord William Turner died in December 1851 he intended for the bulk of his extensive fortune to be used to establish Turner’s Gift – a charitable institution ‘for the maintenance and support of poor and decayed male artists’ of England. 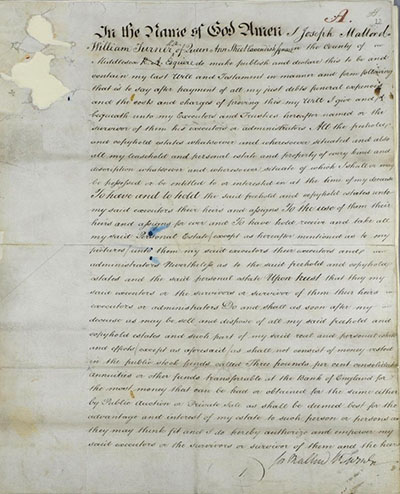 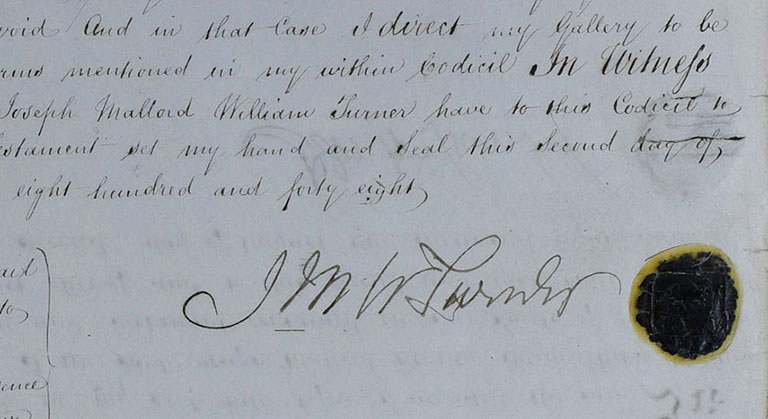 However, after many years of litigation, his cousins were successful in contesting the will, claiming his fortune and ensuring that the charitable institution that Turner envisioned never came to fruition. He had also bequeathed his finished works – several hundred paintings and thousands of sketches – to the nation, on the proviso that they be housed together in a ‘Turner’s Gallery’.

Although the bulk of his works are kept by the National and Tate galleries, his specific instruction that they be kept together has sadly not been honoured.

A preliminary sketch (or cartoon) for Da Vinci’s ‘The Virgin and Child with St Anne and St John the Baptist’ was purchased by the National Gallery in 1962 after a major appeal to raise the £800,000 price tag. 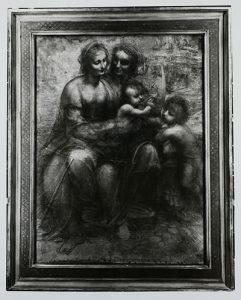 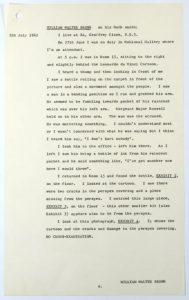 Statement of one of the gallery guards (catalogue reference: DPP 2/3491)

That same year an attack was made on the work by a man named Franz Weng, who threw an ink bottle at the piece. This broke the Perspex cover but luckily caused only minor damage to the cartoon beneath.

Upon examination Weng (who turned out to be an artist) was deemed unfit to stand trial, having also attempted to kill his wife the previous day. The cartoon was targeted once more in 1987 when it was blasted with a shotgun by an assailant wishing to express his disgust at the ‘political, social and economic conditions in Britain.’

Visit Eventbrite for information on our regular ‘Behind the Scenes’ tours, or contact us to arrange a private group tour: