Appealing against conscription? Not just for conscientious objectors

On the 27 January 1916 the Military Service Act came into force in the United Kingdom (except Ireland), making every unmarried male aged between 18 and 41 (who was not in a reserved occupation) eligible for conscription into the armed forces. 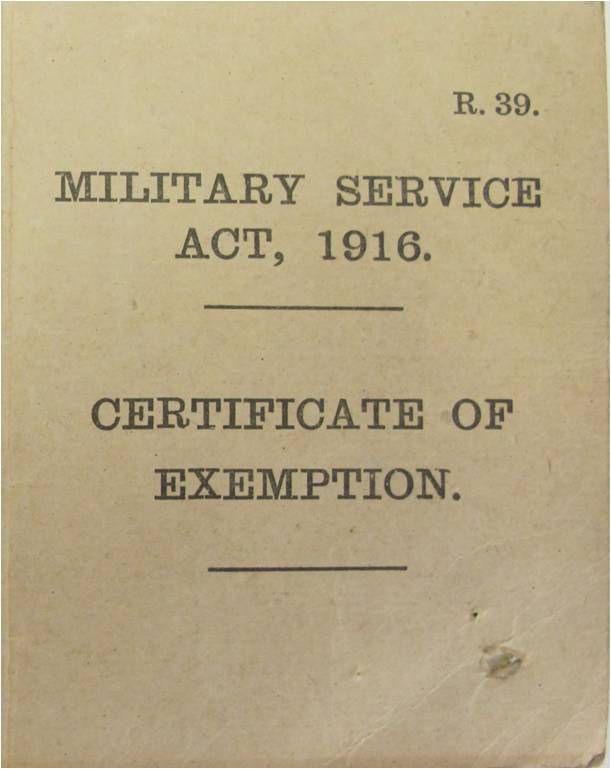 Example of a certificate

Men could apply to their local military tribunals for some manner of exemption based on a variety of grounds. Many men subsequently appealed this local tribunal decision, with appeal hearings held at County Appeal tribunals. After the war it was decided that only a sample of records from the Central Tribunal in London and the papers from the Middlesex County Appeal tribunal should be kept as a benchmark for England and Wales. It is these papers which make up record series MH 47 here at The National Archives.

These papers contain a wealth of personal information relating to the applicants, their jobs and their families. Currently the collection is underused due to its complex arrangement and convoluted indexing system. By making these papers name searchable and providing digital access we are hoping to open up these records to a much wider audience and open up another valuable First World War resource to those who have been frustrated in their search for a military service record.

In promoting this record series we hope to dispel some myths and stimulate some debate about just exactly who were the types of people who were seeking to gain exemption from military service and their reasons for doing so.

The first thing assumed, when thinking of people who were attempting to gain exemption from military service, is that the majority must be conscientious objectors. When we examined the records we found that of the 11,307 separate appeals heard between 1916 and 1918, only 577 were conscientious objection cases, just over 5%. 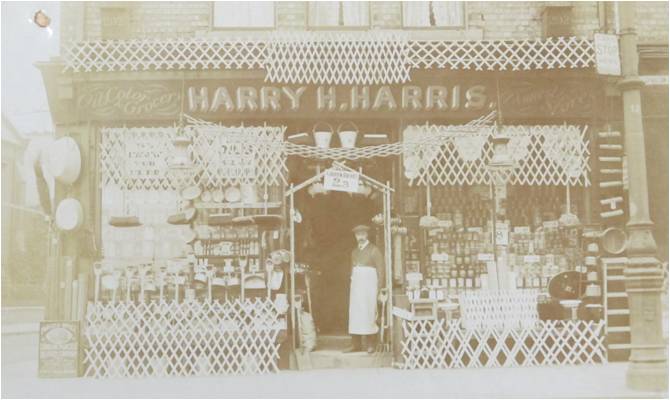 There were, in fact, seven different ground on which you could appeal including economic grounds (preserving a business), hardship (having a family to look after) or on the grounds of ill health or infirmity.

It could also be assumed that because a man, conscientious objector or otherwise, appealed that he would be likely to get an exemption. In fact, the most likely outcome, the result of 45% of appeals, was that your appeal would be dismissed. The lack of success of appeals is surprising. What it meant was that most of the men who appealed did end up in the armed forces, in some capacity.

30% of appeals resulted in only a temporary exemption. When we look at these cases it becomes clear that the majority of the temporary exemptions ran for only a month or two, usually to ensure that the applicant could find somebody to take over their business interests.

Below we have included two examples which seek to highlight the type of records in MH 47, as well as their varied content. We also hope to show how these records will link into other records in our collection or available to view at The National Archives. We have chosen to contrast two men; one man had an appeal made on grounds of hardship, the other on grounds of conscientious objection. 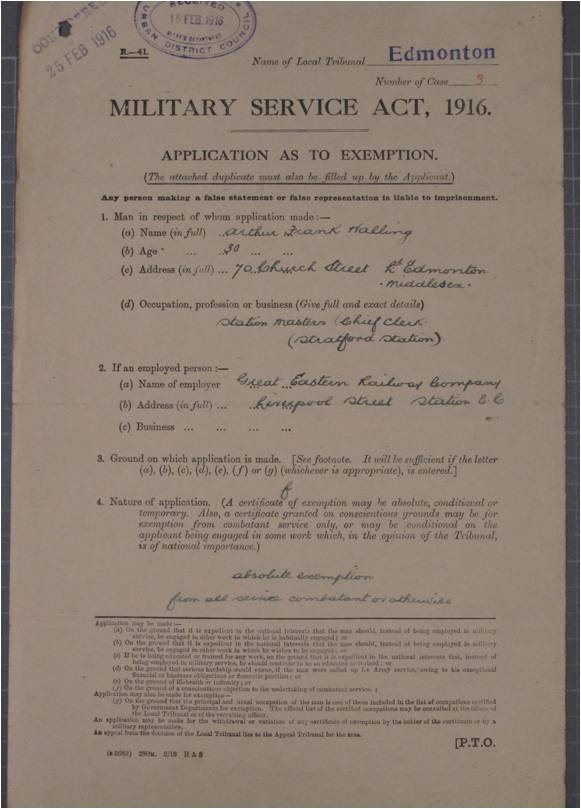 The first man, Arthur Walling, was hoping for absolute exemption as his conscience would not allow him to be engaged in any work which supported the war. 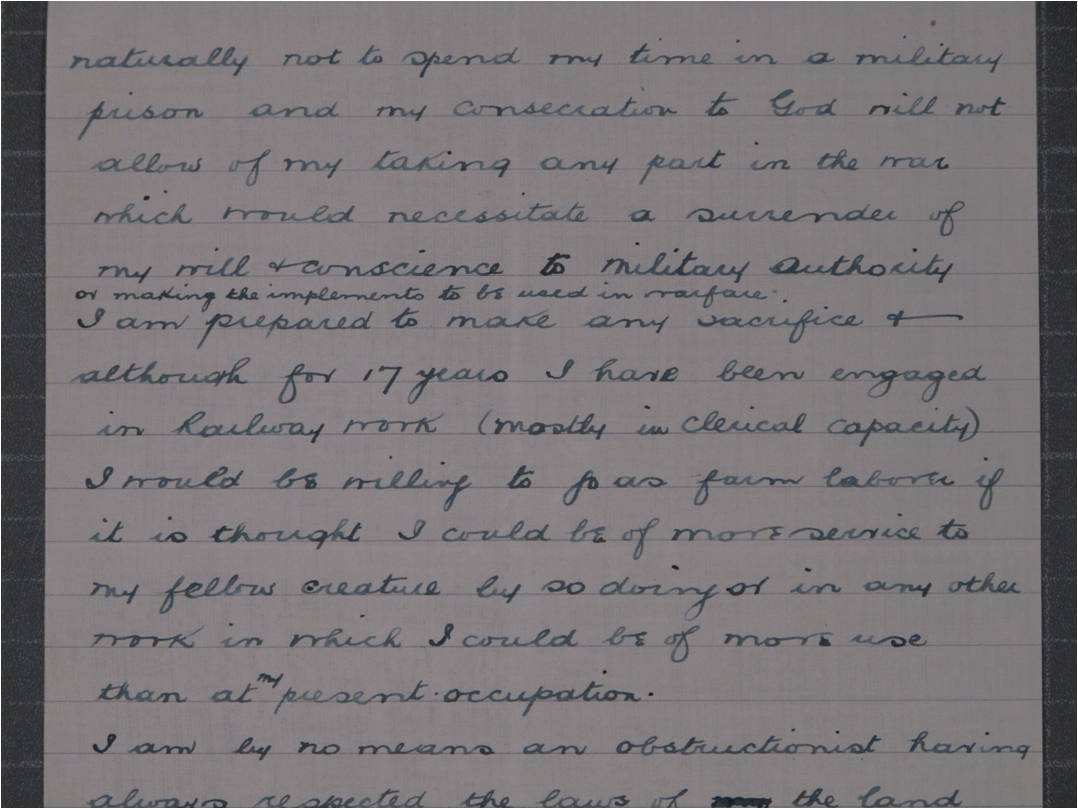 In his supporting documentation (right) Mr Walling indicates he is “prepared to make any sacrifice” to safeguard his beliefs. Arthur was true to his word as he was one of 50 conscientious objectors to be sent to France to face a Field General Courts Martial.

The register of Courts Martial (in record WO 213/9) for 2 July 1916 shows 34 conscientious objectors were sentenced to death, having their sentence immediately commuted to ten years penal servitude. 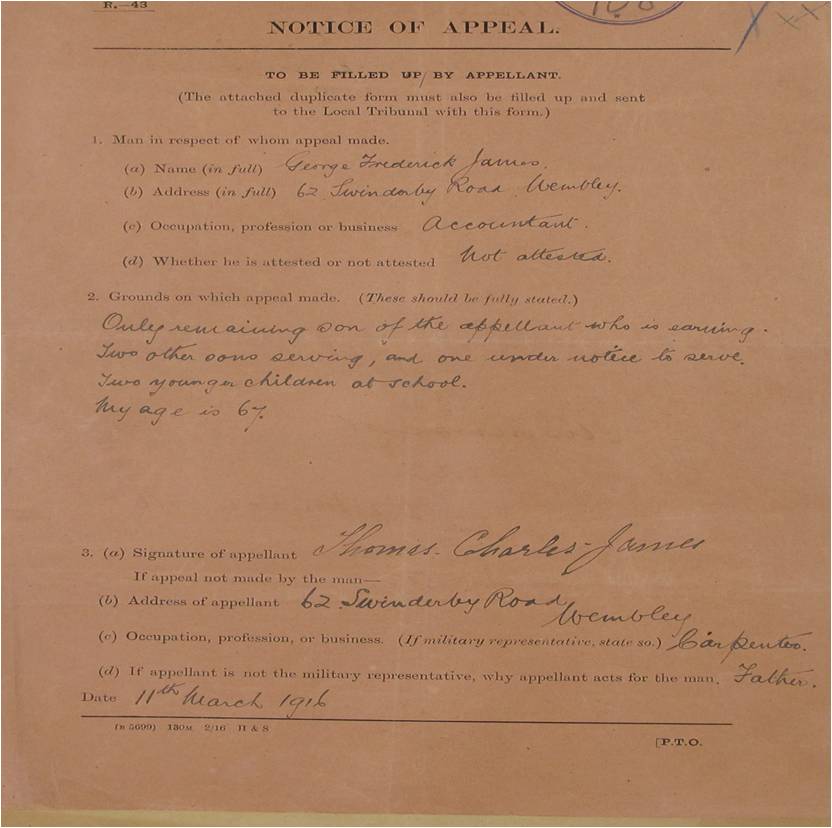 Application submitted by the Father of G F James

We can contrast the fate of Arthur Walling to George Frederick James. An appeal was made (below) on his behalf by his father, Thomas, as two of his sons were already in the armed forces and another two children were still at school. This appeal was dismissed and George was called up to fight in March 1916.

Like so many servicemen, we are unable to find a service record in the burnt records. A search on the website of the Commonwealth War Graves Commission shows that George died on 5 April 1917. The unit war diary of the 6th Battalion, West Surrey Regiment for April 1917 (WO 95/1863/1) confirms on that date six other ranks were killed during front line hostilities.

We hope that these two cases highlight the varied nature of the appeals that were heard by the tribunals between 1916 and 1918. Likewise, they give an indication into the tensions that the demands of warfare can create between a government and its people, as the need to balance industrial and military manpower requirements clash with individual personal circumstances, responsibilities and beliefs.

Over the coming months we will be blogging further updates from the project as well as interesting cases we have uncovered. To learn more about the project to digitise these records please see our project web page: nationalarchives.gov.uk/conscription-appeals

This project has been jointly funded by the Friends of The National Archives and Federation of Family History Societies (FFHS).