It is likely that you heard about the most recent royal birth through social media. Though the means of transmitting news to the public about the birth of royal babies has changed enormously in recent years, the official precedent for notifying offices and individuals about royal births hasn’t changed much. This starts with Buckingham Palace placing a framed notice on a ceremonial easel on the forecourt of the palace, a tradition that started in 1837, followed by bells which are rung at Westminster Abbey and St Paul’s.

The Home Office’s formal duties have traditionally included informing the Channel Islands, Isle of Man, the Lord Mayor of London, and other government departments. They publish a bulletin at the entrance of the Home Office; and produce a special issue of the London Gazette. They are also responsible for sending a doctor’s certificate to the Privy Council. The certificate of the birth of Prince Charles, on 14 November 1948, was signed by Sir William Gilliatt, the Royal Gynecologist; Dr John H Peel, obstetrician; Dr V F Hall, gynecologist; and Sir John Weir, the Royal Physician. Herbert Morrison, the Home Secretary, signed the note submitting the certificate to the Privy Council (catalogue reference: PC 8/1623). 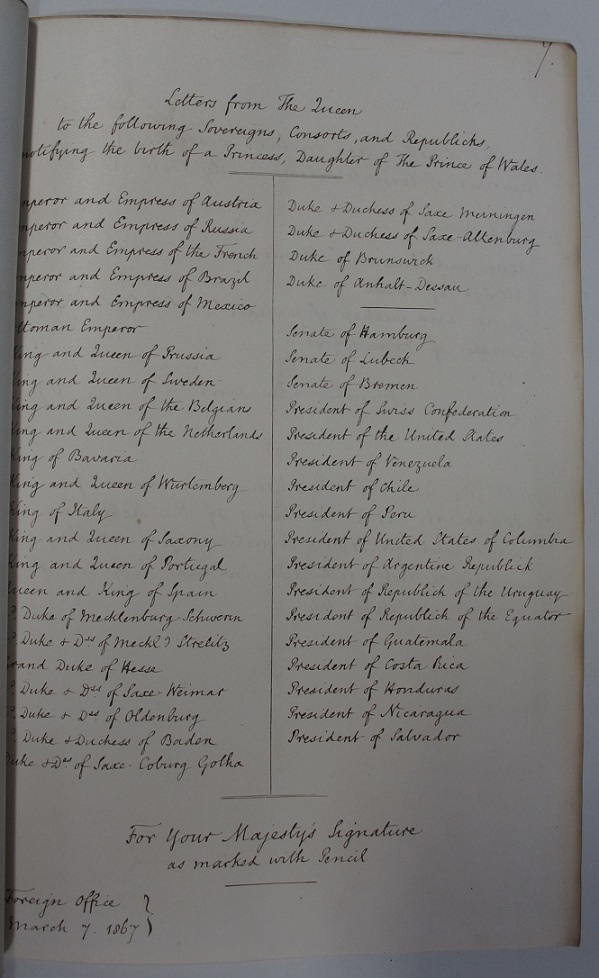 The anticipated birth of Princess Anne in August 1950 resulted in a query to Sir Terence Nugent, Lord Chamberlain’s Office (catalogue reference: WORK 21/212) regarding the traditional firing of a 21 gun salute by the Royal Field Artillery. The proposal was for a 41 gun salute at Hyde Park, and The Tower of London. A further 21 gun salute was to be fired at the Royal Artillery Garrison, Woolwich. These were to be fired simultaneously at 13.00, before sunset, or the following day depending on when the information was received, and no guns salutes were fired on Sundays.

The Treaty Department of the Foreign Office received a number of congratulatory messages following the birth of Prince Charles in 1948 from foreign monarchies, governments, and heads of state sent through the Foreign Office, and forwarded to the Royal Household.

There is no article in the King’s Regulations or Admiralty Instructions giving specific instructions to the ceremonial procedures. Research revealed the procedure of hoisting flags and gun salutes for the births of King Edward VII (1841) and Duke of Clarence (1864). No records were found for any salutes for the birth of the Duke of Windsor (1894).

The procedure for the Admiralty was to fire a Royal Salute; for guards and bands to parade during the firing, if available; and ships to be dressed with masthead flags. It was reminded that local authorities should be informed of the arrangements (catalogue reference: ADM 1/21164)

When Prince William was born in 1982, the Home Office notified the Lord Mayor of London for the ringing of bells at St Paul’s. The Scottish office informed the Lord Provost of Edinburgh, the Lord Advocate, the Lord President of the Council of Session, and the Lord Justice Clerk.

The newly-formed Welsh Office had no precedent for the notification of royal births. The Department requested advice to ensure the consistency with other departments. They consulted both the Home Office and the Scottish Office. (catalogue ref: BD 115/7).

The Welsh Office and instructions regarding the birth of a princess (catalogue reference: BD 115/7)

The procedure for dispatching telegrams was outlined in 1960, with the birth of Prince Andrew (catalogue reference: CO 1032/376). The Private Secretary to Her Majesty the Queen informed the Home Office and made the appropriate announcement to the press.

The Private Secretary also notified the Governor Generals of Canada, Australia and New Zealand, also the Union of South Africa, Ghana, and Ceylon. The Commonwealth Relations Office informed the United Kingdom High Commissioners, the presidents of India and Pakistan and the Yang di-Perttuan Agong of Malaya, whereas the Secretary of State for the Colonies was responsible for informing Governors General of Nigeria, the West Indies, and Her Majesty’s representatives in the colonial territories. The Foreign Office was responsible for informing Her Majesty’s Missions abroad and the Heads of Diplomatic Missions in London.

Sir J Gascoigne, Governor of Bermuda, enquired if the birth of Prince Andrew in February 1960 would be an occasion for a public holiday in the United Kingdom.

The Foreign and Commonwealth Office now have the responsibility of informing Commonwealth Heads of State, and the Diplomatic Missions in London.

The Chief Clerk’s department of the Foreign Office were responsible for the royal letters concerning royal births. The National Archives’ series FO 95 contain letters to and from sovereigns, heads of state and presidents. The letters are a mixture of drafts and originals, dating from 1834 to 1906.

Queen Victoria wrote to sovereigns, president and heads of state on the birth of the Prince of Wales in 1841.  A letter was sent to John Tyler, President of the United States of America, announcing the birth – an opportunity for assuring America of the constant friendship and cordial wishes for welfare and prosperity. Following the first royal tour of Canada and the United States in 1860, Mary Todd Lincoln, wife of Abraham, named a guest room in the White House after the Prince of Wales.

There are many interesting stories to find when searching the archives; particularly within correspondence between sovereigns, heads of state and governments regarding the British Royal family – keep an eye on our blog for further stories on royal events.