Today marks 90 years since the passing of the 1928 Representation of the People (Equal Franchise) Act, which finally allowed men and women to vote on equal terms. It came ten years after the 1918 act and 14 years after the announcement of an amnesty by militant suffrage supporters.

Due to their age, property ownership or, essentially, class background, some of the fiercest campaigners for the parliamentary franchise did not gain the vote in 1918.

Here a relative of Alice Hawkins, Peter Barratt, explains the extraordinary story of one suffragette for whom this was the case. 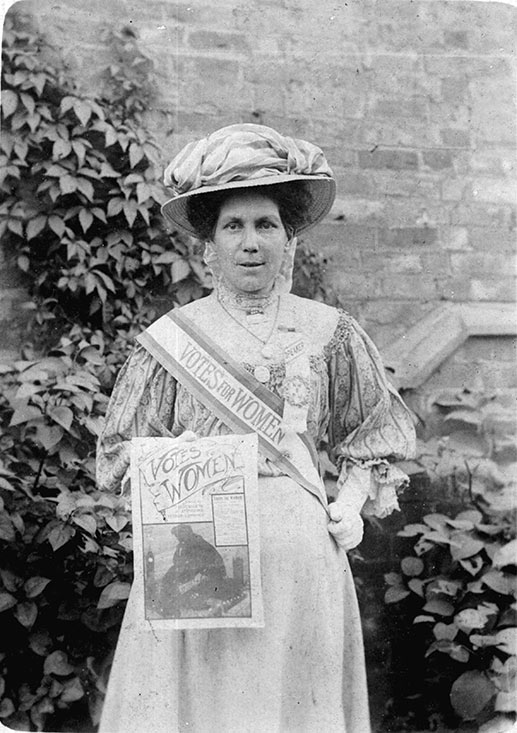 With the centenary of the Representation of the People’s Act 1918, many reading this blog will perhaps ponder on whether they may indeed have a suffragette in their family history.

However, for me personally, I have known for over 50 years that my great-grandmother, Alice Hawkins, was a suffragette who went to prison five times in her campaign for ‘the vote’. As a young boy, of no more than six or seven years of age, I would often stay with my grandfather during the school holidays: he would tell me stories about his mother and her campaigning years. At the time, I have to say that I was probably more interested in playing football outside in the garden. But thinking back to my early years, I realise that grandfather was giving a first-hand account of women’s history in the making, as he was often there to see it for himself.

Many people think of the suffragette movement as simply a women’s movement, but men did support the cause. This was certainly true in the case of Alice’s husband Alfred, and also the children as well. Alfred, my grandfather, and his five siblings would often accompany Alice on the suffragette marches in our home town of Leicester. I distinctly remember being given an account of a Sunday morning, circa 1910, when Alice was speaking on a platform in the city market place, urging the large crowd to support the women’s cause. Grandfather said Alice was heckled by a man shouting, ‘Get back to your family!’ Quick as a flash, Alice replied, ‘But here is my family – they are here to support me.’ Her husband, Alfred, and all the family were standing around the speaker’s platform, supporting mother and wife. 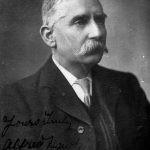 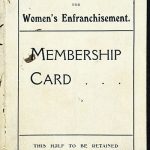 On another occasion grandfather would chuckle, telling me of the times when the Pankhurst family would send their chauffeur-driven car to collect Alice to take her off to a rally. Trying to find Alice and Alfred’s house, the chauffeur would drive slowly around the grid pattern of terraced streets in central Leicester. On its way, it would collect a large following of children, cars being such a rarity and a sight in those years. When the car finally arrived outside the house, large crowds would form; then out would come Alice in her suffragette finery and head off to a rally to speak.

Alfred even heckled Winston Churchill on one occasion on the issue of women and the vote; he was injured as he was ejected from the meeting by the stewards. A leaflet in the family archives, dated 1911, advertises the fact that Alfred was awarded £100 damages in a civil court for his ‘forcible ejection from a meeting held by the Right Honourable Winston Churchill, MP’. I asked an elderly relative some years ago whatever Alfred did with such a large sum of money, as it was in those days. She replied: ‘He drank it – Alfred and his mates were drunk for a month!’

I wish I could remember all of the stories my grandfather told me of those years, but memories fade with time. Clearly Alice had a great strength in the family supporting her cause, and I truly believe it was a key factor in enabling her to live through times of great hardship and adversity. And so, as we celebrate and commemorate the centenary here in the UK, let’s give a thought to the men who stood apart from the mainstream of society and campaigned for women’s suffrage.

Archives and Alice: deeds and words, by Vicky Iglikowski

When archives and personal family histories are brought together, they enrich our understanding of the past.

Alice was a member of the Women’s Social and Political Union (WSPU) and a trade unionist, who boldly campaigned under their motto ‘Deeds not words’. She was active in the WSPU from 1907 and was one of the major figures in their campaigns.

Following this one woman’s experience gives us an insight into how the suffrage campaigns affected the real lives of individuals.

Entry for Alice Hawkins in the index to suffragettes arrested (reference: HO 45/24665)

On 18 November 1910, Alice was one of around 300 women on a delegation led by Emmeline Pankhurst to Parliament. They were protesting against the Prime Minister, Herbert Asquith’s, decision not to allow any more time on a Bill to give approximately 1 million women the vote. This resulted in lengthy and violent clashes with the police. Following the protest, around 200 women claimed they were injured – and in some cases sexually assaulted – by the police.

This was a turning point in the movement. Suffrage campaigners believed that the government cared more about damage to property than the damage done to women’s bodies.

A submission to the Home Office by Henry Brailsford, with evidence also gathered by Dr Jessie Murray, demanded a public enquiry – dozens of women submitted evidence.

In their own words they powerfully described how they were treated by police. A code at the beginning of the document highlights the different complaints made, from ‘indecent conduct’ to ‘methods of torture’. 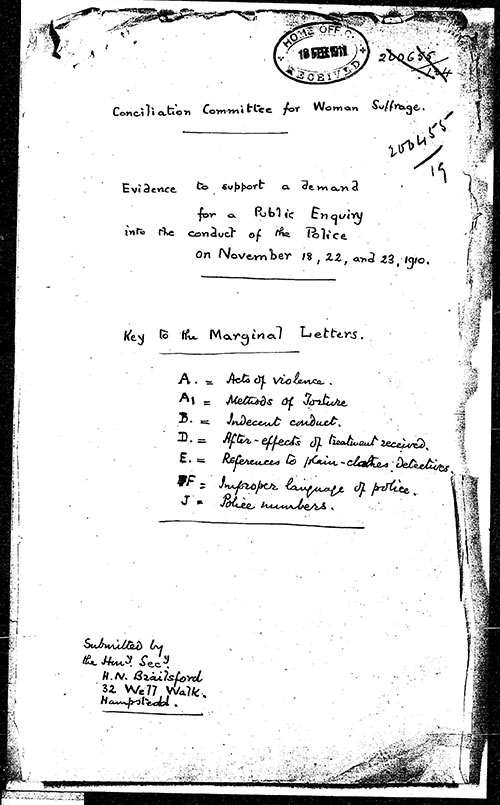 Key to evidence submitted after the Black Friday protests by suffragettes. Reference: MEPO 3/203.

Alice was one of the women to provide her personal testimony, in which she details how she was treated on this fateful day. She described being assaulted by a policeman, resulting in bruises to her arms and body:

By 14 December she states she was ‘only just getting over [the injuries]’.

In the aftermath, Alice described how ‘she could not bear it’ so went out and broke windows at Mr Harcourt’s House, who held the Cabinet post of Secretary of State for the Colonies from 1910 to 1915. 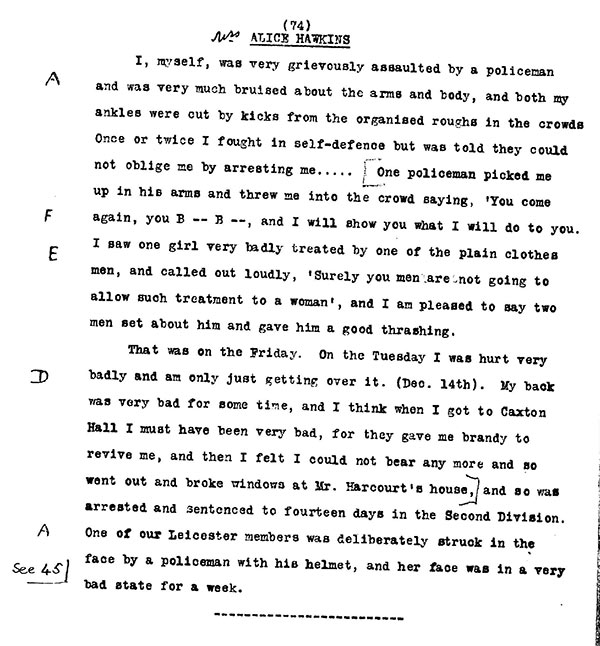 Partly as a result of the treatment they received at this protest, the WSPU increasingly turned to property destruction and other militant methods to draw attention to their cause. These shocking clashes on 18 November 1910 became known in suffrage history as ‘Black Friday’. 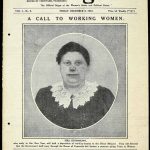 Front covers of The Suffragette appealing to working women to be part of a deputation to the Treasury and reporting on the event. Reference: ASSI52/212. 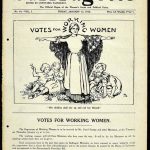 Alice was clearly determined to win the vote; she participated in protests outside Parliament and window smashing campaigns when she deemed it necessary but, like many suffragette campaigners, she also acknowledged the power of words.

In 1913, ‘The Suffragette’ issued a call to working women from across the country to be part of a deputation to the Treasury. Flora Drummond, known as the ‘General’, led this group of women to speak with David Lloyd George. 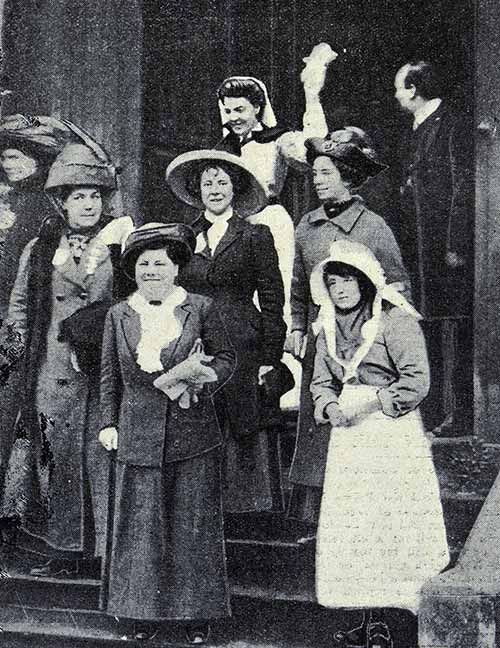 Photographs of the Deputation of Working Women in The Suffragette, 31 January 1913. Reference: ASSI 52/212.

Representing a range of trades, the deputation spoke about the struggles they faced as women and the striking disparity in wages compared to men in similar jobs.  Their aim was to articulate why, for many working women, gaining the vote was just one element of the struggle for equality. Alice was one of the women: she represented herself, but also the women workers in the boot and shoe trade in Leicester. Alongside her were fisherwomen from Newhaven, sweated workers based in London and even ‘pit-brow lasses’.

In her powerful statement to Lloyd George, Alice referenced the terrible, sweating conditions in which she worked, and the inequality in her pay compared to men doing the same job.

She talked about the irony that, under the proposed bill, her two sons would have the vote but, as their mother, she would not.

I have two sons who have been working for the country, one in the Army and one in the Navy. Those sons under this new bill – the Manhood Suffrage bill – would have votes. I, the mother who brought them into the world, have nothing.

Her testimony ends with the statement from her representing the workers in her union.

My Trades Union, which is composed of a thousand members, sends this message to you: ‘Tell Mr. Lloyd George that we demand the vote at once and we hope that when you come back, you will be able to tell us it has been granted.’

During the deputation, Lloyd George gave assurance that amendments to the Reform Bill would be carried. Despite the women’s powerful testimonies, the amendments were dropped that same evening. This was one of many in a long line of frustrations for suffrage campaigners. 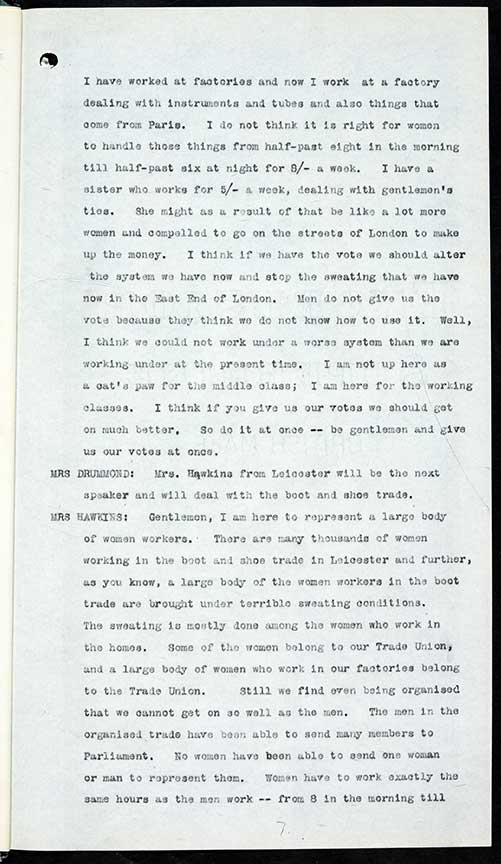 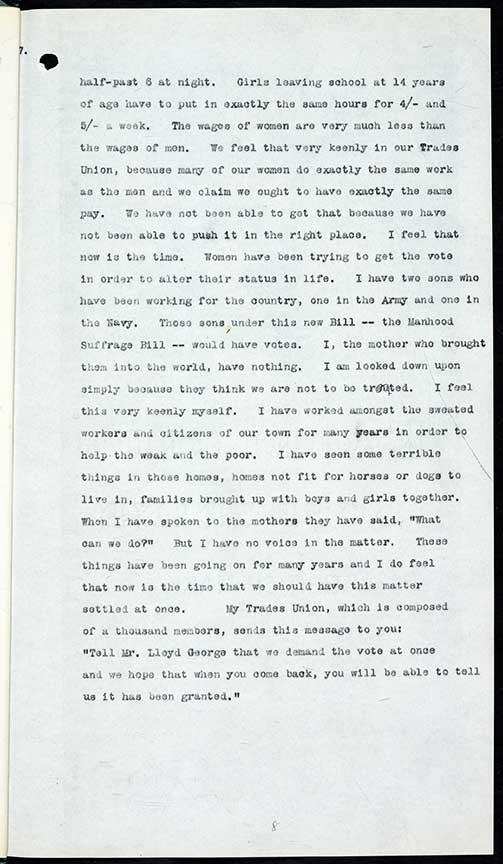 In 1918, Alice was one of the approximately 20% of women over 30 who would not have met the property qualification to vote, despite the huge lengths she went to in her fight for equality. 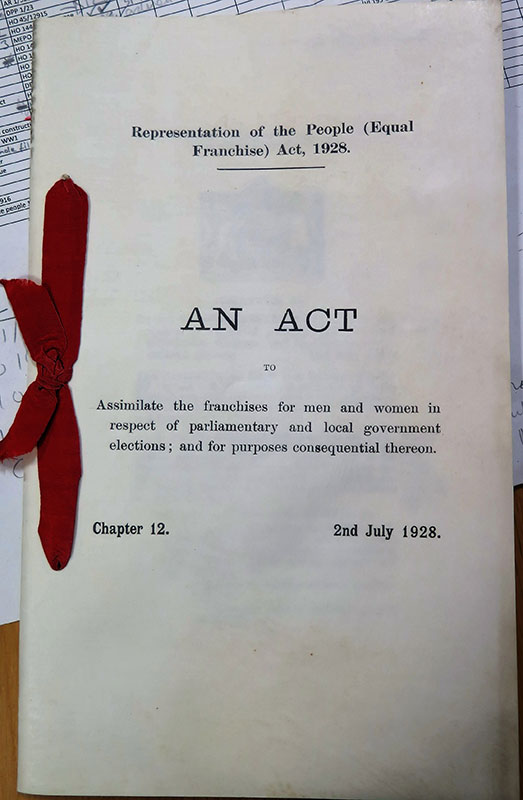 Alice won her right to vote a decade later, under the 1928 Representation of the People (Equal Franchise) Act. After her involvement in the women’s suffrage movement she continued to be a lifelong campaigner for equality through the trade union movement.

Some of the most committed suffrage campaigners were not able to vote in the December 1918 election – how did they feel? Cheated, or celebratory for the women who now could?