When most people think of the Royal Flying Corps, Royal Naval Air Service and Royal Air Force in the First World War, it is invariably of aeroplanes and pilots. Whilst it was possible for a pilot to just jump in a plane and fly off, unless he was very quick and agile when starting his plane, it usually took at least one other person to swing the propeller to start the engine. 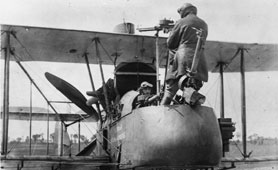 Since the advent of military aviation, all units operating not only aircraft and boats but also radar stations and a myriad of other tasks associated with aviation have always had a complement of officers and other ranks (airmen).

The records of RAF officers are in the series AIR 76 and these are easy to identify and consult as they are not only in name order, they are also online. So straight away, researching an RAF officer is made easy by virtue of digitisation of their records which are name searchable.

By systematically going through all 2,807 pieces of AIR 79, the indexing project has extracted the names and service numbers of all the men whose records are in the series and put them into the catalogue. Of the 329,000 RAF service numbers within the series, some 8,500 are not available as the individual was either commissioned, in which case the record will almost certainly not survive (you will need to look at AIR 76), or because the record is still retained by the Ministry of Defence.

It is possible to find some RFC records in WO 363 and WO 364. If a man served in the RNAS and then the RAF you will find a record but with most of the details from 1 April 1918 onwards. The earlier record of an RNAS rating will be found in ADM 188.

So it is now possible to search AIR 79 by name and/or RAF service number and find the records of the fitters, riggers, drivers, batmen etc and even a vulcanizer!