Set cookie preferences
Home > Blog > The Actor and the Student

The Actor and the Student

For today’s blog post I have selected two case papers from the many, sometimes heart-breaking stories that have come to life through the digitisation project of the Middlesex Military Service Appeal Tribunal papers from MH 47.

The two men below have two entirely different reasons for wanting an exemption from military service, each having an impact on the ones that would be left behind.

Henry Charles Hewitt was born on 28 December 1885 in Islington to Thomas and Maria Hewitt (nee Morris). 1 Thomas was a licensed victualler 2  and at the time of Henry’s baptism was living at 304 Holloway Road, in the parish of St James Holloway, Islington. 3

At the time of the 1901 census he is living with his widowed mother Maria and his uncle Charles Hewitt in Finchley. Jumping forward a few years shows Henry marring Hilda Geraldine Powell in 1908 in the registration district of Hendon. 4

Looking at the 1911 census, Henry is living with his wife Hilda and their 69 year old servant Amy Merriman; this gives Henry’s occupation as an actor. 5 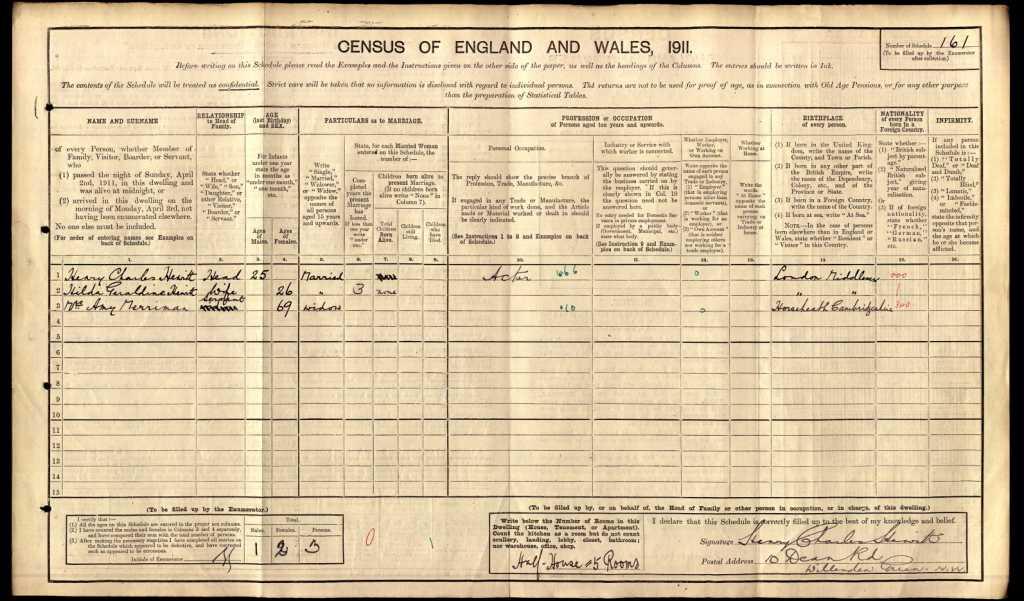 In Henry’s application for an exemption to military service he states that his profession is an actor, he appeals to the local tribunal board, giving his reason for a temporary exception from joining the army as being that his widowed mother and wife have no means of supporting themselves. He writes that he has tried his best to get an agent to take his place and look after his mothers affairs, however the agent he hired suddenly died and he requests more time to find someone else. 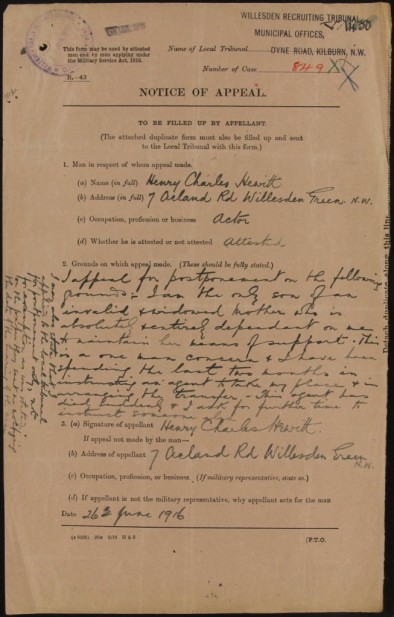 About two thirds of the original First World War service records were destroyed by bombing during the Second World War. Like many people it appears that Henry’s service record was destroyed in the Blitz; there may be a medal card for him, however there are six medal cards for a Henry C Hewitt, and with the little information I have not been able to categorically identify which one is him.

We do know that Henry survived the war and went on to take roles in films including Alexander Korda’s 1936 adaptation of Rembrandt and Brian Desmond Hurst’s 1951 adaptation of Scrooge.  Henry died on the 23 August 1968 in Hampshire. 7

Percy was a student at Latymer Secondary School and had an agreement presumably with the Middlesex Education Authority that after he returned from military service he would be granted a scholarship to go to university to train to be a secondary school teacher. However before Percy could enter college, he needed to pass in Latin, the matriculation exam and his last chance to sit the two week exam, is the 26 June 1916. His appeal for a temporary exemption begins in April 1916. 10 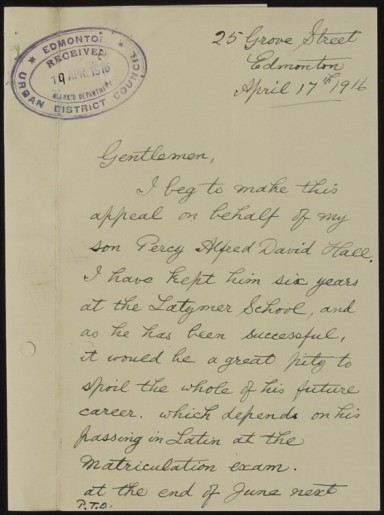 His father Evan John Henry Hall wrote a letter to the appeals board explaining that Percy had spent 6 years at the school and as his time spent there had been successful, it would be such a shame to spoil his whole future career, which would be of national importance after the war, by not getting the chance to sit these exams.

He was granted four months exemption by the Local Tribunal board; however this was deemed one month more than necessary by the Appeal Tribunal and his exemption was reduced to six weeks starting from 25 May 1916. Again as with Henry, it appears that Percy’s service record was also destroyed; however, as he had three first names we can identify his medal card, which shows that he served with the 1st London Regiment and was awarded the British and Victory Medals. 11

Percy did survive the war, and can be located in electoral registers for Edmonton and Ealing living with his parents. 12 Unfortunately I don’t know whether he did pass his matriculation exams, go to university or have the career he wanted as a secondary school teacher as I have not delved in to records that may give me the answers. Percy died at the aged 53 in Barnet in 1951. 13

The stories of the two men are repeated many times throughout the 9,500 case papers from the Middlesex Tribunal.  Each of the men appealing had their own reasons from wanting to be exempted from military service; this fascinating set of records has given us a glimpse through a window of what it was like for men and their families on the home front in the midst of the First World War.

Don’t forget to take a look at our web page for more information about the project, the people and related research guidance.