Across the desert in a Model T

It is a given (in a more literary moment I might say a truth universally acknowledged) that in these straitened times we booksellers are always up for a book launch. Intimate a free glass of wine and on the sniff of a canapé we shake out our best cardigans, climb on our bikes and cross half of London. Thus it was the other evening that a generous invitation saw me at the Royal Geographical Society in Kensington for the launch of Light Car Patrols 1916-19. It was a total treat. I would even go as far as to say that I would have been happy to attend without refreshments. 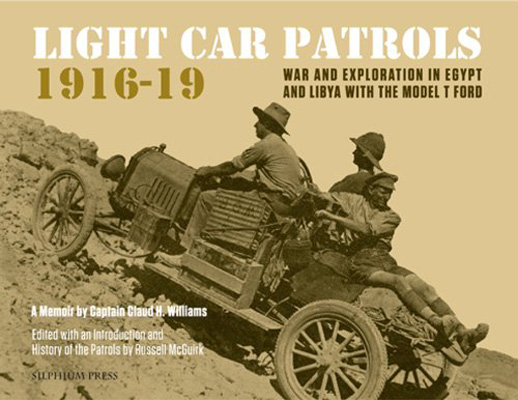 Light Car Patrols is an intriguing book. One of those rare items which manages to combine personal experience and historical fact on a topic that sounds as though it was dreamt up by Monty Python. It covers the activities of the Light Car Patrols in Libya and the Western Desert during the First World War.  Say the Western Desert and instantly you think of Panzer Tanks and Rommel but cast your mind further back. Imagine endless sands, early Model T’s bumping over the dunes, knobbly knees beneath khaki shorts …… the past is a different country (in this case literally).

Captain Claud Williams was a New Zealand cow cocky (farmer) with a can-do attitude. His memoir is fresh and engaging and will give you the true feel of how it was. I don’t need to tell you that there are lots of First World War memoirs out there and, with the upcoming centenary, many more to come. But I promise you there will be nothing like this. A group of men crossing the western desert in souped-up Ford – is this not the dream of every young boy? That these cars ran at all is amazing, that they took on the Turkish-led Sanusi army and patched up bullet-ridden petrol tanks to bump across ground which Williams describes with characteristic understatement as ‘infernally rough’ is truely outstanding. Russell McGuick has prepared an excellent history of the Light Car Patrols which shows how they prefigured some of the famous Libyan Desert explorers such as Count László Almásy (fictionalised in The English Patient) and Ralph Bagnold.

Anyway, to return briefly to the launch, Williams’ grandson shared some memories about his grandfather’s struggle to get his memoir published and then we descended steep stone stairs, through corridors smelling deliciously of book, to the reading room. Here, Williams’ original photo albums, some detailed early maps and even a sun compass were laid out for us to peruse. There was even a typescript of the memoir. I know this is ephemera and the book is the thing but this adds an extra dimension and makes the words on the page so much more real.

Let me say now if you get an opportunity to go to the Royal Geographic Society Reading Room you should. It is fabulous – a place imbued with the romance of Burton and the ghosts of Phineas Fogg and Passepartout, the perfect hangout for the gentleman explorer. There are Showcase Events on Desert Exploration by Camel and Car in December which are open to the public – have a look at www.rgs.org or email showcase@rgs.org for details and put one in your diary now.