Aces High in the Bookshop 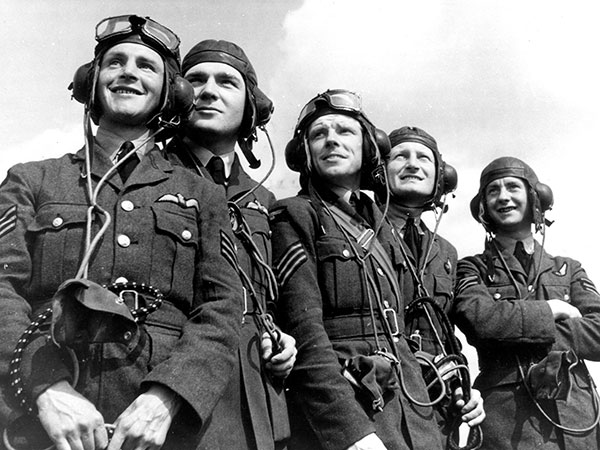 An iPod malfunction on the drive up to Stratford which froze the playlist in an endless loop of tracks beginning with ‘A’ has resulted in me having Aces High stuck in my head all this week. It could be worse of course, the playlist being nothing if not eclectic, a couple of letters later could have seen Cash’s Ring of Fire warring with Costello’s Watching the Detectives or a bizarre marriage of Randy Newman and Neneh Cherry…However, it is particularly timely too as Ron Goodwin’s stirring march was the theme tune to the great film Battle of Britain starring Michael Caine and Trevor Howard and now is so the moment, 75 years after the event, to revisit the iconic movie and read up on this first major campaign to be waged entirely in the air.

I’m generally more of a First World War girl in my passions (mud, disillusionment and great poetry) but you cannot deny that the fly boys of the Second World War had the glamour. And indeed the better music – brief pause as Aces High is momentarily replaced on the internal soundtrack by a medley of Andrews Sisters numbers. An interest in gentlemen in peaked flying caps was established early on via the exploits of Squadron Leader James Bigglesworth. The Biggles volumes were my brother’s really, but books were fair game in our household and if a book was left lying about (and my brother never put anything away) you could pretty much guarantee I would read it. The Biggles stories had more to them (by degrees) than the subtle and insightful exploration of the complexities of war exhibited by the Commando Comics ‘Die Englander’. The daring adventures of 666 Squadron, Biggles, his cousin Algy and the monocled Bertie are still well worth a read today if you have a spare half hour. If you are wedded to the Second World War though do make sure you check the blurb on the back jacket. Biggles had an implausibly long fighting career which spanned both World Wars and post-war assignments with the Special Air Police so if you are not paying attention you can plunge in expecting Spitfires and find our intrepid hero taking up a Sopwith Camel.

Men of the Battle of Britain, by Kenneth G Wynn

The Hughes family wasn’t really RAF material, I’m afraid, so our family history does not include any flyboys. My dad was in the Merchant Navy and my mother was at school for most of the war. That was a London school where the air raid sirens went just as you arrived and most of the day was spent in the shelter playing canasta (she is a wicked card player to this day). But if you did have family members who were involved in the Battle of Britain and you want to find out more a good place to start your research is with a look at Tracing Your Air Force Ancestors. This helpful book explains where to find and how to make best use of records for those who served in the Air Force and its previous incarnations, The Royal Flying Corps and the Royal Naval Air Service. Most excitingly a new edition of Men of the Battle of Britain has just been published to coincide with the 75th anniversary. This is a tremendously impressive reference work which includes the service records and a great many photographs of the pilots and other aircrew who flew with the Royal Air Force between July and October 1940.

For those interested in reading about the topic there are a plethora of books coming out around the anniversary. Holland, Bishop and Bungay have all written good accounts of The Battle of Britain. As a bookseller, Bungay gets my vote purely because his title The Most Dangerous Enemy sets it apart from the line of books on the shelf all entitled The Battle of Britain.

This tendency to pedestrian titles is a feature of the rise of internet book sales I fear. Where a canny bookseller could draw a browser’s attention to a book on the basis of its subject the dominance of keyword search has reduced authors to stating the obvious for fear of being overlooked in the morass of titles on offer online. It makes shelving very dull.

To those looking to delve further Sinclair McKay’s Secret Life of Fighter Command is interesting in that it examines the experiences not just of the pilots but the wider operations of Fighter Command. Using diaries, letters and interviews it provides a fascinating insight into the personal rivalries and different approaches at work within Fighter Command which led to the removal of Air Chief Marshall Sir Hugh Dowding – the man who ‘Bomber’ Arthur Harris described as ‘the only Commander who won one of the decisive battles in history and got sacked for his pains’.

In getting under the skin of a period it is always valuable to look at original sources often as much for what they don’t say as what they do. The Pen and Sword Despatches series includes Defending Britain’s Skies which covers the period of the Battle of Britain and contains Dowding’s official accounts of the Spitfire Summer of 1940, as submitted to the Secretary of State for Air in August 1941. Read this against the propaganda leaflet issued for the general public to explain the conflict. Hundreds of thousands of copies of this leaflet were sold and it is one of the original documents which helped to shape the image of The Few in the minds of the British public.