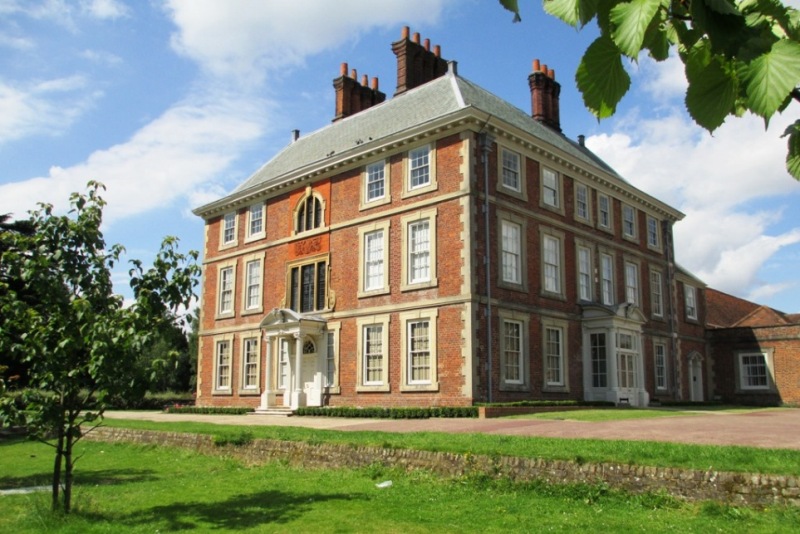 I wish this was my house but, sadly, it isn’t. It’s Forty Hall, a Grade I listed manor house now owned by the London Borough of Enfield. It was originally built in the early 17th century for Sir Nicholas Rainton, a leading haberdasher who later served as Lord Mayor of London. The house has been a museum since 1951 and recently re-opened following a complete renovation and refurbishment.

I thought it would be interesting to find something about Forty Hall among our records so I decided to look it up in the Valuation Office survey. This survey was carried out in the years leading up to the First World War to assess the base rate for a new property tax called increment value duty, which had been introduced under the Finance (1909-10) Act 1910. Although increment value duty proved controversial and the legislation was repealed in 1920, 1 the surviving records of the survey now have a second ‘life’ in the archives. They are now one of the most popular sources for house history and local history, and are often used by family historians and professional researchers too.

Finding Forty Hall in the survey was a two-stage process. Firstly, I had to identify the relevant map among the records of the survey. These are printed Ordnance Survey maps annotated by hand to form an index to the related field books. Secondly, I had to use the plot number I had found on the map to look up the field book entry containing the details of the individual property.

To find the map, I went to the Valuation Office map finder tool in the Labs section of our website. I searched for the place-name Enfield and clicked to select the map sheet that includes Forty Hall, which is Ordnance Survey 1:2,500 County Series sheet Middlesex II 15. 2 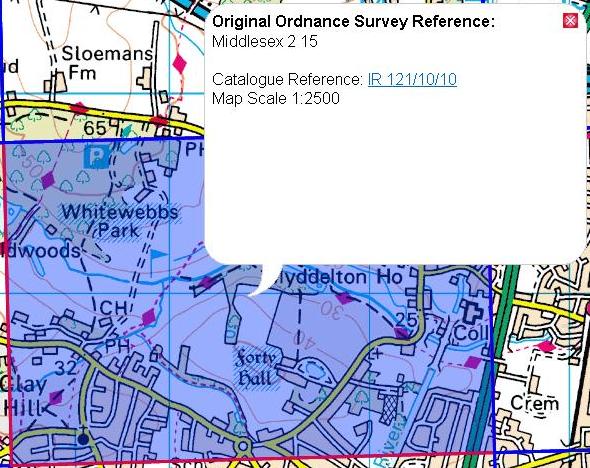 The maps themselves are not available online, so I made a note of the relevant document reference (which is IR 121/10/10) and placed an order to view the original map in our reading rooms. When it arrived, I looked for the handwritten plot number for Forty Hall, which turned out to be 2879. 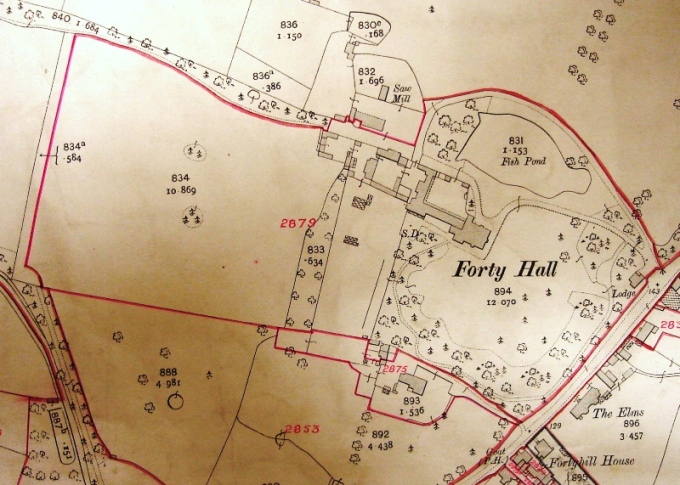 The plot numbers are normally handwritten on the maps in red ink. (Detail from IR 121/10/10)

Knowing that each field book normally includes 100 properties, I searched Discovery, our catalogue, for the one covering Enfield plots 2801-2900. 3 This proved to be IR 58/29943. I placed an order for this to come to our reading rooms and, when it arrived, I turned to entry number 2879.

The entry dates from 18 July 1913 and names the occupier as Colonel H F Bowles and the freehold owner as H C B Bowles. The yearly rent is noted as just £1, obviously far less than the market rate. This, coupled with the fact that the tenant and landlord share the same surname, suggests that they were related and that the rent was only a token gesture. A description of the property, consisting mainly of a list of the rooms, reveals that there were three separate WCs.

As well as the conventional dining, drawing and smoking rooms, the ground floor of the house includes an intriguing ‘pillar’ room. (Detail from IR 58/29943 entry 2879)

Much of the rest of the entry is concerned with calculating Forty Hall’s taxable value. There is a note that the whole estate (apparently including several areas that were assessed by the Valuation Office as separate plots) had been sold in 1896 for a little over £21,000, and another £8,000 had been spent on improving it. Coincidentally, £8,000 was also what the house and its immediate grounds were judged to be worth in 1913, although only £3,000-worth of this was actually liable for increment value duty under the complicated assessment rules.

It’s always worth comparing Valuation Office records with the 1911 census, as the two sources are very close in date and often include complementary or overlapping information. When I looked up the census form for Forty Hall, I found that, although the address page names Colonel Bowles as the head of the family, he was not at home on census night. 4 The only named occupants are five servants, including a young butler, William Batten, who completed the form in his employer’s absence. I did, however, find a Henry Carington Bowles Bowles, aged 80, living nearby at Myddleton House with his wife, a grown-up son (Edward Augustus Bowles) and servants. 5

William Batten, the butler, originally made a mistake on the census form and listed himself as 'Head' of the household. (Detail from RG 14/7421 schedule 68.)

To learn more about H F Bowles I turned to a published source, David Pam’s three-volume History of Enfield. This confirms that Henry Carington Bowles Bowles purchased the estate for his elder son, Henry Ferryman Bowles, after its previous owner had died. 6 The house was extensively altered before the younger Henry and his family moved in, which explains what happened to some of the £8,000 recorded in the field book as spent on improvements. 7 I also learnt that the younger Henry Bowles had served as Enfield’s MP between 1889 and 1906. 8 He was to be re-elected to Parliament after the First World War and later became a baronet.

There is always a lot more to be said about the history of a house and its residents than can be squeezed into a single blog post. I hope to use future posts to explore further records relating to Forty Hall or some of its inhabitants.

Start your own research by looking at our brief online guide to researching houses and our in-depth guide on the Valuation Office survey.

Find out more about researching historic buildings on the Building History website.