A light bulb moment – and a lost government ‘first’ is found

The previous blog from the UK Government Web Archive, brought to you by my colleague Claire Newing, took you back to the nostalgic 1990s. I’ll be mostly continuing Claire’s story, but, apart from a slight digression to 1858, looking at a more recent era of government technology.

In the early days of websites some folk were never wholly convinced of the value of archiving publications that could be obtained from elsewhere. Archivists like to deal in stable, certain things called records; you know where you are with a nicely labelled and dated government file, or even a fragment of medieval parchment, unchanged for centuries. Hence a whole debate went on around whether or not a website was a record; maybe it was a medium for documents that were records – or maybe it wasn’t. Happily The National Archives didn’t wait for the outcome; we went ahead and captured government websites anyway. Meanwhile, as the record debate raged, a further complication appeared: the web became an interactive medium with technologies bundled together as Web 2.0: blogs, wikis, crowd sourcing – web users could interact with the content, adding their own thoughts to pristine web pages. In the event, Web 2.0 brought with it a demonstration of the long term value of archiving website material, although it didn’t seem like it at the time.

If a website was a government record, well, here were people, members of the public from anywhere on the planet, actually changing that record. And anyway, how could something as informal as a blog be a record?

Nonetheless, in a small way at first, government began to blog. It seems commonplace now, but it was only five or six years back that the first Ministerial blog was posted by David Miliband as Minister of Communities and Local Government at the Office of the Deputy Prime Minister.

It was long thought that the ODPM blog was lost to posterity, as David Miliband was shortly afterwards posted to Defra, taking his blog with him. But researching in the UK Government Web Archive for today’s post, I found that a Defra crawl has picked up the links back to ODPM, and by clicking on the ‘posts by category ’ tabs it looks as if all, or nearly all, of the lost first ministerial blog is there. 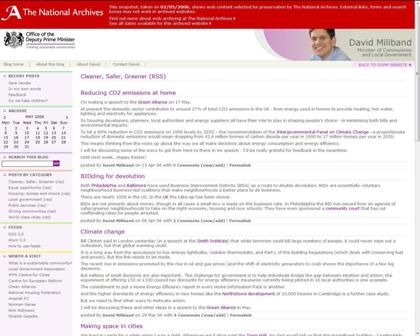 Here we had a minister actually inviting, and getting, online comments from the public. The ordered world of the civil service didn’t come to an end, and gradually civil servants themselves began to blog. There is a link on our Blogroll to the Foreign and Commonwealth Office: one of the earliest and most celebrated government blogs; in part because the Ministerial blogger David Miliband became Foreign Secretary, and in part because the nature of Foreign and Commonwealth Office business  – needing to maintain contact with staff in remote embassies, has always had an interest in exploiting new communications technology. The 19th century Foreign Office was an early adopter of the telegram for government business; but was also cautious about its implications. In 1858, the then permanent secretary Edmund Hammond, wrote:

‘I confess I dislike the telegraph very much. In the first place nothing is sufficiently explained by it. It tempts hasty decision. It is an unsatisfactory record for it gives no reason. It is bad for the minister who leaves no justification of the ground of his decisions and it is inconvenient in a government like ours to have insufficient means of placing facts and figures before parliament.’

Lord Palmerston, the gunboat wielding foreign secretary of the day, seemed to embrace the use of the telegram without turning a hair; in his letters to the cautious Hammond (preserved here at The National Archives in FO 391/ 7), there are several instructions from Palmerston ‘to telegram’, if the crises of the day warranted the urgency.

When blogging technology was starting to take off, one of the crises of the day was the Zimbabwe elections and the riots in Harare in 2008. Remember that? It was only four years ago. Conditions in Zimbabwe were such that even the BBC could not get into to the country to report directly on events. But from inside the British Embassy, two FCO staff, Philip Barclay and Grace Mutandwa began to blog about what life was like as the election mayhem went on around them.

(Use this link to the archived FCO blog to read it all): 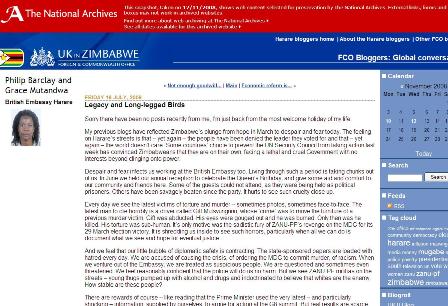 I found myself caught up in their story so simply and vividly told. I even began to worry about them if they hadn’t posted for a while. They were certainly my light bulb moment as to how to demonstrate the value of what were doing with web archiving; it was surely self-evident that this stuff needed to be captured for posterity. Indeed, I rather felt as if we owed it to the bloggers to ensure that posts they put out under such circumstances shouldn’t be lost, for the blogs had no paper version in a neatly labelled and dated government file, they only existed temporarily on  a neatly labelled and dated government website.

The lights have gone down on the Harare blog; Grace’s final post was in March 2010. Philip’s blogs formed the basis of his book: Zimbabwe: Years of Hope and Despair. But a book, however good, somehow lacks the immediacy that a blog, even in retrospect can convey. Some of Philip’s best blogs are featured on his personal website, but without of course, the FCO context.

If you click now on the Foreign and Commonwealth Office blogroll link, you won’t find any mention of it at all. On the live FCO site it is as if the Harare blog had never been.

The world has moved on to worry about the Arab Spring, and the Euro crisis. But if the world should rediscover an interest in contemporary accounts of the Zimbabwe elections of 2008, we have them waiting in the UK Government Web Archive.