A chance of greater safety and health?

Less than one month to go until ‘Files on film’ closes!

In case you’ve missed it, we’re asking people to respond to a selection of documents by making a short film and entering it in our competition. Entries will be judged and the winner and runner up awarded a cash prize, with the winner appearing on our website.

It’s open to everyone and films can be made on anything from a mobile phone to a full studio. It’s the ideas that count!

Previous blog posts have covered some of the documents included in the competition, such as a draft copy of ‘A West Indian in England’ from the 1950s and records of pauper children sent to Canada in the 1880s.

A selection of documents included in the 'Files on film' competition.

However, there are many more to choose from, representing diverse or ‘hidden’ histories in our collection.

For example, one file includes discussions surrounding the needs of disabled children in evacuation plans during the Second World War. It provides an insight in to the position of disabled people in British society at the time. It is interesting, for example, the groups of children that were considered under the general term ‘handicapped’ (this was the terminology used at the time). This included children who were deaf, physically disabled or with learning disabilities.

Some children considered too severely disabled to be cared for elsewhere were not evacuated at all and were left at home. For others, it was decided that those with certain disabilities should be housed together, even if it meant separating families. For this purpose, plans were made for the children to stay in places such as stately homes or requisitioned holiday camps on the coast.

This particular file, HO 205/4, entitled ‘Anderson shelters: provision in evacuation camps for physically and mentally handicapped children’ indicates the concerns raised about placing children in such holiday camps. At a time when posters in London exclaimed ‘Mothers send them out of London; Give them a chance of greater safety and health’, it was considered that:

“a very serious position would arise both on compassionate and political grounds if such a camp were bombed or machine gunned from the air in mistake for a legitimate military objective before any measures had been taken to afford protection to the children.”

A huge understatement. The file then goes on to discuss how this protection should be provided, considering shortages in labour and materials. A design was eventually put forward that was considered feasible for the children and their teachers to build themselves as:

“…in the circumstances of a war, [the children might] be expected to give a hand in their own protection subject to … safeguards.” Anderson shelters “would probably be unobtainable and … sections are too heavy to be managed by teachers and children” and “trench digging was an unsuitable activity for children of this type in view of the risk of falls of earth as trenches got deep.”

The following rudimentary plan is included in the file: 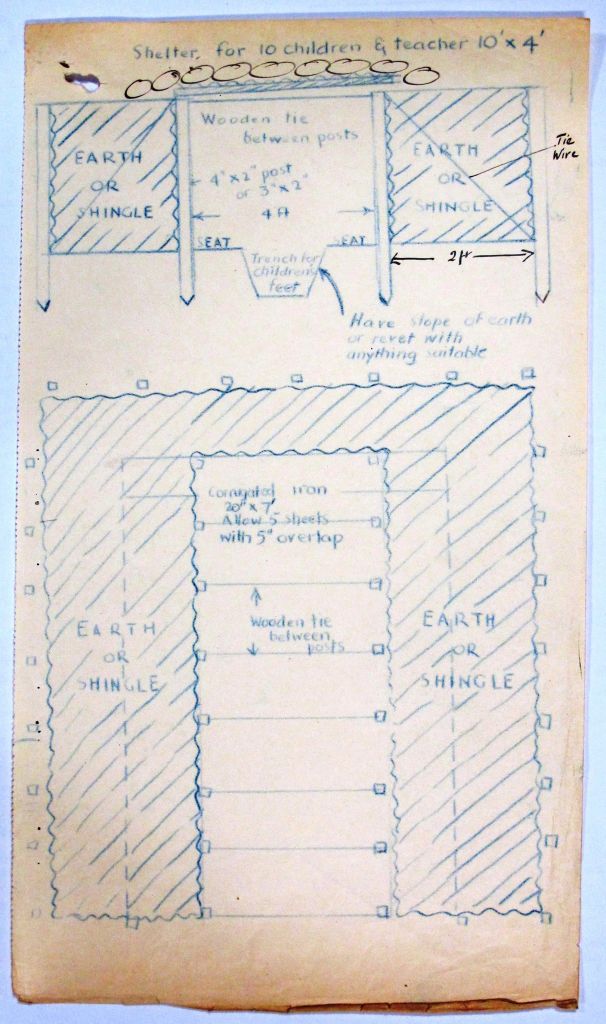 The shelters were designed to make use of the limited supplies (corrugated iron, shingle from the beach and a small number of sandbags) and the labour available (the able-bodied children, teachers and some local Evacuation Officers) in the most effective ways. What they didn’t address to any great degree, was the potential for the camps to be mistaken for military bases from the air – arguably putting the children in even more danger.

The experiences of a disabled child as part of the evacuation process, and the very real danger of this military connection, is described in this eye-witness account gathered as part of an oral history project by the BBC. These stories are not as well known or well associated with the history of evacuation during the Second World War as others, and it is these experiences we want to highlight.

Recently the plans for evacuation along with the wider position of disabled people in British society at the time were discussed in an episode of ‘Making History’ on BBC Radio 4, “Worth saving?”, with Dr Julie Anderson, a member of our User Advisory Group and a judge for Files on film. I highly recommend the programme for further information about how disabled children were considered at the time. Alongside this, another BBC radio series, ‘Disability: A New History’  is excellent for bringing the subject in to the spotlight.

We hope to continue this theme of bringing underrepresented histories in to the mainstream by encouraging discussion and re-interpretation. For more information about the competition and the files selected, see our website. We look forward to seeing what inspires you…