September 1752 was a very short month. In fact, it was 11 days shorter than the average September, to bring the United Kingdom into line with most of the rest of Europe. In fact, there were three separate calendars in use in 18th century Europe; Catholic states had generally adopted the new (and astronomically more accurate) Gregorian calendar in place of the Julian calendar the 16th century, Protestant states took it up in the 18th century while the Orthodox Christian countries of Russia, Greece and the Balkan states did not come into line until the early 20th century.

This can lead to misunderstandings over dates in historical documents, especially before September 1752. In that year, 2 September was immediately followed by 14 September, which must have caused some difficulty for anyone for whom one of the ‘missing’ days had some significance, like a birthday or a legal contract. As well as the loss of 11 days to bring the days into line with those countries already using the Gregorian calendar, the other major change adopted was that the start of the year was now 1 January, and not 25 March, or Lady Day.

If you look at early church registers of baptisms, marriages and burials you can easily see when the new year begins, as in this example from the baptism register of the Independent chapel at Wrentham, Suffolk. But if you see a reference just to a single entry dated between 1 January and 24 March, perhaps on a family tree, it might not be obvious whether the date is exactly as it appears in the register, or has been adjusted to conform with the Gregorian calendar. This is where the ‘double-dating’ comes in. To avoid any ambiguity, the correct way to express one of these dates is in the format ‘20 March 1698/99’. This register also provides an interesting example of ‘double-dating’ at the bottom of the page, in acknowledgement of the fact that there was an alternative system of dating in existence.

From 14 September onwards dating is a much simpler business, but there was still scope for confusion. Countries where Orthodox Christianity prevailed continued to use their own calendar for much longer, so dates of events taking place in those countries need to be treated with care. Registers of British consulates and churches in those countries habitually used both dates for events registered there, such as this entry from the register of the British consulate in St Petersburg recording the death of Henry Thornley, who died on 19 or 31 March 1872. 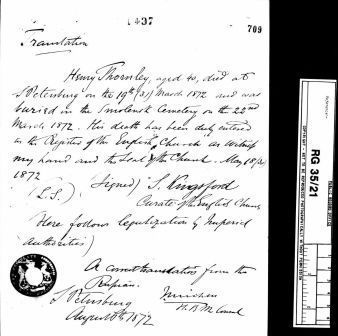 Nowadays the Gregorian calendar is in general use, so you might think that the question of expressing dates was straightforward and unambiguous. But of course it isn’t. We may all use the same calendar, but in the English-speaking world there is still a major cultural divide: dates expressed entirely numerically have different meanings on either side of the Atlantic. In the USA they use the format ‘month/day/year’ while the British habit is to use ‘day/month/year’. This is fine if the day is 13 or above, but otherwise it is ambiguous, so that 1/12, for example, could be 12 January or 1 December, depending on your location.

So that is why the good genealogist, or any kind of historian, will never express a month in figures unless forced to do so when filling in an unforgiving online form, and when they do, they wince.