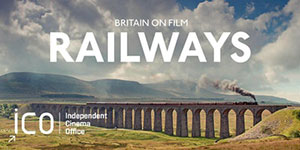 Horatio Holland was only ten years old when he received 12 strokes of the birch on his bare back in 1867. This was not some bullying incident at an inner city school: it was justice as seen by Borough Justices Joseph Bateson and Edwin Erwin, intended to prevent Horatio from breaking the law again following his theft of a copper tap worth seven shillings from the Urinal Yard at Leeds Station.

Although this is an unusual case, crime at railway stations was nothing new. Major stations in towns and cities saw hundreds of people passing through every day, many carrying luggage, money and items of value to thieves. Travellers would all be subject to distraction by having trains to catch, and by the hectic confusion inherently found at a busy station. Each person was a potential victim of crime, and therefore stations attracted criminals like wasps around a jam-jar. Victims of theft at King’s Cross could be half-way to York before they realised that their pockets had been picked. For thieves, a railway station provided both a victim and a means of making a fast getaway.

Henrietta Shuldham, the 44-year-old daughter of a Commander in the Royal Navy, became a victim of pickpockets at Kings Cross station in 1867. The two perpetrators, Martha Walters and Catherine McIntosh, were both caught and sentenced to two years’ imprisonment with hard labour. These ladies were experienced thieves, McIntosh having been convicted of felony three times previously, and Walters once before.

We know of at least three other crimes committed at King’s Cross station that year. A man named Robert Henry Lawford made off with 150 yards of ‘Winsey’ material valued at £5, for which he received 12 months’ hard labour. And in the March of 1867 George Weston, who worked at King’s Cross station as a porter, was caught stealing 36 pairs of gloves from a box on the platform. He was sentenced at Middlesex Sessions to one year in prison.

My final example shows how efficient and effective old fashioned ‘on-the-beat’ policing could be in the days before electronic and digital assistance. On 16 July a Mrs Cautrell, who was making her way from Windsor to Huntingdon, arrived at King’s Cross station at 15:45 in a cab. She had several items of luggage which were unloaded onto a barrow by Porter Stillwell and taken into the Booking Office. She had a while to wait for her connection, so she took a stroll before checking back on her luggage to find that her carpet bag was missing.

A little after 16:00, two plain clothes policemen noticed a man and a woman walking swiftly down the Caledonian Road carrying a carpet bag, and they followed them into a Marine Store Dealers Shop. They watched the couple try to open the bag, and then moved in to question the pair before taking them both into custody. They were charged the following day at the Clerkenwell Police Court. The male prisoner, William Haywood, stated that he was in the habit of standing about the cab departure gate as a casual porter, earning what he could by carrying bags for people who might employ him. He was discharged, but the female prisoner, Emma Smith, was convicted of stealing Mrs Cautrell’s carpet bag, and the £15-worth of clothing it contained. She was found guilty and sentenced to 12 months’ hard labour. 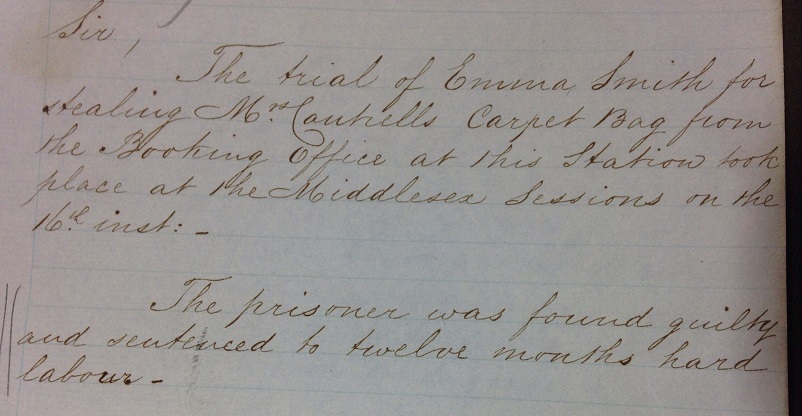 Great Northern Railway Report to Board on the theft of a carpet bag by Emma Smith. RAIL 236/299/11.

All of the information on these crimes came not from a Metropolitan Police report, or a Home Office criminal register (although they could also be traced through these sources), but from a report written for, and submitted to, the Board of the Great Northern Railway. All railway companies at this time would have a Board of Directors, to which numerous committees and individuals would submit reports on all aspects of company business and the working life of the railways. A large number of these reports, from various railway companies, are held here at The National Archives and have, until recently, been given the very general title of ‘Reports to Board.’ But each one is a snapshot of a particular incident, issue or development in the life of that railway. Indeed the early reports record decisions taken, as well as new advances and experiments carried out which can be seen, in retrospect, to have changed the way in which the railways evolved across Britain.

For the past year or so I have been working with a small team of volunteers to catalogue these reports, adding the title of each one to Discovery, our catalogue – thereby making them searchable by keyword and date. So far we have added around 5,000 reports from the Great Northern, the Cambrian, the London Midland and Scottish, and the London and North Western Railway Companies to Discovery, and we aim to add another 7,000 before the end of 2018. This will serve to open up these interesting and valuable documents to researchers worldwide, and help to reveal some of the issues dealt with by the early railway companies as never before.