These are the subjects of documents that you might typically associate with the research of political or trade history at The National Archives. However, as someone researching Art History I’d naively not thought to find myself in such bureaucratic realms, certainly never expecting the records series surrounding these topics to reveal stunning glimpses into the life and times of some of my greatest canonical artistic heroes!

Surprisingly, working and researching at The National Archives has now firmly convinced me that this is indeed the place to come if you have any aspirations to decode and analyse paintings and art work, particularly if your chosen genre has any connection to British history. Key fragments and facts that would have affected artists’ lives, and thus their practice, can be found buried throughout the records here. And, it is more common than you may think to find documentation where the figures themselves are named. Be they medieval exchequer rolls detailing payments for crafts services rendered or 19th century copyright registrations on photographs of artists posing in their studios, British art and its history is splattered like drops of paint throughout the richness of the records.

A prime example of the way in which this valuable primary source material can impact on our understanding of the history of art, tracks the official footsteps of one of the Victorian era’s premier painters. 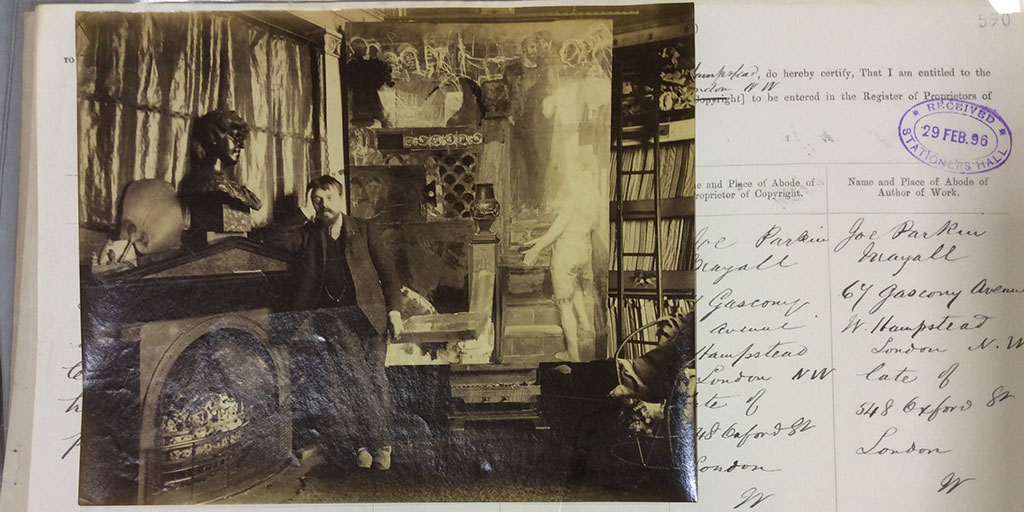 Photograph of L Alma Tadema [Royal Academy], in his studio, leaning his head on his hand against mantel piece. February 29, 1896 (catalogue reference: COPY 1/423/590)

Lawrence Alma Tadema; born 8th January 1836, a Belgian national, he died 25th June 1912, a British denizen (a form of citizenship or naturalisation unused today)  and one of the most eminent, prolific and respected classical painters of the period. In the image above we can see Alma Tadema nonchalantly leaning against the wall of his studio; pausing work on the huge classical antiquity scene propped on the far wall, laying claim to the organised chaos of his studio with typical 19th century self assurance. He is king of all you survey; in this image the creator, the subject and the artist.

The record itself is from the series COPY 1, which holds the original forms of application for the registration of proprietorship at Stationers’ Hall under the Copyright Acts in force from 1842 to 1912. In basic terms, this image of Alma Tadema in his studio was copy written in 1896, while the artist was at the height of his fame in Britain. This simple photograph, and its accompanying italic scrawl of a registration form, gives the modern world a glimpse into the early days of the cult of the celebrity surrounding characters such as this, where every image of the icon is devoured and owned by the public sphere. It makes a statement about this man’s notoriety that in 1896 that a photograph him simply stood in his studio was valuable enough for someone to pay to protect its use!

Now, the spotlight had not always shone so brilliantly on this artist, records at The National Archives show us how he emigrated from Belgium to Britain in 1870 specifically to further his career, and to escape the ravages the Franco-Prussian war were heaping on Northern Europe.

Upon arrival and in previous trips Alma Tadema immersed himself in the British arts scene, swiftly developing connections with the majority of the infamous Pre Raphaelite Brotherhood and ambitiously striving to gain success and validation in his chosen home country. However, true artistic acceptance would illude him until he became a fully admitted member of the Royal Academy. In fact the main reason he used as grounds for his petition to Queen Victoria for permission to remain indefinitely within Britain was:

‘That in the prosecution of his said profession your petitioner is desirous if becoming a member of the Royal Academy in England, and that no foreigners are admitted members of the Academy.’

Alma Tadema obviously had a fan in the Queen as with letters patent she made him a British denizen, one of the last ever created. Meaning while he was not a British citizen in the common sense of the word, he was a sworn loyal subject of the crown of England for the rest of his life and had effectively taken the country as his motherland. The image below shows a section of the actual document that constitutes these letters patent, from the series HO 45. 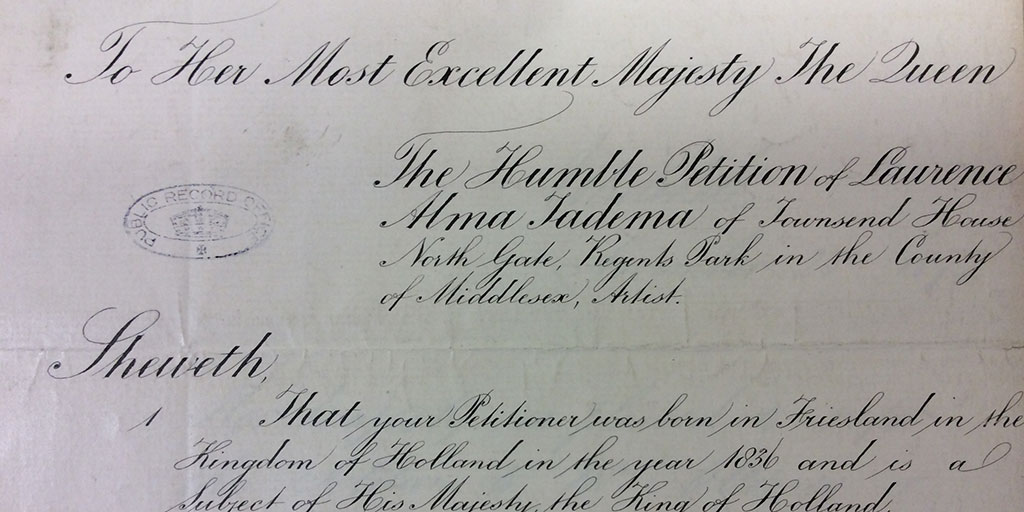 This document was the key to unlocking Alma Tadema’s ambitious dreams and allowed him to reach the heights he then attained in his career. On 19 June 1879 Lawrence Alma Tadema was made a full member of the Royal Academy, achieving one of his most important personal goals.

The records here can also show us glimpses into the relationships between artists and reveal snapshots of life from within their community. In 1897 Alma Tadema’s daughters, Anna and Laurence, applied for naturalisation to become British citizens. Their granted naturalisation papers, the applications and notes from their lawyers can be found in their files here; Anna Alma Tadema in HO 144/403/B22997 and Laurence Alma Tadema in HO 144/403/B22997A.

The wonderful and surprising discovery that was made with these files is that none other than the legendary Edward Burne Jones is one of Anna Alma Tadema’s sponsors. In the image below we can see his signed testimonial supporting her naturalisation application. Burne Jones was a fellow 19th century artist and a proponent of the Pre Raphaelite style of painting and leader of the Aesthetic movement, favouring subject matter from Arthurian and Classical myth – we can see here the reason for Burne Jones’ knowledge of the Alma Tadema family. He is likely to have been a familiar face in the artistic community and shared a passion for antiquity with Alma Tadema himself. 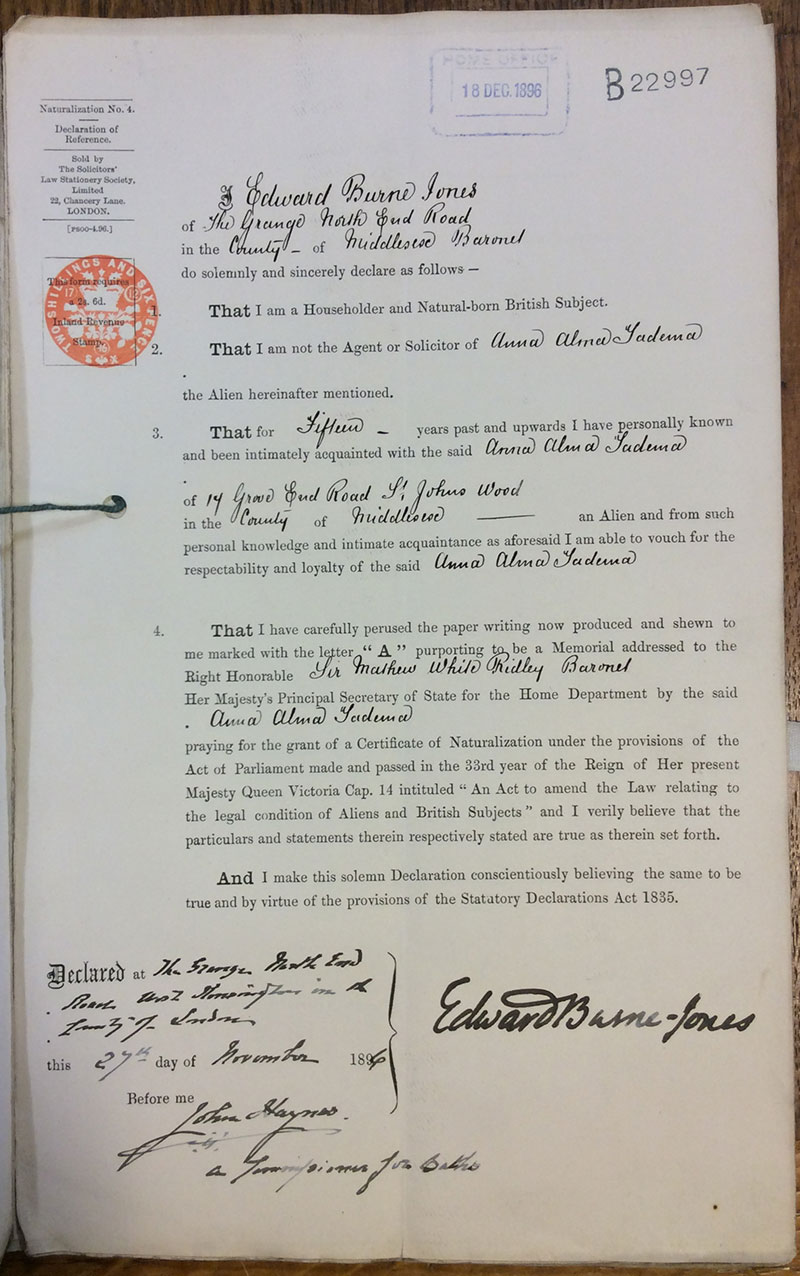 This document shows us how iconic names of the art world interacted and were all members of a human community, not unlike our own in the modern world. For example, how many of you have sponsored a family friend’s passport application?

And finally, possibly one of the most exciting examples of Alma Tadema’s daily existence was found recently in the ever valuable and intriguing COPY 1 series. COPY 1/24 is still being catalogued and will soon appear on Discovery detailed down to an item level. While working on this piece of the series the below registration was found. 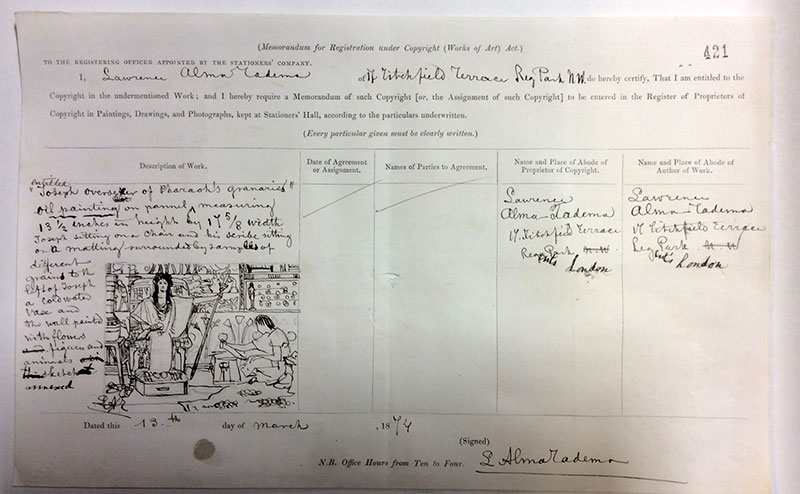 ‘oil painting on panel entitled ‘Joseph overseer of Pharaoh’s granaries’ measuring 13½ inches in height by 17⅝ width. Joseph sitting on a chair and his scribe sitting on a matting surrounded by samples of different grains, to the left of Joseph a cold water vase and the wall painted with flowers, figures and animals.’

This hastily scrawled sample sketch gets down the idea of the painting that the copyright would be protecting. The work when finished still clearly linked to Alma Tadema’s speed sketch.

This registration form is not only a wonderful piece of original art work by the artist but fascinating insight into the practical concerns of a famous painter. In fact, fake copies of Alma Tadema’s work became such a problem for him in his later career that he designed his own strict labelling system, his Opus, the chronology of which he solely controlled. This made it virtually impossible for someone to slip an impostor’s work into this catalogue as it wouldn’t have a numerical tag.

The sheer unadulterated awe and childish glee I take in simply seeing actual documentary evidence of the lives of these monoliths of the artistic canon will never fade. The roughly scrawled signature on an innocuous government form brings these artists, their life and their times into modern understanding. Documents at The National Archives are the primary sources art historians need to make informed analyses of art works, understanding the context of art is the key to its secrets. Documents like those I have highlighted here are just a small example of the kind of records that can provide fascinating insights into art history and its practices, many of them still lie undiscovered in our kilometres of vast repository storage space.

So come and explore the records here and make the very tangible and invaluable connections between The National Archives and the history of art. There are still more artists residing in our records, of all shapes, sizes and times.