The 1966 World Cup and diplomatic games

‘As seen from Italy, the World Cup in England has provided further proof, if proof were needed, that a very good way to damage international relations is to have a really big sporting competition’ 1

These are the words of PS Fairweather, British Embassy, Rome, in a despatch to the Foreign Office (FO) dated 3 August 1966. What prompted this dry and jaundiced comment? It certainly doesn’t fit with the script of the Central Office of Information ‘Goal’ film: ‘for three glorious weeks, Britain played host for one of the most exciting series ever held – the 8th World Cup Series’. 2 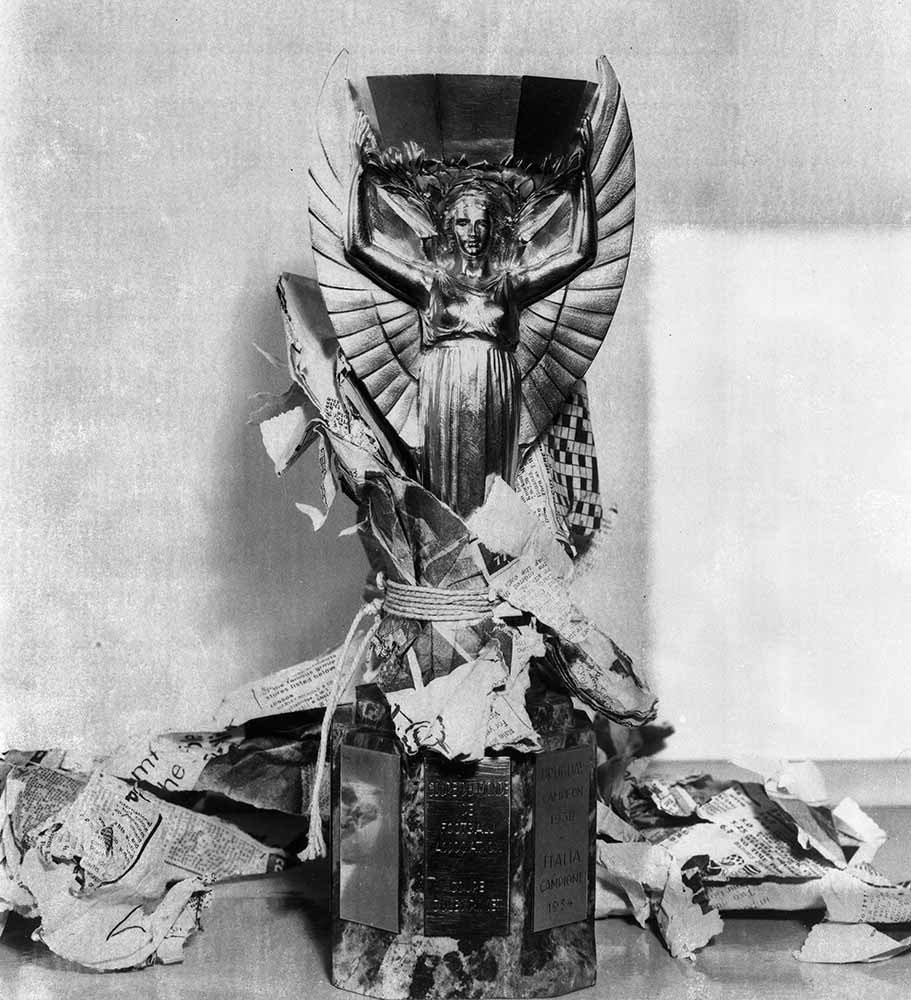 The Jules Rimet Trophy recovered after its theft in March 1966 (catalogue reference: DPP 2/4167)

Diplomatic tensions surrounding the World Cup in 1966 predated the event by several months. When the World Cup (on loan from Brazil) was stolen from an exhibition in central London on 20 March 1966, a spokesman for the Brazilian FA called the loss of the trophy ‘sacrilege’, and stated it would never happen in his country as Brazilians loved football too much (fortunately the World Cup was recovered on 27 March, thanks to a dog called Pickles!) 3

In April, the Brazilian sports personnel were further irritated by restrictions on the numbers of foreign photographers to be given access to World Cup matches: the Brazilian press could only send two photographers, whereas the British Press had 14. In a letter to the FO, Sir Leslie Fry, British Ambassador to Brazil, explained about the latest complaint letter he had received, from the National Federation of Professional Journalists of Brazil – and attached a translation of this. 4 Alberto Dines complained about ‘the grave injustice of these discriminatory and odious regulations’ and stated that if this proposal went ahead ‘there must arise throughout the world a series of reprisals, perhaps inopportune and with unforeseeable consequences’. Leslie Fry commented that the ‘threat of reprisals is ugly, and unfortunately liable to be carried out in this football-mad country’. 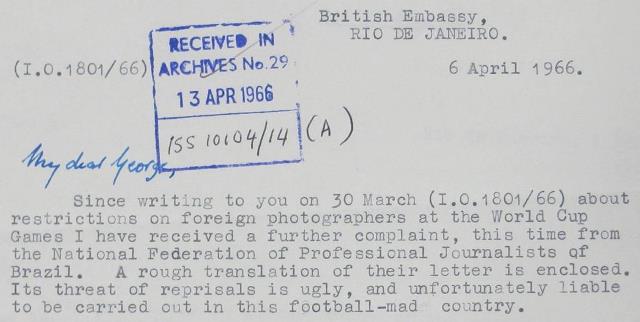 An FO official commented that two photographers was ‘the ration for each overseas participating country’, and argued that ‘the Brazilian complaint of favouritism is a nonsense because all photographs taken must be pooled and made available to the world as a whole’. 5The World Cup Organisation Committee considered the Brazilian complaint but decided that the rules could not altered, and, judging from comments in the file, there was little enthusiasm in the FO for pressing for preferential treatment for Brazil.

Diplomatic officials also argued that more people were planning to attend the World Cup series than ever before, thanks to quicker and cheaper international travel; and the increased demands of television was another factor in restricting number of photographers.

There are several reports of negative reactions to the England team’s performance from Latin America in the Foreign Office files. England’s quarter-final against Argentina on 23 July was a very bad-tempered match – a great deal of fouling went on. The Argentine Captain, Antonio Rattin, was sent off. England triumphed with a header from Geoff Hurst, winning 1-0. Alf Ramsey, the England manager, gave a television interview afterwards and said

‘we have still to produce our best football, and this best is not possible until we meet the right kind of opposition, and that is a team that comes to play football, and not to act as animals.’ 6

This caused tremendous offence to Latin America – there was diplomatic fall-out, as we can see in the files. A diplomat at the British Embassy in Buenos Aires wrote to his Foreign Office Department as follows:

‘The Argentine defeat at the hand of the British [sic] Football team in the semi-finals of the World Football Cup Tournament on July 23 gave rise to a wave of anti-British feeling among football fans, the effect of which was felt throughout the country’ 7

The issue of the Falkland Islands was even brought into the equation. Typically, the British diplomat took a balanced and objective view, acknowledging that ‘it will not upset our normal good relations with the great majority of sensible Argentines, but has left a scar on our popular image’.

When England triumphed over West Germany in the final at Wembley Stadium on 30 July, British diplomats in Latin America reported that the press, particularly in Argentina, were ‘mounting an emotional and irrational campaign against FIFA and the UK’. 8 It was alleged that the UK had interfered in the appointment of referees in order to favour European teams – that an Anglo-German plot had cheated Latin American football. In particular, the complaints focused on the appointment of an English referee for the Germany v Uruguay match and a German for the England v Argentina match. The referees were in fact appointed by an international committee, consisting of one member each from Yugoslavia, Spain, the Soviet Union, Switzerland, Malaysia and Britain.

The negative press extended to Italy, who had been knocked out of the competition (1-0) by North Korea, in a shock result on 19 July. The very disgruntled Italian press then expressed sympathy with the claims of an Anglo-German ‘fix’ as propagated by the Latin American press – this explains the quote from PS Fairweather, British Embassy, Rome, which begins this blog post. 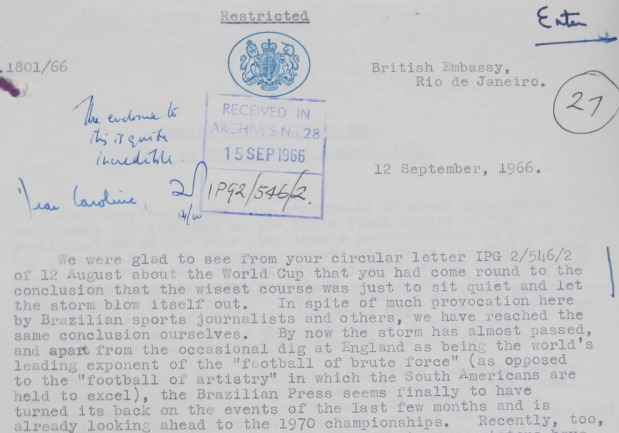 The British Ambassador for Argentina took the view that the best response to all the criticism was to ‘keep quiet and allow the storm to blow itself out’, and this line was adhered to by the FO in general. It appears to have been a wise move; by 12 September 1966, John Shakespeare, of the British Embassy in Rio de Janeiro,  was informing the FO that ‘by now the storm has almost passed’. 9

What comes across from looking at the FO files is the generally calm reaction of the British diplomats to the howls of protest from the Latin American press in the summer of ’66. Sometimes one can detect angry reactions to the most outrageous allegations – and sometimes there are pointed remarks – but generally the views expressed by British diplomats are measured and objective; they are keen not to inflame the situation and express a desire to ‘pour oil on troubled waters’. At the height of the ill-feeling in Argentina on 3 August, for example, the British Embassy at Buenos Aires proposed that we should ‘show appreciation of Argentine achievement in other fields’. 10

The World Cup of 1966 certainly generated a great deal of work for British diplomats.

I haven’t mentioned all the problems associated with the North Korean Football Team – but that’s another story, which is covered on the History of government blog.