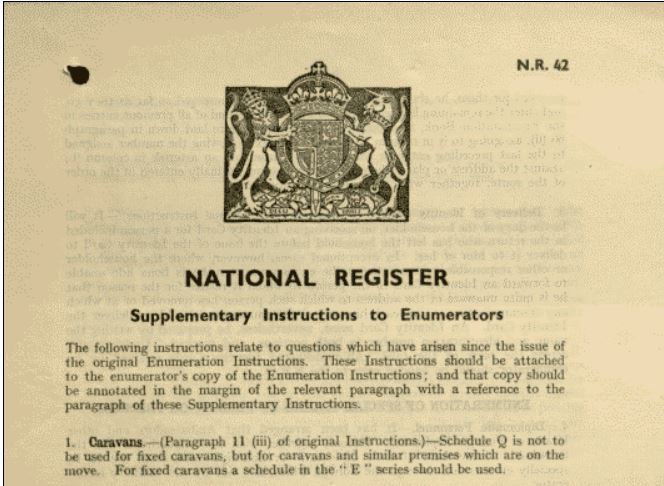 The declaration of war on Germany in September 1939 came as no great surprise. Preparations had been made well in advance at national and local government level, and homes, businesses and institutions had made their own contingency plans.

Troops were mobilised, the blackout enforced, and schoolchildren evacuated from cities. Considering that this was at a time of national emergency, things went remarkably smoothly on the whole. This was no coincidence, because in many cases these plans were based on experience gained during the First World War. This was particularly true in the case of the National Register, the most comprehensive survey ever taken of the British population, carried out on 29 September 1939.

If there had been no war, or a short war, the census would have been taken as planned in 1941. In fact, most of the administrative framework already in place for the 1941 census was used to compile the National Register, which made very good sense. In England and Wales the census was due to be organised as before, by the General Register Office and local registrars, who recruited enumerators to go door to door. The difference this time was that they were recruited two years in advance, so that they could be deployed immediately in the event of war. There was also a second tier of enumerators at the ready, only to be called on if a National Register was taken, and not required for a census in 1941.

These extra men and women were needed because the National Register needed to be taken very quickly and accurately, so the enumeration districts were divided into smaller units that one person could cover over the allotted weekend. So far, the National Register looks a lot like a census, but there are important differences:

‘A census is solely directed to the compilation of statistics… on a given day. It is concerned with any person not as an individual but as a unit … [and] is not concerned with any particular person when he has once been reckoned in his appropriate category. The fact, therefore, that the census returns are very largely incorrect on the day after that upon which they are made does not appreciably invalidate the statistics.’ (catalogue reference RG 28/1)

This is taken from a memorandum written by Sylvanus Percival Vivian of the National Insurance Commission, shortly before the introduction of a National Register – in 1915! This was supposedly a means of more efficiently organising the civilian work force, but as many people suspected at the time, it would also be a very useful recruiting tool for the armed forces. This proved to be the case when conscription was introduced in 1916.

Mr Vivian went on to express his concerns about the flaws in the proposed register, this time on the difficulties of updating it once the initial survey was complete.

‘But in the case of a register of population the [purpose is]… to secure information at any time as to the actual personnel of any given district. Changes, therefore, in the residence and status of individuals… are of vital importance to a register, and any scheme for the organisation of a register must necessarily provide adequate machinery for recording… its actual personnel, which is, of course, in a constant state of flux. Registration differs, therefore, from census-taking in the important respects –

a) That it is concerned with individuals instead of statistics

b) That it must provide information as to the position at any time, instead of a single appointed date.

It is impossible to secure the performance of any new duty by the individual members of the population unless the particular act of fulfilment is closely linked up with the personal self-interest of the individual, or with the action which he would normally take in his own self-interest.’

He pointed out that there seemed to be no mechanism in place that would ensure an accurate register as people moved around, joined the armed forces, or died. This was no doubt based on his own experience working in the comparatively new field of National Insurance; the General Register Office had plenty of experience of census-taking, but keeping a register continually updated was a different business altogether.

A report compiled after the war in 1919, proved him right (catalogue reference RG 28/1). The 1915 register listed all civilian males and females between 15 and 65, excluding prisoners, inmates in asylums or Poor Law institutions, prisoners of war and internees. There was inadequate provision for adding the names of those released from such institutions, arriving from overseas, younger people as they turned 15, or men demobilised from the forces. Nor was there an effective procedure for removing the over-65s, or anyone who had died! In theory, the army and the navy would return a form to the local authority for each man who enlisted, but since they had no ‘self-interest’ in this process, it was a low priority, and the forms were returned slowly, if at all.

An unforeseen problem was the cost of replacing, free of charge, certificates of registration that people had lost. Others were the lack of preparation time allowed, and the overly-complicated system of colour-coded paperwork that ensued. These were largely overcome in 1939 by:

This provided the self-interest element that Vivian had recommended. A charge was also made for replacing lost Identity Cards, along with numerous other bureaucratic refinements that ensured the National Register was kept up to date.

This was done under the supervision of the Registrar General, a post held in 1939 by none other than Sylvanus Percival Vivian!

The 1939 Register for England and Wales, as taken on 29 September 1939, is due to be released online later this year. You can find out more on our partner site Findmypast.co.uk