1618 and ‘The Great Confessional War’ 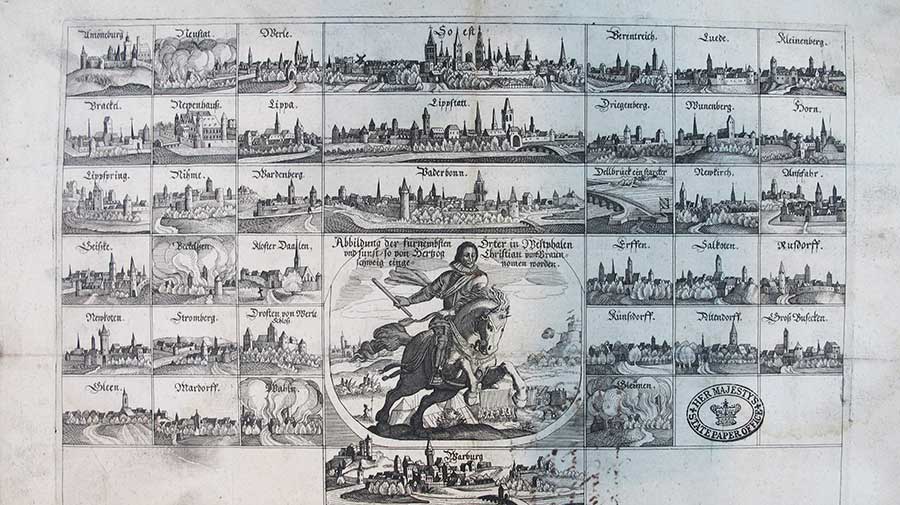 This year marks the 400th anniversary of the outbreak of one of the most desperately bloody struggles in European history.  May 1618 would witness the beginning of what would become known as the ‘Thirty Years War’, in what is now the Czech Republic.

As part of The National Archives’ ongoing Reformation programme, I set out to explore how a domestic revolt in Bohemia led to a continental-wide war by the 1630s, and how it impinged on the Stuart kingdoms. I’ve used archival material from the ‘State Papers Foreign’ series. This was originally gathered by the Stuart Crown’s agents, and dispatched to British envoys – such as Sir Dudley Carleton at The Hague, and Viscount Scudamore in Paris, for example.

The Thirty Years War has been regarded by historians as the first ‘total war’ in terms of complete and absolute destruction.  The conflict devastated whole regions, with famine and disease resulting in a high mortality of the populations of the Central European states.  The war would also bankrupt most of the combatant powers.

The losses were great and varied regionally. The largely Catholic Württemberg (in south-western Germany) lost three-quarters of its population during the war, while in the (north-eastern) territory of Calvinist Brandenburg, the losses amounted to around half.  Much of this destruction of civilian lives and property was caused by the plundering of mercenary soldiers.  Although the sack of Magdeburg by the Imperialists under Marshal Tilly in 1631 1 is considered to be the worst massacre of the war, Swedish armies alone  may have destroyed one third of all German towns.

While the rights of the Bohemian Estates 2 had been confirmed by the ‘Letter of Majesty’ of 1609 3, the ageing Habsburg Emperor Mathias (who had ascended the throne in 1612), began to curtail Bohemian freedoms and close Protestant chapels. He nominated the hard-line, Jesuit-educated Ferdinand of Styria to be his successor.  These actions led to the ‘Defenestration of Prague’ (23 May 1618) when the Imperial regents Slavata and Martinic – having been found guilty of violating Bohemia’s religious guarantees – were famously flung from an upper window of the Hrachy Castle. A minority of the Protestant nobility, led by Count Thurn, rose up under the pretext of defending their liberties. They duly invited the Calvinist Frederick V of the Palatinate to be their ruler, an invitation Frederick very unwisely – and, above all, quite illegally – accepted. 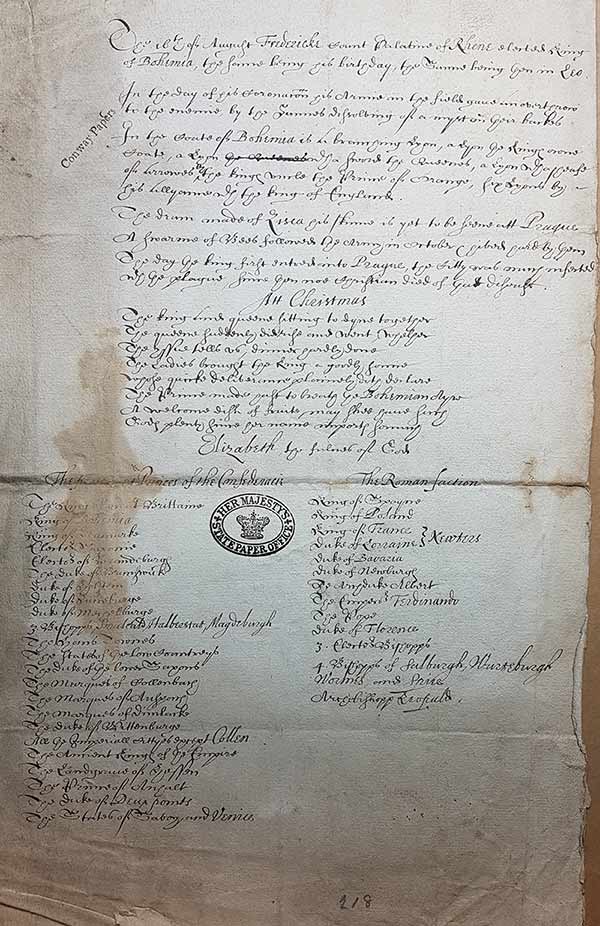 Within 12 months, the already melancholic ‘Winter King’ would be catastrophically defeated at the Battle of the White Mountain, thereby laying open the entire kingdom of Bohemia to the full force of the Counter-Reformation.  Once the path had been cleared, Emperor Ferdinand II was determined to crush the Protestant nobility and bring the Estates back to orthodoxy, transforming the issue of confession into a test of political loyalty.  He made an example of the leading insurgents, with half the unrepentant nobles either executed or dispossessed. 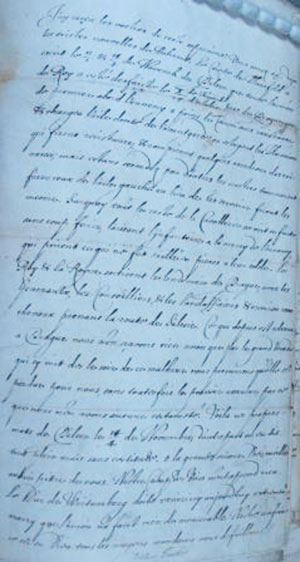 1620. Letter [sent from Holland] reporting on the Habsburg victory over the rebel Bohemian [Estates] army at the Battle of the White Mountain (Catalogue reference SP 84/98, f.88). 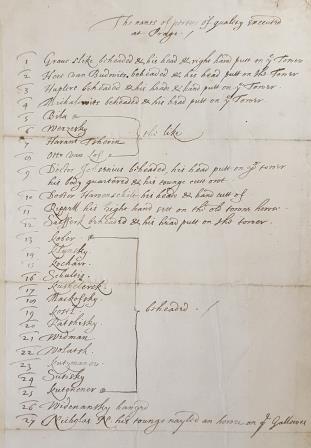 1621. Persons of quality condemned [by the ‘Prague Blood Court’], and the means of their execution in the Old Town Square (catalogue reference SP 80/238).

The Bohemian rebel army was largely commanded by German professionals. In defence of German liberties, the struggle entered its truly European context, with principalities like Brunswick and Anhalt-Bernberg joining the conflict against an over-mighty emperor.  It was against this background that the Protestant electors of the Empire increasingly looked towards the Stuart dynasty, as Europe’s leading Protestant power, for support against the Habsburgs, as the Stuarts had already married into the Danish royal house.

Throughout the 1620s the House of Austria was victorious.  Allied with her close relative Spain, this great power block seemed unstoppable.  The ‘Palatinate cause’ was, at best, only half-heartedly supported by foreign states, although the Dutch United Provinces would consistently support the overall Protestant cause throughout the period.  James I of England was stirred enough to send over a token expeditionary force in 1622 to the Rhineland under Sir Horace Vere, in support of his daughter (the ‘Winter Queen’) Elizabeth, Electress Palatine 4.

A number of leading Civil War commanders such as the Earl of Essex (the later parliamentary Lord General) 5 and Ralph Hopton (the King’s generalissimo in the west) 6 would gain valuable military experience on this German campaign.  Much criticism was levelled at King Charles I for not supporting the Protestant cause enough. 7 Offering the Spanish treasure fleet safe passage through the Channel; the Dutch would be accused of flagrant violation of English neutrality after its destruction at the Battle of the Downs in 1639. 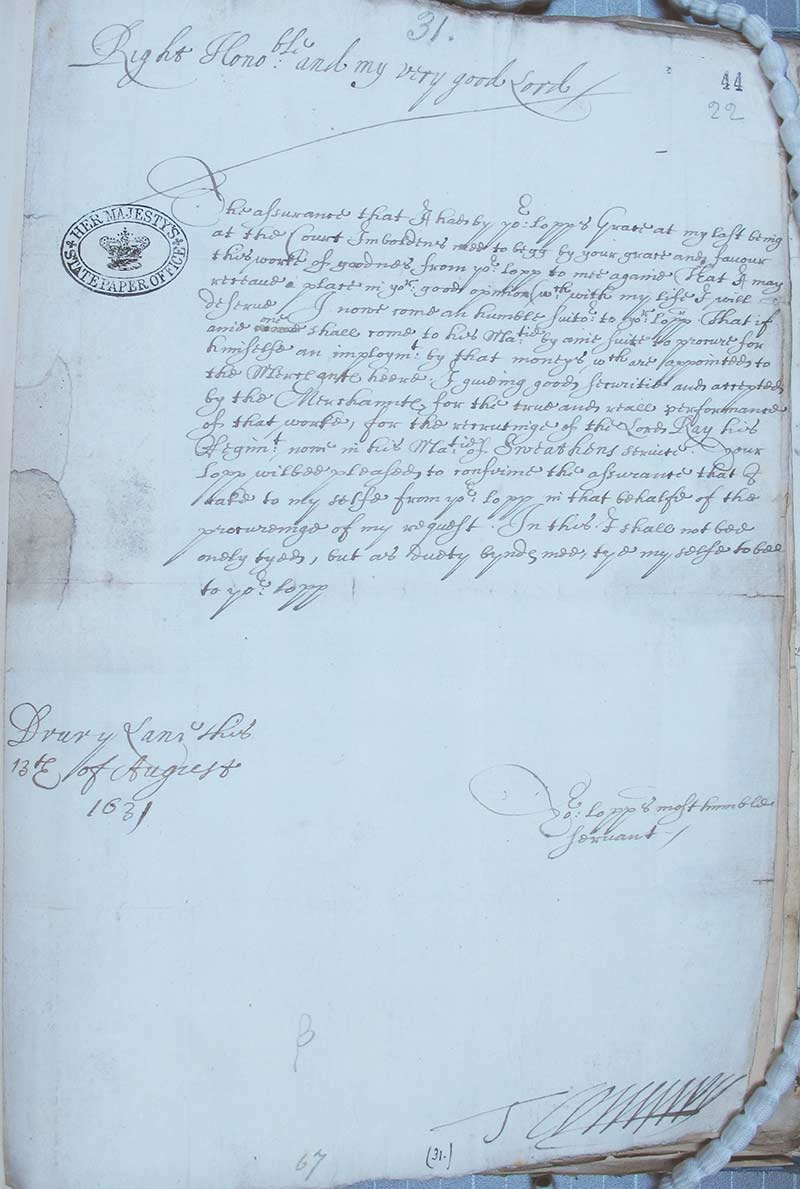 1631. Warrant from Charles I authorising the recruitment for Lord Reay [Donald Mackay’s] Regiment in the service of the King of Sweden (catalogue reference SP 16/198, f.44.) 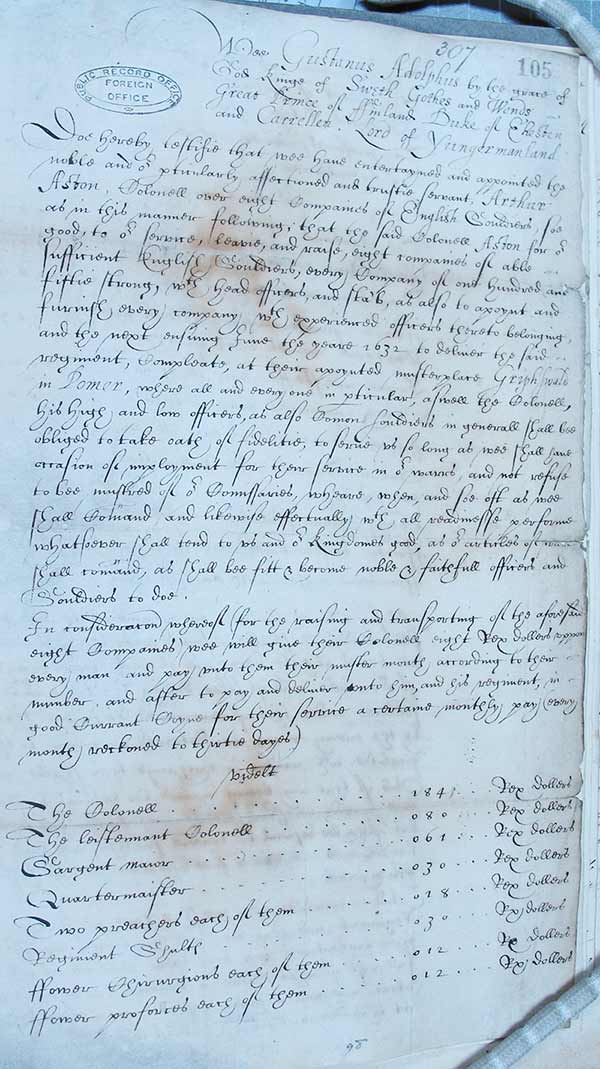 The war rapidly escalated when Gustavus Adolphus, ruler of Lutheran Sweden (to be celebrated as the ‘Lion of the North’), embarked his army on the Baltic shore in 1630. 8Alarmed by the sheer scale of Imperial successes in the north after the collapse of Denmark in the field, which followed her defeat at Lütter in 1626 and the harsh Treaty of Lübeck in 1629, the Swedish king was fearful of a resurgent Poland. 9

Sweden, moreover, as a voracious military contractor, would hire troops of all religious persuasions from across Europe; like the Putney-born Catholic, Arthur Aston, for example, who had fought for the Polish-Lithuanian Commonwealth until the Truce of Altmarck in 1629. 10  Scottish ‘soldiers of fortune’ were particularly sought after; both Alexander Leslie, the later Covenanter general, and Hugh Monro, who would command the Scots troops in Ulster in the 1640s, had both seen military service with the Swedes in northern Europe.  Although the Kingdom of Sweden-Finland was to be ably administered by the regent Axel Oxenstierna after Gustuvas’s death at Lützen,  her defeat at Nördlingen in 1634 would herald the beginning of her century-long decline as a great power. 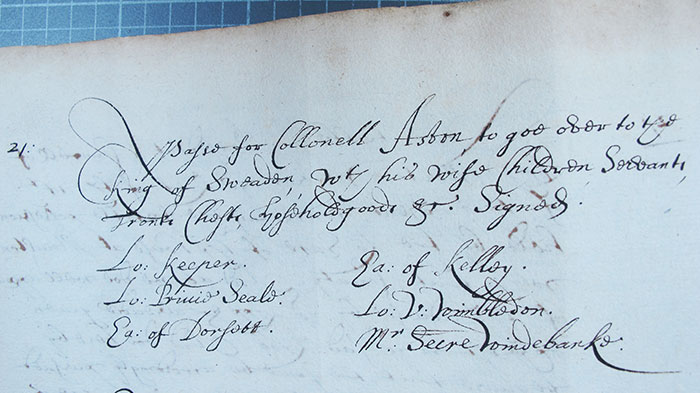 1631. Pass authorised by the Privy Council for Colonel Aston to go over[seas] with his wife and family to raise an English regiment for Swedish service (catalogue reference PC 2/42, f.105). 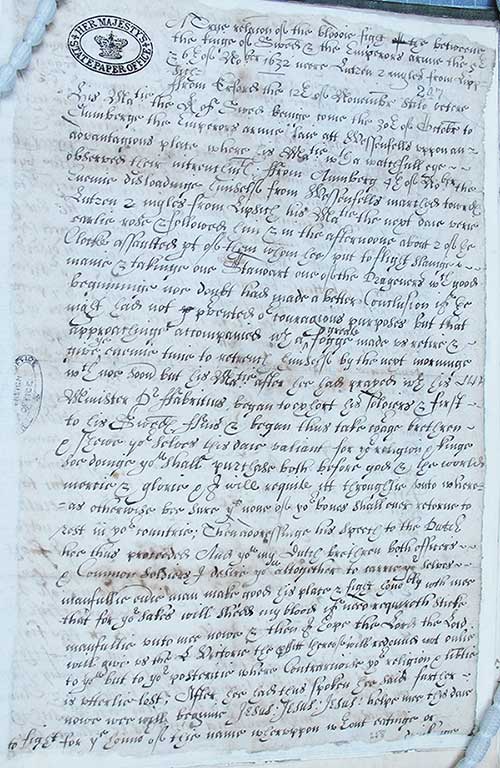 1632. An account from Paris regarding the Battle of Lutzen [Saxony] between the King of Sweden and the Imperial army (Catalogue reference SP 80/8 f.247). 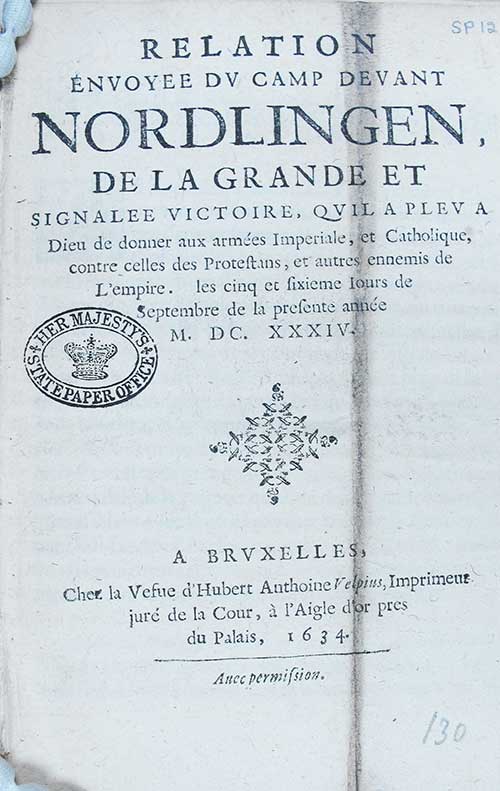 1634. Report (in French) from Brussels [Spanish Netherlands] of the Imperial Catholic army’s victory [under the Cardinal Infante] over the Protestants at Nordlingen [Bavaria] (catalogue reference SP 121/40).

Although Habsburg Spain did initially contribute sizeable forces for the war (Nördlingen had largely been a Spanish victory), it was to be New World silver which kept the armies of her Austrian cousin in the field.  Spain was essentially too occupied with protecting her prosperous southern Netherlands territories from the Dutch, and containing Bourbon France in Italy.  Indeed Spain, as a long-standing contractor of foreign Catholic troops, would recruit both English and Irish volunteers to her ranks.

The Royalist Henry Gage, who came from a prominent Surrey recusant family and would lead the Oxford Horse in the relief of Basing House in 1644, had enlisted as a gentlemen pikeman before becoming captain-commandant of the English regiment (under Sir Edward Parham) in the Spanish Netherlands.  While Owen Roe O’Neil and Thomas Preston, as generals of the Irish Confederate forces during the Wars of the Three Kingdoms, were both veterans of the Army of Flanders. 11 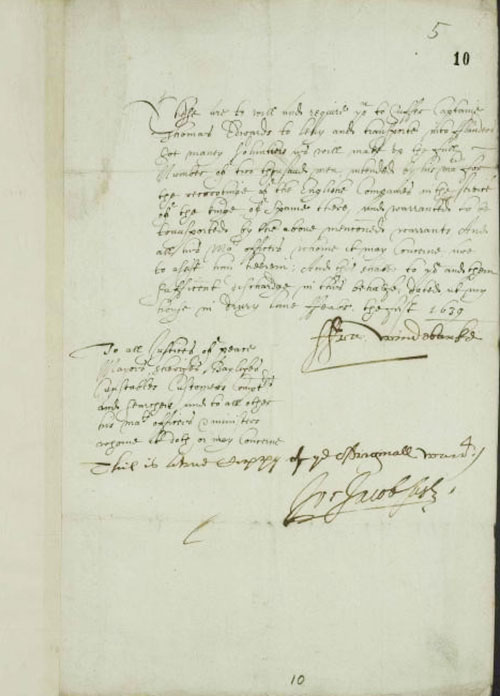 1640. [Secretary of State, Nicholas] Windebank to all J.P’s. Warrant by His Majesty permitting the levying of 2,000 men to be transported to Flanders under Captain Thomas Edwards for the English companies in the service of the King of Spain. (Catalogue reference: SP 16/444, f.10)

While the Holy Roman Empire actually emerged in a stronger position, and was more able to resolve internal tensions as a result of the war, France would gain much from the struggle: foremost Alsace-Lorraine, which denied Spain overland access to her possessions in the Low Countries.  Under her pragmatic first minister, Cardinal Richelieu, she was prepared to sacrifice religious principles, and support the Protestant cause against the confining encirclement of the Habsburg dominions.
By financing Sweden’s armies (like the forces under the independent contract commander Bernard of Saxe-Weimar), Richelieu skillfully managed to split the Habsburg alliance; and by well-placed political and military action, Catholic France would permanently be able to tip the balance of power.  The decisive French victory at Rocroi in 1643 would, furthermore, bring an already decaying Spain to humiliating terms. 12 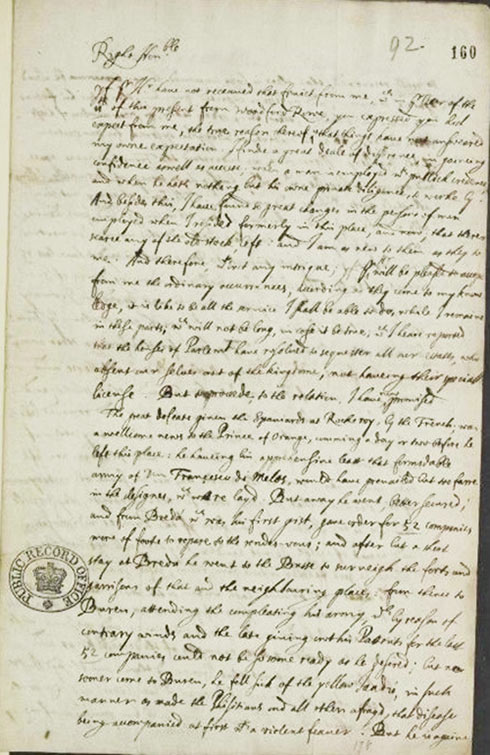 1643. Report from Sir Dudley Carleton on the ‘great defeat given the Spaniards’ at Rocroi by the French [under the Duc d’ Enghien](Catalogue reference SP 16/497, f.160).

Although the conflict had originally been fought over religious issues, the entry of both Sweden and France (from 1635) turned the struggle into a purely secular war. Moreover Denmark, Saxony, and Brandenburg would all join the Imperialist side in the latter 1630s.  Gustavus Adolphus even stated ‘that if it had been a religious struggle, he would have declared war on the Pope, not the Emperor’ 13.

While the military innovations of the Swedish army in tactics and weaponry (which had improved upon the flexible Dutch system), would be increasingly adopted in the war-torn British Isles of the 1640s, the European conflict itself was finally brought to a conclusion with the signing of the Peace of Westphalia in 1648, which gave political equality to Calvinists. 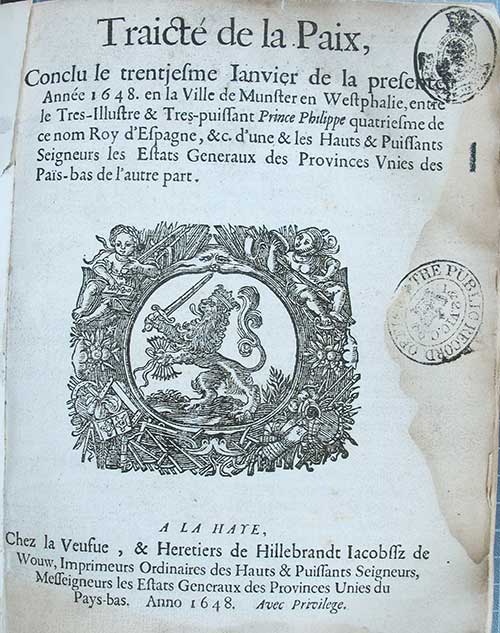 1648. Treaty of Peace made at Munster, Westphalia between Philip IV, King of Spain, and the States General of the Netherlands [ratified in October to end the hostilities between France, Sweden and the Holy Roman Empire] (Catalogue reference SP 113/6, f.1).

Although Bohemia ultimately remained under Habsburg rule, the Electress Elizabeth would see her husband’s heirs returned to a significantly diminished patrimony, with a total population much reduced from what it had been before 1618.