At approximately 04.00, the ship was hit by two torpedoes off Lundy, and rapidly sank, within five to seven minutes. Witness statements made by survivors made it clear that the ship was sunk by an submarine, later identified as the German U Boat UC 56, despite the ship being lit up as a hospital ship (identified by a chain of green lights, in addition to deck and navigation lights) and her location in the ‘free area’ which should have marked her out as immune and an illegitimate target. She immediately lost all power – other boats in the area recorded the sudden blacking out of a previously heavily-illuminated ship, which rendered the already listing ship very difficult to evacuate. She took all but around 29 crew and staff down with her. A handful of survivors were picked up in the area in the aftermath of the sinking, but 144 souls perished with the ship. All eight of the nurses on board went down with the ship, and the sinking represents one of the worst losses of nursing staff at war. It was reported in the British Journal of Nursing on 9 March 1918, clearly a source of much anguish to the profession.

The National Archives holds the service records of all eight of the nurses who went down with the HMHS Glenart Castle in the War Office: Directorate of Army Medical Services and Territorial Force: First World War Nursing Service Records (WO 399) series. This series is central to understanding the practice and movement of nurses during the First World War and captures a huge variety of experience of these extraordinary women. Service histories of women who served in both the Territorial Forces Nursing Service (later the Territorial Army Nursing Service) (hereafter TFNS) and the Queen Alexandra’s Imperial Military Nursing Service (later the Queen Alexandra’s Royal Army Nursing Corps) (hereafter QAIMNS) can be found in these records. If you are interested in finding out more about either of these services, the late Sue Light’s website Scarlet Finders is an excellent resource, and information can also be found about nursing during the First World War and beyond in the extensive collections of the Royal College of Nursing. In addition, the court of enquiry into the sinking of the HMHS Glenart Castle can be found here. 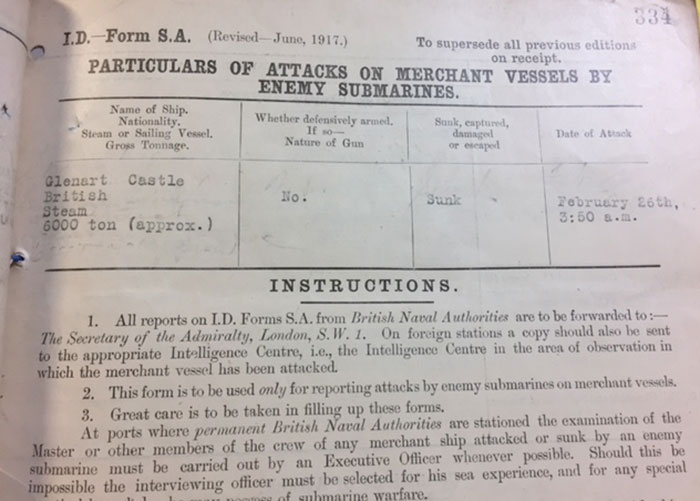 The nursing staff on board the HMHS Glenart Castle that fateful night were as follows:

Matron Katy – sometimes Kate – Beaufoy, born 20 December 1868, a native of Birmingham, was educated at St Clements, Nechells, before undertaking her probationer training at the Royal Devon and Exeter Hospital between 16 October 1893 and 11 January 1898. She then spent 18 months as a sister in the operating theatre, and six months as a sister on the male medical wards. Katy became Matron of the Exeter Sanitorium for Infectious Diseases in January 1900, and from August 1900 served with the Army Nursing Service Reserve in Dover and South Africa. Between 1902 and 1908 she undertook private nursing for Dr G Blacker of Wimpole Street and Dr Parkinson on Sloane Street. She renewed her service with the QAIMNSR again in 1908, and upon the declaration of war, re-joined the QAIMNS on 17 August 1914.

Katy was attached as Acting Matron to 15 General Hospital in Alexandria on 24 May 1915, and was transferred to Ral-el-Tin. She was admitted to 19 General Hospital in Aboukin on 1 October and transferred home on 6 October 1915. She was discharged to duty on 22 January 1916, and took up duty as Acting Matron on the HMHS Dover Castle on 1 June 1916, which took her to Salonica and later Malta. Katy was on sick leave from the beginning of May 1917. By late June 1917, Katy was on leave at home, settling her father’s affairs after his death and awaiting an operation herself. She was then at the QAIMNS Sisters’ Hospital, and latterly Queen Mary’s Hostels for Nurses until her sick leave finished in September 1917. She was then sent to the Royal Victoria Hospital in Netley in October 1917 before embarking as the Matron of the HMHS Glenart Castle on 1 November 1917. Her diaries were recently published. It was reported in the ‘British Journal of Nursing’ that Katy had travelled over 60,000 miles since the beginning of the war, and had some 30,000 patients under her care in that time.

Sister Jane (Jennie) Evans of Brighton, born 11 May 1881, was educated at St Barnabus School in Pimlico, then worked at the Victoria Park Chest Hospital, Bethnal Green, between 1908 and 1910 before undertaking her training at the Leicester Royal Infirmary between 1910 and 1913. She completed her training as a staff nurse. She worked in a nursing home between 1913 and 1914, before undertaking private nursing in 1914 and 1915. At some stage she worked for a few months at the Brighton Isolation Hospital. Jane joined the QAIMNSR on 28 March 1915. Jennie was survived by her sister Martha, and her nephew and nieces.

Staff Nurse Rose E Kendall, born 24 January 1887, of Birmingham, was educated at Somerville School, Small Heath, and undertook her probationer training at the Infirmary in Erdington, completing her training in October 1908. Within three months, she was promoted to Staff Nurse, and then again to Ward Sister in January 1912. She remained at the Infirmary in Erdington until she signed up to the QAIMNS on 16 October 1914. She renewed her contract with the QAIMNS on 25 May 1915 and again on 6 February 1917. Rose transferred from the Wharncliffe War Hospital to HMHS Glenart Castle on 12 November 1917.

Rebecca Rose Beresford, born 18 June 1878, of Sydenham, was educated at the Haberdashers School before undertaking her probationer training at the Taunton and Somerset Hospital in Taunton between 1907 and 1912, by the end of which period she was covering a sister’s holiday duty. Between April 1912 and December 1913 she was employed at the Blackheath RI, before working at the Anglo-American hospital in Rome between February and June 1914. She undertook a midwifery course between July and November 1914, and between January 1915 and March 1917 she was a surgical ward sister in the temporary hospitals in Bavois and Marne. She joined the staff of the War Hospital for Prisoners at Belmont in Surrey on 1 May 1917, on the same day as Edith Blake, who was also on board the HMHS Glenart Castle when it went down. It is clear from her file that she and the aforementioned Blake became good friends as she requested a transfer to the Glenart Castle on 11 February 1918 in order to work with Edith, and duly arrived there on 19 February. Rebecca was a last-minute substitution for Nurse Vida Philips, who should have joined the ship, but was deemed unsuitable. Rose left behind her widowed mother, Hannah, along with her brother Reuben and sister Hannah.

Edith was a native of Sansui [Sydney], in Australia; prior to the First World War she had worked at the Coastal Hospital in Sydney. She approached Dame Becher concerning her transfer to the QAIMNS in April 1917. By then she had already served six months on the HMHS Essequibo and spent eighteen months in Egypt at General Hospitals 17 and 21 during 1915 and 1916. Directed to another international posting in April 1917, she asked to be transferred to a home hospital instead and, as above, she and Rebecca started at the War Hospital for Prisoners at Belmont on the same day. Edith joined HMHS Glenart Castle at Liverpool on 17 November 1917. At a memorial service for Rose and Edith held at Belmont in March 1918, high tribute was paid to their work. The British Journal of Nursing observed that ‘we all know how hard [nursing German prisoners of war] is, and it seems an act of brutal ingratitude that their work for the enemy wounded should be requited with foul murder at the hands of the German navy.’

Elizabeth was born in Glasgow in 1880, and spent her childhood in Wigtown and Durban, South Africa. Her father was an engineer employed in the Bridge Construction Department in Natal, and she undertook her basic training at the Greys Hospital in Natal between 1898 and 1903. Initially a ward sister, she was latterly Charge Nurse in the operating room at Greys for eighteen months. Between 1911 and 1914 she was charge nurse at the Infectious Diseases hospital in Durban, and then moved to the Scarlet Fever hospital in Clydebank between 1914 and 1916. She enrolled with the QAIMNS in July 1916, and was initially posted to the South African Military Hospital in Richmond Park.

Charlotte was born in Leyton, Essex, in 1877, and was one of nine siblings (seven girls, two boys). Two of her sisters (Gertrude and Harriet) also served as nurses during the First World War. Charlotte trained in Plymouth at the South Devon and East Cornwall Hospital from 1897. She completed her time in Plymouth on a temporary promotion to Sister. She undertook private nursing between 1905 and 1908, and was subsequently Matron at the Bromsgrove, Droitwich and Redditch Isolation Hospital. Between October 1914 and July 1915, she served in Serbia, employed as a matron at a typhus hospital. Charlotte enrolled with the QAIMNS in August 1916, subsequently serving at the Royal Victoria Military Hospital in Netley, and latterly at the Empire Hospital in Vincent Square. In 1917 Charlotte, along with her four unmarried sisters, changed her name by deed poll from Heinrich to Henry. Her sister Gertrude, in particular, had been subjected to a good deal of anti-German sentiment during her nursing career, which seems to have prompted the women to anglicise their surname.

Staff Nurse Mary Mackinnon, a native of Arisaig, Inverness-shire, was called up for duty at the second Southern General Hospital in Bristol on 9 October 1916. She renewed her contract with the TFNS on 16 January 1918, and was initially destined for the HMHS Dunluce Castle before her instructions were rescinded at the last minute. She was then transferred to the HMHS Glenart Castle on 15 February, destined for Salonika.  Mary was survived by her parents, John and Flora and her seven brothers and sisters.

These files represent just a snapshot of these women’s lives, but go some way to representing the broad range of skills, talent and experience that these women brought, from across the world, to nursing sick and wounded men during the First World War. On 26 February 2002 a memorial to those lost was dedicated at Hartland Point, Devon.

This week we’ll be taking part in the Imperial War Museum’s #WomensWork100 Twitter Q&A, on Tuesday 27 February – do send us your questions.