100 years since the Battle of Mons

‘The morning of Sunday the 23rd broke in mist and rain, which about 10 a.m. cleared off and gave place to fair weather. Church bells rang, and inhabitants of the villages near the canal were seen in their best attire going to worship as if war was utterly distant from them’.  1

And so opens the account of the Battle of Mons, on 23 August 1914 from the Official History of the War, the first time the British and German armies clashed in Europe during the First World War.

The German First Army was advancing on Mons, a town just inside the Belgian border from France. The British Expeditionary Force (BEF) was split into two corps.  II Corps, mostly consisting of the 3rd and 5th Divisions, were positioned along the Mons-Conde Canal, running due west from Obourg, past Mons and on towards Conde. The I Corps came to take up a position on the right of Mons, running in a more southerly direction towards the River Sambre and the French Fifth Army.  2

Using the draft chapters, narratives and correspondence used to form the Official Histories from CAB 44 and CAB 45, researchers can piece together the experiences and subsequent movements of the BEF before, during and after the Mons fighting. Some of the evidence compiled from individuals, including officers, reveal some fairly frank views, including resentment of what happened during and after Mons, raising concerns about the readiness of the BEF to face the advancing German troops.

In CAB 45/129, for example we find an account by British officers subsequently held prisoner at the Torgau-Am-Elbe prisoner of war camp, which includes the following statement about conditions at Mons:

‘Two notable impressions were made on the minds of, at any rate, Regimental Officers; the first was their entire lack of information of the enemy, and the second their absolute ignorance of the British dispositions. Those belonging to one Brigade did not even know in most cases where the next Brigade was. In short, no one appeared to know anything.’ (CAB 45/129)

The unit war diary of the 1st Battalion, Royal West Kent Regiment, positioned at St. Ghislain to the west of Mons also hints at a lack of clear information. It records for 22 August that it was information received ‘from natives that German patrols had been seen in the neighbourhood of Tertre’, just to the north of St. Ghislain, rather than confirmed reports from Brigade or Division Headquarters (WO 95/1553/1). As Lyn Macdonald has outlined, however, this was the first time many of the British Expeditionary Force had fired their weapons in anger ‘despite their years of hard professional training’.  3 It was perhaps inevitable therefore, that problems would be encountered when the initial fighting took place.

With the majority of the British forces defending positions along the canal, the protection of the canal crossings became a focal point to the day’s fighting. The unit war diaries from WO 95, available to view online, provide researchers with additional information about the experiences of these British units fighting along the canal.

For the 4th Battalion, Royal Fusiliers, the entries for 23 August confirm that a numerically superior German force of four infantry battalions with supporting cavalry and artillery were attacking their position at Nimy, just north of Mons, with severe casualties suffered defending the canal bridge (WO 95/1431/1). Further to the west, the units of the 13th Infantry Brigade were also defending against superior German numbers, including artillery. The Brigade Headquarters war diary details that the enemy moved 18 field guns to within 1200 yards of the canal at St. Ghislain, which ‘soon silenced our one battery. The lack of any adequate artillery assistance on our side was very seriously felt’ (WO 95/1548/1).

Despite the BEF being forced onto the retreat at Mons, the fighting slowed the German advance and highlighted both the discipline and gallantry of the British troops. Writing in 1916, Walter Bloem, a Captain in the Brandenburg Grenadiers who were attacking the 1st Battalion, Royal West Kent Regiment at St Ghislain, claimed that his German troops ‘were opposed only by machine guns, but they were numerous, fired brilliantly, and were so well placed as to defy detection’ (CAB 45/129).  In fact, the West Kents relied mostly upon disciplined rifle fire of 15 rounds per minute, returning us to Macdonald’s reference to many years of pre-war professional training.

Lieutenant Maurice James Dease and Private Sidney Frank Godley of the 4th Royal Fusiliers are recorded in their unit’s war diary as having ‘displayed the most conspicuous gallantry’ in maintaining their machine gun fire, despite the rest of their machine gun detachment having been killed or wounded (WO 95/1431/1).  Lieutenant Dease died of his wounds but he and Private Godley were subsequently awarded the Victoria Cross for their gallantry, the citations of which can be seen online via our Victoria Cross registers (WO 95/1431/1, WO 98/8/102: Victoria Cross register entry for Lieutenant Dease, WO 98/8/110: Victoria Cross register entry for Private Godley). Also recorded in these registers are the VC citations for Captain Theodore Wright and Lance Corporal Charles Alfred Jarvis, both Royal Engineers, and Corporal Charles Edward Garforth, 15th Hussars, who were also awarded VC’s for acts of gallantry at Mons. (WO 98/8)

The service record of Lieutenant Dease can be found within our WO 339 collection and heartbreakingly contains three telegrams sent to Maurice’s father from the War Office, dated 22, 26 and 30 September. The first states that his son had been ‘dangerously wounded’, the second ‘reported killed in action’ and then the third ‘wounded and missing’ (WO 339/7579). 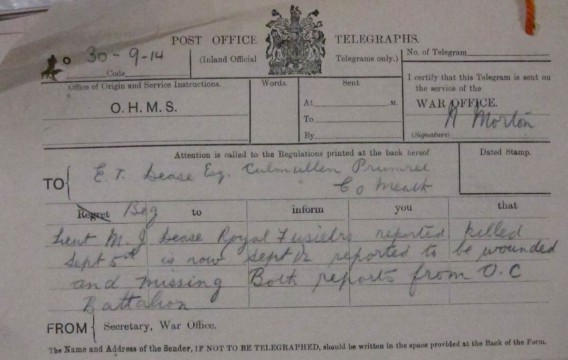 Thanks to three years of work by volunteers and staff at The National Archives, the data from nearly 140,000 surviving paper records within the WO 339 collection can now be searched by full name, rank and regiment. This extensive cataloguing project will now make it even easier for people to uncover the stories of Officers who served in the war. Find out more about volunteering at The National Archives.

This blog does not have the scope to analyse the significance of the fighting at Mons or to cover the actions of the many battalions and units involved, but there are plenty of published accounts that can be called upon to help with that. By highlighting just a few records accessible via The National Archives, we can begin to see just a few of the many, many themes which will be explored again and again during the centenary.

The Official History notes the social and local impact of the fighting at Mons, with local civilians seeing their normal way of life dramatically changed. As the war of movement became entrenched, some villages and towns would remain drastically transformed for many years. There is evidence of communication problems, not just for the military units in the field but also the challenge for the military authorities of accurately and efficiently notifying the families at home of the loss or known status of their loved ones. The increasing importance of artillery firepower is evident at Mons, an aspect of war which would develop enormously during the rest of the conflict, but also the difficulty for the attacking infantry overcoming disciplined rifle and machine gun fire. And we also see, when analysing the personal experiences of those fighting at Mons, the beginning of what would prove to be the countless acts of courage and bravery of troops of all ranks across all theatres of war.