I have been based at the Wiltshire and Swindon History Centre for the past eight months for my National Archives Transforming Archives Traineeship. My traineeship has been focused on developing a community archive for the historic village of Lacock as part of a much wider Heritage Lottery Funded project called Lacock Unlocked. I have been collecting fascinating photographs, recording incredible memories of local residents and discovering the hidden treasures within the village. 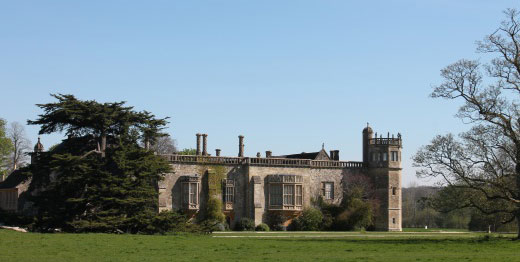 What are community archives?

Community archives are becoming an ever more prominent feature of the archive field. They are a collection of materials that tell the story of a local community, organisation or group. These can include documents, images, diaries, etc. which form a vital part of the community’s memories. They also provide an alternative method to the traditional archive system and provide a format for local memories to be recorded by the communities themselves – essentially a living archive! I have been collecting items like this for Lacock and the surrounding area by holding various events and the response from the community has been outstanding. Below are a few examples of what we have been able to discover.

The photograph to the left is of Mr & Mrs Joseph Chamberlain of Lacock, who celebrated their Diamond Wedding Anniversary in 1921. According to the article they had 14 children, ten of whom were still living and 41 grandchildren and one great grandson. Mr Chamberlain was a carter and was employed for 23 years in that capacity at the George Inn. It is perhaps fitting, due to the recent election, that ‘Mrs Chamberlain was taken in her wheelchair to vote at the last election. Their was never a better argument in favour of women’s suffrage than her domestic history. It is the mothers who bring England up, and they know better than the men what is wanted from Parliament.’ This is perhaps a poignant reminder of the importance of voting which many people take for granted today.

The information concerning this newspaper article was provided by Keith Homewood, whose wife was a descendant of Mr and Mrs Chamberlain.

I held a local event in March which was a wonderful opportunity to engage with local residents and discover what they knew about the village which led to the discovery of some unexpected gems. For instance Peter Williams, a local resident, arrived at the event with photographic film of Harold White’s collection and more importantly a list of names of the local residents in each photograph. Harold White was a photographer who created a collection of propaganda photographs depicting idyllic English village life in Lacock in 1944. Various residents of the time were included in these photographs from the blacksmith to the owner of Lacock Abbey. Visitors to the event were able to provide even more information about those in the photographs, their nicknames and professions to create a clearer picture of Lacock in the Second World War. 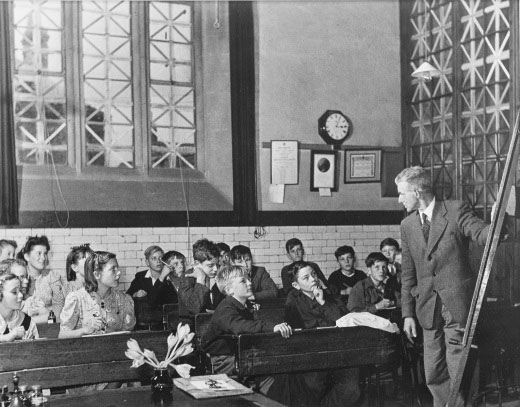 For instance, the Headteacher at Lacock School was called Harry ‘Gaffer’ Hill and is shown teaching at the school. Another showed Sheila Sprules, Bill Minty known as ‘Squeaker’ and next to him Archie ‘Ticker’ Doel all attempting to lift a calf into a cart. The enthusiasm and depth of knowledge displayed by residents was astounding and we plan to capture and share all this information on the Lacock Community Archive website.

Oral history provides another alternative method of recording information, especially to provide an insight into the ‘everyday’ life of a person. History often focuses on important events and figures and ignores the large majority of people. This does not mean that their stories are not interesting, in fact completely the opposite can be true. I have discovered stories about evacuees and the Homeguard in Lacock, American soldiers hiding from the Military Police in the basement of a pub, and various anecdotes about growing up in Lacock. The interviews have ranged from those who have lived in the village their entire lives, business owners, teenagers, and residents who can trace their family history in Lacock back to 1650 and beyond.

These would be unknown and lost to history if not for these interviews, and shows why oral history is so important. I have been fortunate enough to have a team of wonderful volunteers assisting me on the project who have been trained to interview residents, transcribe these interviews or assist with the development of the Community Archive website.

My traineeship has provided me with a fantastic experience and a gateway into the archive profession. I have managed and trained volunteers, organised and advertised events, interviewed residents, developed a website, received general archival training amid much more. I will be studying for a Master’s in Archives and Records Management and believe that the experience, skills and friendships developed on my traineeship have provided me with the perfect foundation for my future studies.

If you want to find out more about my project then you can read my blogs.