Now that I am half way through my traineeship I can tell you that it has completely exceeded my expectations. I have not only gained experience in the archives but also the library and the many outreach projects the archive is a part of. My traineeship has helped me evolve immensely in short timeframe and gain experiences within different fields. 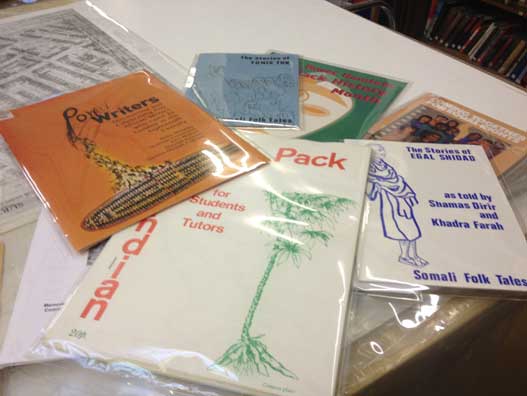 A few Somali stories, poems and booklets in the archive collections

The main project I am working on is an oral history project based on collecting the stories of ethnic minority women living in the area. The concept of the project is based on the ‘journey’ of these women from their native countries and their settlement in Tower Hamlets. All the oral histories, along with the other materials collected, will be turned into an exhibition in March 2014 and then deposited into the archives for future generations. This is the main purpose of my traineeship, to fill the gaps within the archives, which are the ethnic minority groups and women in particular. For example, the Somali community is the second largest ethnic minority group in Tower Hamlets, yet the archive collections have not been able to represent this. Although the gap still remains large, the skills for the future traineeships have made it possible to start filling this void.

As last month was October, I would like to talk about the celebration of Black History Month in Tower Hamlets. Tower Hamlets Local History Library and Archive are always trying to introduce the Archives and its services to the younger population through various events, and Black History Month was a great example of this, as our celebrations were kick-started with a relaxing evening of warm laughter and poetry. The ‘Young Black Poets’ evening was a wonderful surprise as we had not anticipated such a large audience made up of different ages.

It was heartwarming to know that the young people of Tower Hamlets could comfortably express themselves about real life issues that they faced. Listening to just a few poems, they talked about a variety of issues, from juggling their identities to how they feel about current affairs,  giving me insight into just how important their culture was to these young people. To hear how a 15 year old would like to have been a shepherd so that she could feel close to her grandparents and live a care-free life in her native Somalia, with such power and understanding, gave me a sense of pride in growing up in an area that nourished such brilliant amateur poets and in working for the local history library that was allowing them to express themselves.

As the evening progressed it was clear that it was no longer just an event for the ‘young’ but also the ‘young at heart’ as the older poets took over the mic and had the whole room in fits of laughter. Bizarrely, even though I had no understanding of the Somali language, I had no trouble laughing along with the audience as the ambience in the room was just so relaxing and welcoming and the expressions on the poet’s faces were so funny. Although, now that I think about it, I probably did look like a mad hatter so they may have all been laughing at me!