You may not have noticed, as you pass through the reception area here at The National Archives, that we actually have two war memorials on site. One is, admittedly, a photograph of the original Public Record Office (PRO) memorial which still graces the walls of our former Chancery Lane premises. The other is the original memorial, brought here when the staff of His Majesty’s Stationery Office (HMSO), as it was known at the time, transferred. These memorials were erected by colleagues of the men who had died during and just after the First World War, and list the names of around fifty men.

Over the years, and particularly in recent months, staff here have been working to research the men listed, and we have been largely successful. We’ve identified all but a handful of the men and have gathered this information together in a list which you can download. This list is a summary of what we have been able to discover so far about the names on our two war memorials. Each man’s entry indicates whether he worked for the PRO or HMSO.

Help us find their descendents

Now that Remembrance Day is approaching, we’d like to track down descendants of these men, or others with a connection to them, and invite them to The National Archives at Kew on 11 November. Please do get in touch with us if you know about these men and would like to attend the event, either by email at firstworldwar100@nationalarchives.gov.uk or in the comments below. We will be observing the two minute silence at 11.00, and following this there will be a document display relating to some of the men listed on the memorials. I (Audrey) will also be speaking later in the afternoon on the civil service and the First World War. Equally, if you know anything about these men but are unable to come to Kew, please do get in touch as we’d love to hear more about them!

Our research has shown that there is a huge variety of experience and activity amongst our Tommies. There are recipients of the Military Medal and the Military Cross amongst them, men who served almost the entire duration of the war but who were killed in the final days, men who died as a result of injuries at home after the war, but whose colleagues clearly felt ought to be remembered in this way. There are clerks and porters and bookbinders and everything in between, family men and young men, barely out of boyhood. There are men who served in rank from private to company sergeant major, men from London and Edinburgh and Dublin and Manchester. We want to know about them all.

Yesterday marked the 100 year anniversary of the first death commemorated on our war memorials, that of Pte. Charles William Law, who served in the 1st Battalion of the Bedfordshire Regiment. Born in London in 1884, Charles can be found in the 1911 census, listing himself as the hall attendant at the Church of England Soldiers & Sailors Institute on Wellington Street, Woolwich. He married just three weeks later in Enfield, and he and his wife Florence Emily (neé Barber) had a son in May 1913, who was named after his father. Charles and Florence give an address in Drake Street, Enfield for a number of years, though other sources suggest he had a connection to Watford. Charles’ service record has not survived, though we know from his medal roll index card that he was awarded the 1914 Star, Clasp and the Victory and British War Medals. 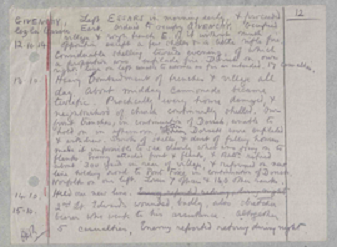 Unit war diary for the Bedfordshire Regiment, catalogue reference WO 95/1570/1

Charles was killed in action along with seven officers and 139 other ranks. The Bedfordshires had been occupying Givenchy for most of the previous two days and the unit war diary shows that there was heavy bombardment throughout the day. The returning officer observed that ‘practically every house in the village was damaged’ and that the area ‘surrounding the church was continually shelled. The smoke of the shells and dust from falling houses made it impossible to see clearly what was going on in the flanks.’ It is clear that it was a tough day for the Bedfords and for the Norfolk and Dorset Regiments who were near the village. Charles is commemorated at the Le Touret Memorial, as well as here at Kew.

This information comes from the Commonwealth War Graves Commission and individual service records (where they survive). This has been supplemented with details from a number of other sources including:

Where no information at all is shown we have been unable to identify an individual with certainty.

We really hope to meet people with a connection to these men on November 11, to join in our commemorations.