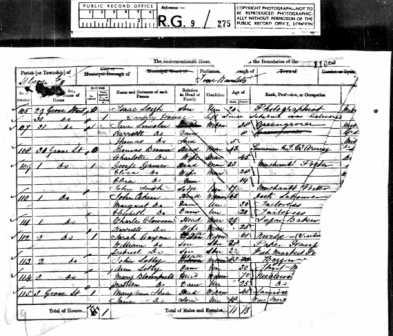 You might think that because all the censuses for England and Wales (and the Channel Islands, the Isle of Man) have been digitised, indexed and put online, there is nothing more that needs to be done to catalogue them. Think again.

Once upon a time, you had to search the census by place, using the microfilm version. If your memory goes back far enough (mine doesn’t) you might even have looked at the paper originals. Either way, you would use the paper catalogue and finding aids to find the piece reference for your parish or place. If it was a large town, and you had a street address to search for, there might even be a street index. When the old Public Record Office catalogue was first put online as PROCAT in 2000, you could look up a place name and go straight to its piece reference(s), although you would still have some searching to do on the film. The real benefit of an online catalogue, though, is that you can do more than one kind of search. For example, there are some parts of every census that are known to be missing, so you could now search for the words ‘missing’ or ‘wanting’, restricting your search to the reference for a particular year, and get an instant list. PROCAT was re-named the Catalogue in 2004, and is now part of Discovery, but the underlying data is the same.

On websites such as Ancestry.co.uk and Findmypast.co.uk, you can now search by name, by place and sometimes by street too. This makes a lot of census searching much easier, but our catalogue descriptions in Discovery are still vitally important. 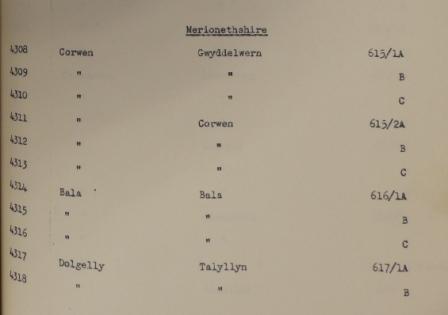 In the old ‘Class Lists’ (now called series lists) all the places in a census appeared in reference order, and you can still view them this way by browsing in Discovery. This is still useful because the 1841 to 1891 censuses are arranged differently on Ancestry.co.uk, our official partner for those census years; on their site you can browse by civil parishes within counties, but the census is based on registration districts, which do not fit neatly into this structure.

If you browse by place in some census years Canterbury, for example, appears to have only two or three enumeration districts, but the rest are not missing, they are listed under individual parish names such as Westgate Without, St Mary Moses and so on. This is fine if you are familiar with Canterbury and its parishes, but can be very confusing if you are not. On the other hand, if you search for Canterbury in Discovery, restricting your search to a census series, HO 107, RG 9 etc, you will find all of the Canterbury parishes together (useful Discovery tip: you can re-sort your results into reference order using the drop-down menu at the top of the results page). The same applies to many other towns. You will also find smaller places such as townships and hamlets listed in Discovery that are not always included in the lists of parishes, so all the old cataloguing information is still very useful.

The series lists, whether on paper or online, were not the only means of finding people and places in the census before it was placed online. There were various other supplementary finding aids, and the most heavily-used of these used to be the street indexes, which were compiled for towns with populations of 40,000 or more. Hard copies of these are still available in our reading rooms, and those for 1841, 1851, 1861, 1871 and 1891 were placed online as part of the Historical Streets Project, now part of the UK Government Web Archive.

Other finding aids included copies of the printed Population Tables from the census reports, containing hand annotations about missing parishes and districts, the availability of street or name indexes and other information. Although some of this information was added to the paper series lists, the staff reference copies always contained more detail, as in the example below, which covers roughly the same area as the public version above.

There have always been more problems with the 1861 census than any other year, because the original books were kept in unsuitable conditions for a time before they came into the custody of the old Public Record Office, and sustained some damage, especially to the covers and outer pages. Some people have suggested that as much as 15% of this census is missing, but there is no evidence to support this, the real figure is likely to be about 3-5%, which is quite bad enough.

'Much Missing and very mixed up': staff reference copy of the Population Tables for the 1861 census (RG 9)

When the old paper lists were first compiled, no-one could have foreseen the introduction of online catalogues. The way that information was presented made perfect sense in paper format, but was not always ideal for transferring directly to an online database. Our Cataloguing team has been working very hard behind the scenes to improve the information underlying first PROCAT, the Catalogue, and now Discovery. One of their recent projects has been to streamline and improve the various record series containing the census. One of the very welcome results of this is that piece level descriptions are no longer infested with the dreaded ‘Description available at other catalogue level’.

This is a very welcome improvement, but even better than that, some valuable new information has been added for the 1861 census. Although details of missing parishes and districts have been catalogued for a long time, details of odd missing pages have not. Over the years we have gathered information about them, and maintained an increasingly large database to which only staff had access. Now this has been uploaded to Discovery, so that you can check for yourself if pages are known to be missing from a part of the 1861 census you are interested in. This information is not comprehensive, but coverage is good for London and south east England, with partial information for several other counties. As information comes to light for other parts of the country, often as a result of reader enquiries, we shall add that too. We have details about missing pages in other census years too, which we hope to add to Discovery in due course.

Over the years some unidentified pages and fragments of the census have been restored to their rightful places, the result of clever detective work by staff or readers. Some poor pages are still ‘orphaned’ but I have worked out where some of them came from, so they can soon be restored too. But that’s another story.