Set cookie preferences
Home > Blog > Lost cities and found documents: do we ever discover in archives?

Lost cities and found documents: do we ever discover in archives?

I like a good lost city. Found cities are interesting (Troy, for example) but lost ones are even better. Here’s a picture (possibly) of one, taken by the cross dressing acrobat and photographer Lulu Farini, protégé of the Great Farini.

The two were crossing the Kalahari desert in 1885 when they came across piles of rocks which Farini declared were ‘either a city or a place of worship, or the burial ground of a great nation’. Today the site is entirely lost – assuming that Farini, a showman as his name suggests, didn’t simply make the whole thing up. What makes a lost city lost? We need to be half aware of its existence but tantalisingly vague about its precise location and nature. 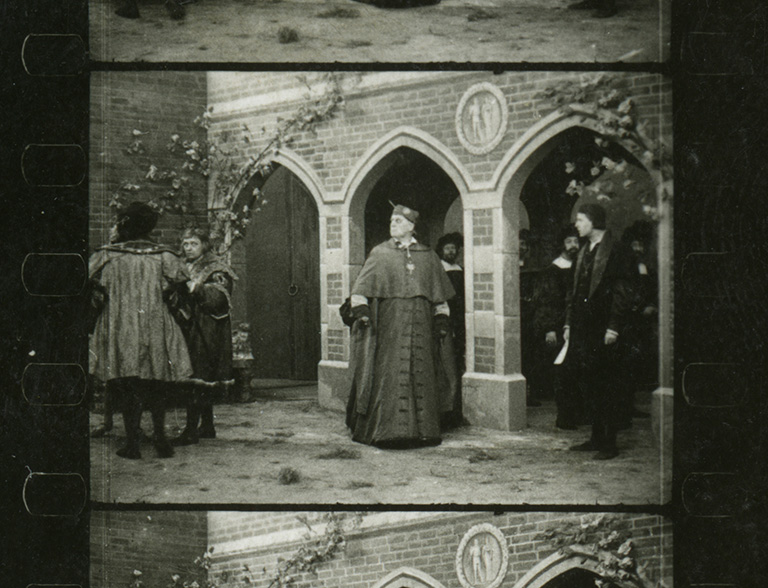 Here’s another loss. A frame from the eight held at The National Archives from the 1910 film version of Shakespeare’s Henry VIII, directed by William Barker. It’s estimated that 80% of silent films made in Britain have been destroyed. But this film is generally regarded as being more destroyed than most because Barker announced that in order to maintain the quality of the prints (which wear out through use) the film would be available strictly for six weeks, whereupon the prints would be destroyed. He burned them in the grounds of Ealing Studios in front of the press and the film is regarded as lost. Perhaps a copy exists in a basement in Australia somewhere but it is unlikely. But then we might have said that about George Pearson’s film ‘Love, Life and Laughter’ were it not for the fact that it turned up about three weeks ago, having been found in a disused Dutch cinema in Gelderland. This was a real find, particularly as only one other complete film directed by Pearson, once one of Britain’s most esteemed directors, is known to survive. But if this is a real find, what is a fake find?

In 2012, the Papers of Abraham Lincoln Project announced that one of its researchers, Helena Papaioannou, had made an exciting discovery; a medical report by Charles Leale, the first doctor on the scene when Lincoln was shot, fatally as it turned out, at Ford’s Theatre in Washington.

But, writing in The Atlantic, Suzanne Fischer of the Henry Ford Museum disputed the find declaring that the document had not been discovered because it was ‘right where it was supposed to be’, namely in a file of Surgeon General’s correspondence at the National Archives in Washington. The comments on this article make interesting reading. One commenter compared discovering a document in an archive to ‘finding wood at Home Depot’, presumably because archives are where documents live and so finding them in their place is not a discovery.

To return to media examples, two episodes of the still mostly missing Doctor Who story The Daleks’ Masterplan were famously (if you like Doctor Who) found in the basement of a Mormon church in Clapham in 1983. Was this discovery different from the two Who stories tracked down by Philip Morris, the director of a TV company, in Nigeria last year, just because Morris found his tapes in storage at a TV station?

Or to put it another way, when archaeologists find things in the ground, do we decry them because the ground is a rather obvious (even prosaic) place to look for artifacts? Oh, you found Richard III under a carpark? How expected. It’s not like he was excavated on Saturn. Now that’s a discovery! So in principle it’s not clear that a document has to be found in an unlikely setting to be ‘discovered’.

Herself a trained archivist, Papaioannou argued the point in her own article insisting that the key issue was that ‘no one alive today knew that a copy of Leale’s report was in the records of the Surgeon General’. Fischer had already made the point that the documents were not catalogued to item level. They were probably in a box of correspondence with a catalogue description something like ‘In letters 1860-5, F-M’ which we can all agree is not as informative as perhaps it could be. But was Papaioannou right to imply that no one alive had seen the report? An archivist had perhaps seen it at some point. But, seemingly, they had not made a discovery. ‘I don’t discover my shoes each morning’, said a commenter, presumably implying that what we (as archivists) have placed we cannot ‘discover’. Does the archivist make the discovery? Are our cataloguers discovering? They might be. Many staff at The National Archives come across interesting and significant things. Sometimes they talk about them on this very blog. But what happens if they don’t?

In January of this year, the Guardian reported that a researcher had ‘chanced’ upon unpublished letters by Mary Shelley.  The researcher called it ‘a lucky find’ but their luck was a matter of preparation meeting opportunity: the letters were in Essex Record Office and had been spotted online (the Guardian called it ‘an unpromising website’ which is just mean). The implication was that this was discovery via Google. Again the comments were lively: ‘funny sort of ‘discovery’ when the letters were in a public record office, have been catalogued by an archivist, and put in an online search engine’, wrote Technopeasant. ‘This was catalogued and described and ready for the researcher without any particular effort. Any credit for ‘discovery’ goes to the archivist’, insisted Kate 2468.

But I don’t agree. What lost cities and found documents have in common is that someone other than their creators (or residents) comes to understand that they exist. Joshua Ranger has suggested a thing ‘cannot be lost if no one is missing it‘ and went as far as to argue that tales of ‘discovery’ harm the archival profession because they imply we’re not doing our jobs. This seems rather alarmist. Does interest and excitement cause harm?  The implication in his argument is that if archivists weren’t goofing off drinking tea and building state of the art digital preservation environments we’d see to it that everything could be found, is permanently available and then nothing would be discovered.

I have to say that this thought depresses me. The day all collections are completely digitised (to do this in Europe would cost billions so I’m not panicked) will be simultaneously cool and a bit dull. But it won’t stop discovery because discovery is an intellectual process. People will still find new knowledge in collections even if they aren’t physically discovering new documents. Because it isn’t objects, documents or films which change, it is our state of knowledge about them. This is true of a lot of discovery – gravity was working perfectly well before Isaac Newton noticed it.

Discovery is not about seeing something but about making a connection. Researchers look at documents every single day which might be thrilling if read by someone else but aren’t the thing they personally are looking for and so are passed over. The real myth about discovery in archives is not discovery itself – it happens! – but that the discoverer is solely responsible. But this myth is widely peddled all over the place. The myth of the lone scholar is as tired as that of the lone entrepreneur: research and innovation are collaborative. No one ever does it by themselves nor have they ever. In order to make your discovery you first read quite a lot of books by quite a lot of people, used catalogues and online systems they built, bounced ideas off your colleagues, partner, friends, pets and therapist.

In his 1925 book The Death of Christopher Marlowe, Leslie Hotson describes how he found the inquest record that significantly resolved the mystery of Marlowe’s death; he used ‘as a last resort…the modern manuscript calendar of the Miscellany of the Chancery’. He basically Googled it. And that means today you can make a discovery in your dressing gown – after all if Archimedes could have a eureka moment in the bath, why shouldn’t you? (Don’t drop your smartphone!) Good luck.