An international army of knitters

‘Our film aims to breathe life into the cold stillness of a war memorial. It is the story of one Lincolnshire family during World War One.’

Pauline Loven, on community film ‘Tell Them Of Us’

How did this all begin for the knitters? I was idly flicking through my Twitter feed one day in October 2014 and spotted the tweet which, as a keen knitter with an interest in the First World War, caught my attention immediately. The project was to involve a full year’s activity and was absorbing and rewarding. My task was to collect the information such as skill level and pattern preference for the willing army of knitters and crocheters, set up a database and try to match skills to a particular vintage pattern.

On the recommendation of one of our experts Annie Cholewa, I spent a fascinating day with Joyce Meader, a historical knitting expert who owns a very extensive collection of commercially printed knitting patterns. Her collection ranges from the 1800s to the present day. Joyce was very generous in sharing her patterns and in giving her time and expertise to the project.

Various yarns donated to the project

Our ‘Knitting for World War 1’ Facebook group blossomed and flourished from day one, with knitters submitting their projects and noting their progress. A more supportive online community would be hard to imagine. 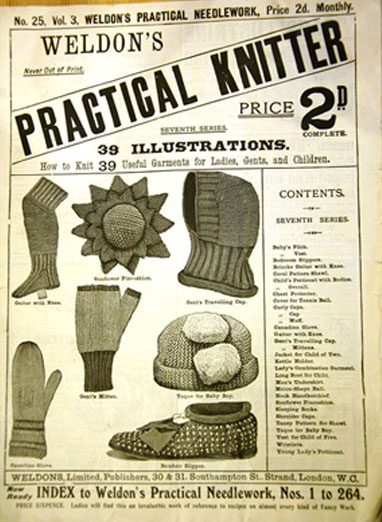 Between October 2013 and February 2014 a Kickstarter fund campaign was set up to cover expenses for postage and sundry items. Within a week or so, 46 backers had pledged nearly £3,000. Pauline listed her precise costuming needs, patterns were sourced, scanned and digitised, yarn began to come in from the generous companies who’d agreed to sponsor us. A few finished articles were received from knitters who’d gallantly set off on their own initiative and produced a range of items valued by those serving in the War such as gloves, mittens, scarves, and other small items which became known at the time as ‘comforts’. Further ideas grew; having an exhibition for all the knits, involving local schools in the project with a Remembrance weekend concert in Lincoln Cathedral where the children could sing those haunting wartime songs wear poppies on the various children’s jumpers (ganseys) that we’d knitted. Judith Brodniki played an invaluable role as a designer for all our printed material that helped further spread the word.

The film How to Help Tommy from the Imperial War Museum was particularly interesting, as it showed young children from London’s east end in a classroom busily knitting on four needles (no mean feat) and writing their message to put in the parcel for the soldier who would receive their socks. Home Front support for the war through knitting caught on at all levels of society. We discovered many interesting and informative articles about knitting in the war. It was even said that the Archbishop of Canterbury decreed that people were allowed to knit during the sermon during thewar years. We discovered how Lord Kitchener did not only famously tell the nation that ‘Your Country Needs You!’, but that he apparently developed a seamless finish for socks so that soldiers in the trenches who were already developing trench foot, did not have a seam rubbing against their toes. 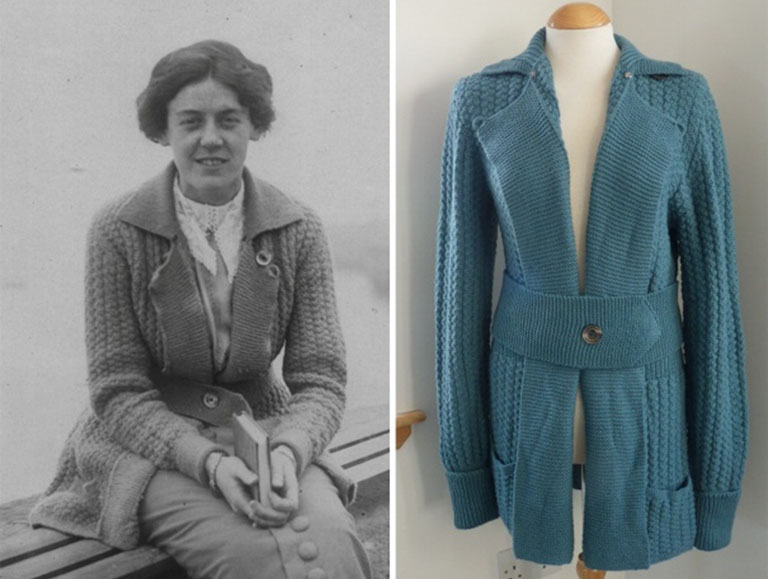 Left, original photograph of Grace Crowder and right, reproduction of her cardigan produced by Liz Lovick

We couldn’t find patterns for all the required knitwear. Pauline had a photograph of Grace Crowder, William’s sister, wearing a cardigan and Liz Lovick – our project’s chief knitter, troubleshooter and historian-in-residence – reverse engineered the cardigan by recreating the garment from the photograph.

Our international army of crafters was champing at the bit to start on their particular garment. In February 2014, I went to Lincoln to meet Pauline Loven, our producer extraordinaire and also Richard Speed, who with his wife Julie runs a knitting charity and whose connections in the knitting world are extensive. We began to match yarns to patterns and then allocate patterns to knitters. Not a simple task! The ply of yarns is described differently in vintage patterns. Our heads were spinning as we bundled yarn and patterns into posting bags. Knitting instructions from a century ago when knitting expertise was very advanced, were vague and general to our eyes. Liz Lovick set up a help page in our Ravelry group where our problems and puzzles could be tackled.Once the yarns were distributed, knitters posted their progress on our Facebook page which was rapidly becoming a showcase for the project. Our knitters and crocheters knitted on their commute, on a houseboat, on holiday, at every spare moment in the day. It was a truly thrilling moment when we saw photos of our finished garments on the actors. 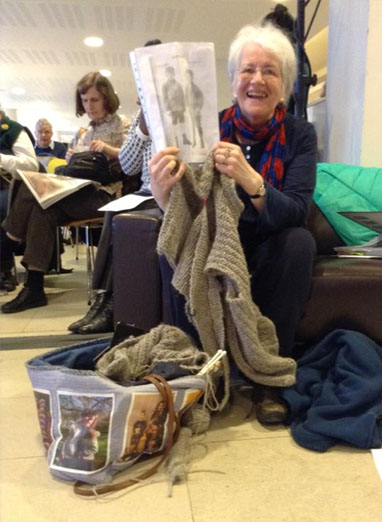 Further publicity came about in an unusual way. In February/March 2014, BBC Radio 3 held a residency at the Southbank and as a devoted listener, I went along with a big bag of knitting so I could listen and knit all day. Several people asked what I was knitting and on hearing of the project, they asked if they could join in too. One of the slightly anxious live performers likened us to Madame Defarge’s group from A Tale of Two Cities who would knit as the hapless victims were led to the scaffold. We formed quite a significant group in the listeners and Sean Rafferty, the presenter of In Tune, interviewed me on air to explain the purpose of the knitting. All this was good publicity for our venture and later we were to receive a further boost by being interviewed on Radio 3.

The project culminated in November 2014 with the concert in Lincoln Cathedral one Friday evening, the film premiere of Tell Them Of Us the following Saturday morning and the opening of the stunning exhibition  Centenary Stitches’ at The Collection in Lincoln. A group of the knitters attended and there was a roar of support when the 180+ names of contributors rolled past with the credits.

Centenary Stitches, an exhibition of the items produced during the project for community film Tell Them of Us is on display at Kew until 19 March. Hear Pauline Loven discuss the project here.

Centenary Stitches, first world war, tell them of us