On 16 July Adolf Hitler ordered preparations to be made for the invasion of Britain under the name Operation Sealion. He felt it would first be essential to weaken Britain’s air forces so they wouldn’t be able to oppose invading German troops. On 17 September 1940, plans to invade were postponed after Hitler concluded that Germany could not win the air dominance that it needed. Over the course of the Battle of Britain Germany’s Luftwaffe lost several hundred more planes than the Royal Air Force.

Our display of original artwork highlights two records from the INF 3 series, which includes 1861 pieces of propaganda art produced for the Ministry of Information during the Second World War. It comprises works by dozens of artists in a variety of media.

Jack Foreman Mantle was Acting Leading Seaman on board HMS Foylebank during the Second World War. This artist’s impression shows him operating his pom-pom gun. 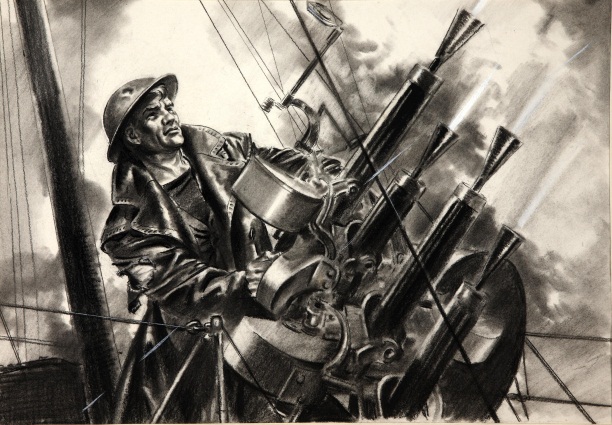 On 4 July 1940, just before the official start of the Battle of Britain, HMS Foylebank was attacked in Portland harbour by German dive bombers and incurred numerous hits. Mantle continued in action although mortally injured. He was posthumously awarded the Victoria Cross, Britain’s highest gallantry award. This original artwork was commissioned by the Ministry of Information for a pamphlet to illustrate the bravery of the British people in wartime. 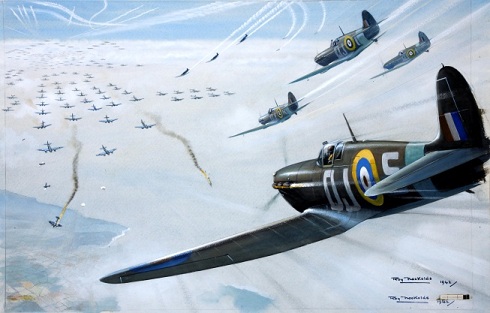 The second artwork shows a diving squadron of spitfires attacking a formation of German bombers. Although the piece has been dated 1942 by the artist this is almost certainly a depiction of the Battle of Britain.

This artwork is by London-born artist Roy Nockolds (1911-1979). Described as one of the pioneers of motoring art, Nockolds began sketching and drawing motoring subjects in the mid 1920s, contributing illustrations to Autocar, Motor, and Motor Sport magazines.

The Battle of Britain display is in the Keeper’s Gallery until February 2016.