The hippy shake … or just shaken up?

Regardless of whether we actually lived through them, or have only been able to experience them vicariously through the (often questionable) memories of our parents, the sixties was undoubtedly an interesting time to be alive. One of the most enduring images of the period is that of the long-haired and bearded ‘hippy’; dressed from top to toe in outlandish, multi-coloured garb.

Taking their cue from the beat generation – an anti-conformist youth movement which emerged in post-war New York – the counter-cultural antics of hippies in the US and beyond showed that challenging societal norms was not without personal risk. The popular image of the hippy is one of a happy-go-lucky, free-loving, commune dweller with an aversion to the hairdressers. However, the accompanying rejection of middle-class values, nuclear weapons and armed conflict more generally, quickly brought their activities to the attention of the authorities. And how did the establishment discern your hippy status? Well, according to this record, in Panama, the length of your hair could be the defining feature (FCO 47/326). 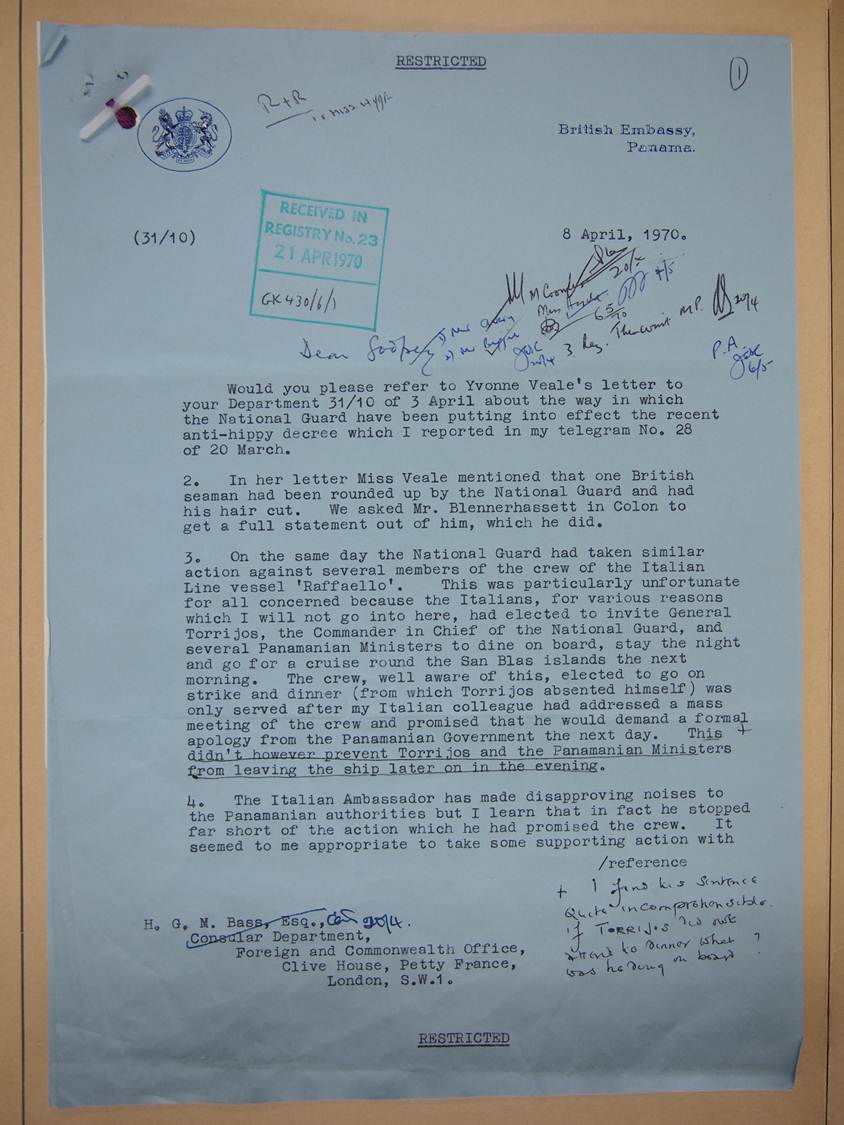 Panama: protest about haircut given by anti hippy-squad of Panama National Guard. FCO 47/326

Picture the scene – you are a long-haired seaman who has just docked your vessel in Colon, Panama, after a hard day’s sailing and are looking for somewhere to share a well-earned drink with your friends. You identify a suitable watering-hole, and approach the bar eagerly awaiting the tickle of that first drink on your arid taste buds. Before you have even begun to utter your first syllable to the expectant bar-person, you are forcibly escorted from the premises by the Guardia (Panamanian National Guard); your verbal protests earning you nothing but a place in a van populated with other long-haired captives on its way to the police station. Without explanation, you and the other captives are forced to sit down in a room at the station whilst two Guardia forcibly cut your hair with scissors before moving you on to a second room and shaving your hair clean off – you have just met the ‘anti-hippy squad’.

According to the document, this actually happened to a British engineer cadet working in Colon in 1970, although it is unclear whether he considered himself a ‘hippy’ or not. Either way, it raises some interesting questions about the power of hair and its perceived ability, in this case at least, to show anti-establishment sentiment. It seems that the Panamanian authorities were not the only ones of this mind – we also hold records relating to anti-hippy measures enforced in both London (MEPO 26/1) and Singapore (FCO 47/318).

It’s not all forced haircuts and revolt though. There is of course a lighter side to the hippy phenomenon, as this Pathe News clip demonstrates.

After his ordeal, the engineer cadet discussed in this post knew first hand the implications of a state haircut. He is not the only one. In the UK, and some of its former colonies and protectorates, thousands of people have shared this experience at the hands of Her Majesty’s Prison services. My next post will delve into the archives for a closer look at the implications of cutting the hair of those in custody.