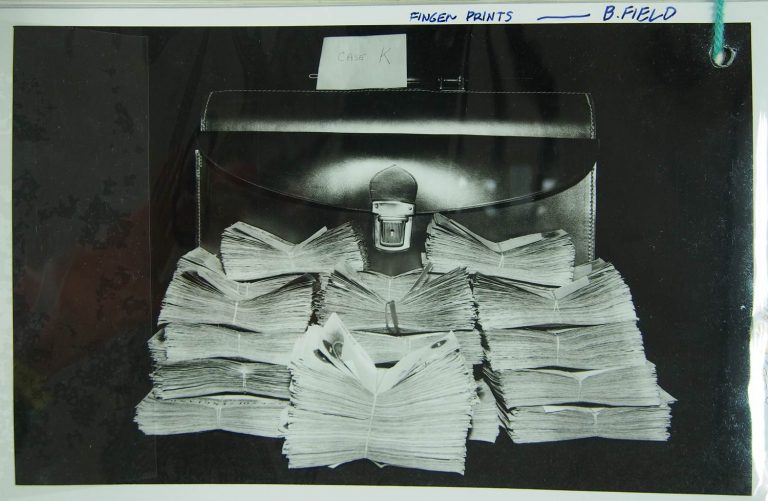 This post begins where my research for it ended: an image of a fraction of the £2.6 million pounds stolen from the Glasgow to London mail train on the 8th August 1963 (J 82/423 – Exhibit 11). Considering the subject of this series of blog posts is hair, I  have to admit the Great Train Robbery is something of a conceptual leap. Would you believe me if I told you my exploration started with a celebrity hairdresser?

Raymond Bessone aka ‘Mr Teasy-Weasy’, or ‘Teasie Weasie Raymond’ if you prefer, is widely regarded as Britain’s first celebrity hairdresser.  Replete, in his later years, with a faux French accent and a penchant for excess, he truly was quite a character. He even created, amongst a list of many, a hairstyle inspired by an alpine skiing accident.

Born Raimondo Pietro Carlo Bessone in Wardour Street Soho, 1911, ‘Teasie Weasie’s’ rise from false beard maker to celeb coiffure with salons in Mayfair, Knightsbridge and across the UK is one littered with interesting and unexpected cross-links. Let’s start with the hair.

Bessone’s first salon in Mayfair provided the training ground for one Vidal Sassoon, later to become a celebrity snipper and setter in his own right. Sassoon attributes his rise to fame to the lessons learned under Bessone’s tutelage and has a rather interesting history of his own. Were you aware that at the tender age of 17 the aspiring hairdresser was a young member of the anti-fascist ‘43 Group’; an organisation set up by ex-Merchant Seaman Morris Beckman (BT 395/1/5947) and others to counter, in most cases by physical force, fascist groups like Sir Oswald Mosley’s ‘Union Movement’ (HO 45/25401, MEPO 2/10648) set up in Britain after the Second World War? I wasn’t. Returning to hair and the characteristic excess of ‘Teasie Weasie’ , he made tabloid waves in 1956 when he was flown to the US to tend to actress Diana Dor’s barnet at a cost of £50,000 in today’s money! His labelling of his client, Duchess of Windsor’s hairstyle as ‘dogmatic’ also enjoyed plenty of red top coverage.

Fascists and flights but no mention yet of the Great Train Robbery. Tragically, in 1979 Bessone’s then 28 year old daughter was killed, along with her husband and two children, when their car crossed into lanes of oncoming traffic on the M4 and crashed head-on into a Porsche. The Porsche’s driver, who was also killed, was none other than Brian Carleton, formerly Brian Field, one of the organisers of the Great Train Robbery whose initial and former surname appears, as the keen eyed amongst you might have spotted, in the upper right hand corner of the image kicking off this post. It seems that police officers belonging to Buckinghamshire Constabulary found Field’s fingerprints on that particular case full of cash.

So there you have it. Next time you visit your local hair emporium, it might be worth stretching beyond the small talk to discover a little more about the person into whose hands you’re putting your new look – you never know where the conversation might lead.

‘Where next is this series leading us?’ I hear you cry. Coinciding with the latter portion of Teasie Weasie’s career, we head to Panama at the height of the ‘hippy’ movement and explore the potentially hairy consequences of being in the wrong place at the wrong time.