Set cookie preferences
Home > Blog > Is this the face of William Shakespeare?

Is this the face of William Shakespeare? 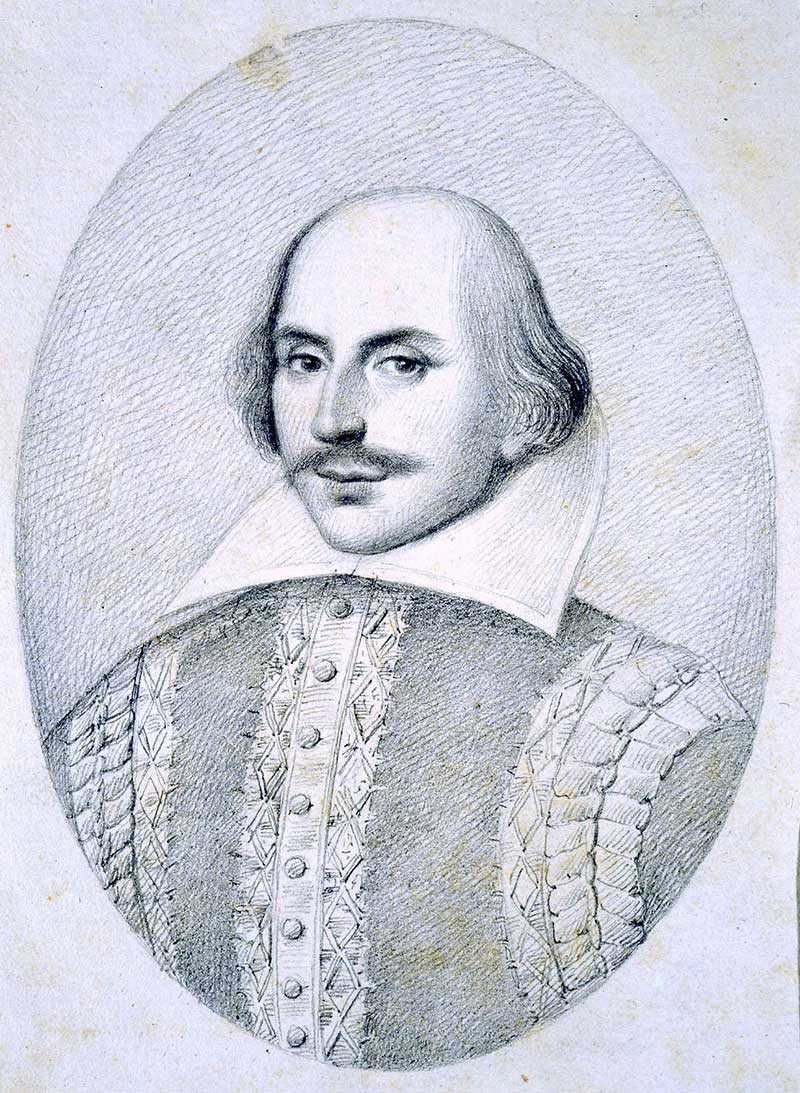 The portrait shows a balding man, dark haired, rather askew of eye, and wearing a white lace collar of a type familiar to anyone who has read anything about William Shakespeare.

The image itself is quite easily explained. It is a pencil copy, made in the 19th century by an antiquarian and archivist, of a 17th century portrait.

But is this an image of Shakespeare, and why is it in the collections of The National Archives at all?

Our portrait looks remarkably like the two known likenesses of Shakespeare: an engraving by Martin Droeshout for the First Folio and the bust effigy on Shakespeare’s tomb. Both are posthumous images, but both were commissioned by people who knew Shakespeare well. Since the two look reasonably similar to each other, they are likely as close as we can get to ‘knowing’ what Shakespeare looked like.

But wouldn’t it be fantastic to have a portrait from life? There is a long and disputatious history of other suggested portraits of Shakespeare. It’s obvious that many people, across many decades, have longed to get closer to the playwright in life.

The Wikipedia entry alone is lengthy. One of those listed is the original for the image we’re discussing today. Our sketch is a copy of an extant portrait, now owned by none other than the Royal Shakespeare Company. In the Wikipedia entry, you’ll find it called the ‘Venice’ portrait of Shakespeare.

But why is this image in our collection? The expert among whose papers it was found was Rawdon Lubbock Brown who, as you may have read in a blog earlier this year, was among the staff of the then-Public Record Office… but in Venice.

It is every antiquarian’s dream. To stumble across some neglected item in an Italian market stall that solves a puzzle, makes your name and fuels your literary imagination. Robert Browning did it in Florence with ‘The Ring and the Book’; Rawdon Lubbock Brown did it in Venice, with a long lost portrait of Shakespeare. Or did he?

The significance of the Venice portrait

What then can we say about his fine pencil drawing of the portrait Brown found and its extraordinary inscription, ‘Scoti Lanza (Shake Spear) English Playwright 21 July 1604’? On the face of it, it has everything. It identifies the familiar Stratford burgher as the playwright not just an actor, at a specific date when his powers were at their zenith, with a connection to the Venetian embassy in London, a known magnet for suspected Catholics like Shakespeare and Ben Jonson.

Brown approached the painting with a scholar’s careful attitude to weighing evidence. Any portrait of Shakespeare receives a huge amount of scrutiny. The Venice portrait is no exception. Rawdon Brown’s notes are sceptical, detailed, and aware. He no doubt suspected, naturally enough, that the hunger for images of Shakespeare – reawakened following David Garrick’s sustained rehabilitation of the playwright’s reputation in the late 18th century, and never satiated – had created a market in, at best, wishful thinking.

Shakespeare writes redolently of Venice, but there is not a jot of evidence he was ever there. Nor was there any particular reason for a portrait of him to be there 300 years after his death, labelled with a form of his name in Italian.

The portrait was not sold in Venice in Rawdon Brown’s time. Instead it was bought by Henry Graves in Paris, and bequeathed by him to the Royal Shakespeare Company. 1

As modern conservation and investigation techniques became more sophisticated, the Venice portrait had one last moment in the limelight. In 1969, it was one of a small number of paintings shown at a special exhibition by the Burlington Magazine and the art dealer Agnew’s, entitled ‘Art Detection, Painting and the X-ray’. X-ray and other photographic techniques have revolutionised art historical understanding in many ways. We are especially grateful to the Paul Mellon Centre for Studies in British Art which generously provided a copy of the exhibition catalogue. We have not been able to locate the original X-ray of the Venice portrait, despite the efforts of colleagues at the Courtauld Institute (which took the X-ray) and the National Gallery Research Centre (which holds the wonderful archive of Agnew’s).

The Visual Arts Data Service description says that the X-ray taken ‘shows that the head is painted on a separate section of canvas and superimposed on an already existing portrait, itself cut from a larger canvas’. Whatever the reason for this combination of canvases (and Rawdon Brown would not be the only person to be suspicious of the motive), it is highly unusual.

It seems unlikely that the composite image Rawdon Brown copied looked much like the originals from which it was created.

The sketch in PRO 30/25/205 is in one sense absolutely not the face of Shakespeare. It is a competent antiquarian 19th century sketch copy of a 17th or 18th century portrait – even, of two portraits spliced together, whether for reasons of aesthetics or marketing. The tantalising inscriptions ‘Scoti Lanza’ and the date in 1604 on the original seem at best hopeful additions.

On the other hand, when we see this image, what do we think? A lot of us recognise the man: we immediately understand that it’s William Shakespeare. The portrait testifies to the enduring interest, from 17th to 19th to the 21st centuries in re-encountering Shakespeare face to face.