Daybreak in Udi and the lost Oscar

Watching old films is always a bit of hunt for buried treasure, particularly if you stray away from a narrow list of classics. But few of these treasure hunts turn as literal as what happens if we investigate the 1949 documentary ‘Daybreak in Udi’, an Oscar winner you’ve probably never heard of. 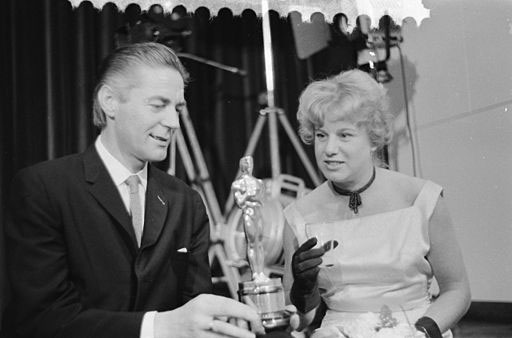 Shot in Nigeria by Britain’s Crown Film Unit, the film won the Best Documentary Oscar in 1950. This was the British Government’s fourth Oscar. During the Second World War, the Academy had saluted Roy Boulting, Harry Watt and Carol Reed’s work on Desert Victory, Target for Tonight and The True Glory (made with the US). These films were the award-winning tip of a wonderful iceberg: documentary films of extraordinary quality and significance, paid for by successive British taxpayers for the 20 years since the creation of the Empire Film Unit in 1929. There was nothing unusual about the international perception of Daybreak in Udi as an outstanding film. It was well understood that (whatever other mean stuff people might say about the British film industry) we knew how to make a documentary. In fact the only unique thing about Daybreak’s win was that it received an Oscar statuette, which had not happened during wartime.

Daybreak in Udi is a roughly 40 minute film about the building of a maternity hospital in the Udi district of southern Nigeria. It takes pains to show that ideas and energy come from local people not the British District Commissioner (E.R. Chadwick, playing himself) but nonetheless it’s clear his influence and investment is needed to bring the new building to fruition and to overcome the superstitious opposition of some in the village.

The film historian Femi Shaka has remarked on the realism of key scenes in Daybreak, for instance where the tribe debates whether to proceed with the hospital project. Shaka calls this ‘typical of how traditional African discourse is constructed’ and adds that the relationship between District Commissioner and villagers is ‘built on mutual trust and respect’. 1 Daybreak also features the first high five I’m aware of in a British film. (Shaka says this is a traditional Ibo greeting). Nevertheless the tone of the film at times makes for uncomfortable watching for a modern British audience. It is unquestionably extremely paternalistic and the BFI’s Patrick Russell has gone further and calls the film ‘deeply politically incorrect’.

But for this post, I don’t want to focus on the film itself. You can form your own opinions about it by watching it in full on the very fine Colonialfilm.org.uk. I want instead to talk about the film’s curious afterlife in records held at The National Archives (references INF 12/265 and INF 6/403).

In 1952, three years after the film’s release, two things connected with it happened. It was announced that the Crown Film Unit was to be closed. At roughly the same time the Foreign Office approached the Central Office of Information, Crown’s paymasters, asking to be allowed to borrow Daybreak’s Oscar for display at the headquarters of British Information Services in New York. BIS acted as Britain’s (good) press office in the United States. Its Director argued this would ‘earn more dollars’ and would also be ‘perpetuating the name of the Crown Film Unit’, since the Unit itself was shutting.

Crown’s few remaining staff rebelled. They kidnapped the Oscar and the film’s sound man, Ken Cameron, refused to return it ‘except to [BAFTA]’. ‘Doubtless my action will call for some repercussion’, he wrote to a flabbergasted COI, ‘but then, what can you do?…I have already had my letter of dismissal…you can prosecute me for larceny. But you would have a hard time convicting me for stealing something which is, by any ruling, as much mine as yours.’

To add injury to insult, sacked COI official Ralph Nunn May alleged that the inscription on the Oscar was ‘an obvious forgery’, faked either by the COI itself or perhaps by the Foreign Office, in the form of the acquisitive British Information Services. ‘The moral is, I suppose, that if you forge well and boldly enough you get away with it – which is a pretty dirty sort of moral for the Civil Service’, he wrote bitterly to his former colleagues. ‘I hope you’re proud of it.’

Nunn May’s unshakeable certainty that the Oscar’s base had been tampered stemmed mainly from the conviction that Oscars are awarded for artistic achievement and not to distributors or production houses. ‘The base’, he told the COI, ‘which is larger than the normal base and has evidently been added, is inscribed with the words “Presented to the British Information Services”. Now no Oscar was, or ever will be presented to any such body…To be blunt, the inscription is a forgery.’

The file includes further interested correspondence from Daybreak’s director Terry Bishop. Bishop asserted that the Oscar firmly belonged to the Crown Film Unit ‘collectively’ but went on to express some concern that with the unit’s dissolution the statue ‘might find itself condemned to collecting dust in a strange home.’ Happily, he offered a solution, telling the COI, ‘I am sure you will not mind my venturing to assure you that there is always a warm welcome awaiting it in the home of your obedient servant, Terry Bishop!’

There is no evidence that Bishop got his wish. Instead, the COI got a ruling on who owned the Oscar from Margaret Herrick, Executive Director of AMPAS (The Academy of Motion Picture Arts and Sciences), who had awarded it. Her records conclusively demonstrated that Nunn May’s charges of forgery were unjustified. The Oscar’s inscription had always named both British Information Services and Crown and she went on ‘it would seem to me that since the Crown Film Unit was part of the British Government, the statuette is government property’.

A conciliatory meeting seems to have been held with Ken Cameron to get him to ‘understand the pains we have taken to establish the facts in this case’. Confronted with irrefutable evidence from the Academy that the Oscar did not belong exclusively to the production team, Cameron handed it over on 8 July 1952.

It had always been the intention that the New York loan would be ‘indefinite’ and in an earlier memo one COI staffer suggested ‘one might assume that an extended loan would in fact mean permanent transfer’. ‘As it has already spent some time in the New York office it will hardly be going back to a strange home and it will, I am sure, not collect dust there’, Terry Bishop was told. This may or may not have been true.

The Oscar appears to have reached New York in early September 1952 at which point the file ends. There is no evidence it was ever returned to the UK and, 60 years on, the whereabouts of the British government’s only actual Oscar is a mystery. The National Archives holds many weird and wonderful objects chronicling the history of government, from William Gladstone’s budget box to a mummified rat. But while it contains the files that allowed me to tell this story, it does not hold the statuette.

Even after all the years elapsed since the ‘gilded gentleman’ was flown to the United States, I thought it just possible that the statuette might still be on display at the British Consulate in New York. This has moved since the 1950s from a previous home at Rockefeller Plaza and is now on Third Avenue. But today its staff, despite very kindly undertaking some enquiries (and I believe a little rooting around in the Consulate’s basement) have no idea of the location of Daybreak’s Oscar.

Under agreements signed by all winners from 1950 onwards it is not legal to sell an Oscar without first offering it back to the Academy for a token sum. But the Oscar has not been returned to the Treasury of the Academy of Motion Pictures, Arts and Sciences. Ken Cameron’s unsolicited offer to Thorold Dickinson at BAFTA also did not bear fruit: the Oscar does not today hold pride of place at 195 Piccadilly in London. Finally, The British Film Institute’s Special Collections include a number of Oscars (including Jack Cardiff’s for Black Narcissus) but Daybreak’s is not amongst them.

I don’t know where it is. Oscar has left the building.

And perhaps it doesn’t matter. ‘Seldom has so much heat been generated about so little’, scribbled a frustrated civil servant on top of one of the many memos deciding the statue’s fate, and perhaps he was right. It’s just a piece of bling after all. But I’m not so sure. Of all Britain’s Oscars over the years, from the early successes of Frank Lloyd and Charles Laughton to Tom Hooper, Colin Firth and The King’s Speech, this is the only one that the Academy decided belongs to us. To all of us. Today, Daybreak in Udi might seem a mildly unpleasant imperialist relic and its shiny award doubly misplaced and not the best epitaph to the Crown Film Unit’s work of showing us ourselves, at home and abroad. But I would use the same words the Daily Telegraph came out with when the Unit’s closure was announced back in 1952: ‘films like these, by reminding us of things it is pleasanter to forget, make for a better world’.

I’d like to thank the Academy. And I’d like to ask all of you, has anyone seen our Oscar?