Cuts and custody: belief and punishment

Cutting the hair of those in prison custody is an act which was long justified by its hygienic benefits 1 There are of course other psychological and sociological impacts of such practices. This letter sent from the Governor of Glendairy Prison, Barbados, to John Wodehouse, the 1st Earl of Kimberley and Colonial Secretary in 1872, is a case in point. 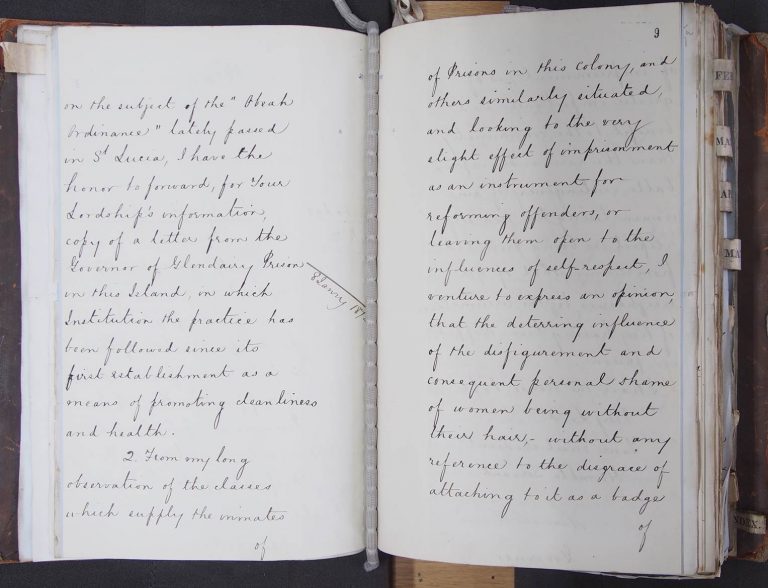 ‘From my long observation of the classes which supply the inmates of prisons in this colony and others similarly situated, and looking to the very slight effect of imprisonment as an instrument for reforming offenders, or leaving them open to the influences of self-respect, I venture to express an opinion that the deterring influence of the disfigurement and consequent personal shame of women being without their hair, without any reference to the disgrace of attaching to it as a badge of imprisonment, is of greater importance and benefit to the community than the rare and improbable contingency of any woman losing her own self respect, or being prevented from recovering that of her neighbours, by the circumstance of her having being cropped in prison.’

This rationale, using hair as means of inducing shame, was employed to powerful effect towards the end of the Second World War, where female collaborators were publicly shorn.

Returning to Glendairy Prison, the letter also links the practice of hair cutting to the crime of ‘Obeah’. In today’s terms, Obeah can be thought of as both a religious and holistic healing practice.  However, it should be noted that it has also been invoked for potential negative effect. The first time it was officially considered a crime was in 1760 in Jamaica where it was implicated in the most significant slave rebellion of that century. As a result, its practice was outlawed in the ‘Act to Remedy the Evils arising from Irregular Assemblies of Slaves’ (CO 139/21) – an act which placed robust controls on the freedoms of enslaved peoples. Several other pieces of Obeah-related legislation followed this act over the course of the ensuing two centuries across the Anglophone Caribbean (CO 103/12, CO 139/108, CO 154/12, CO 139/110). As this image shows, practitioners did fall foul of these new laws (CO 152/287).

The unfortunate people convicted under the various Obeah laws were not the last to experience victimisation on the grounds of their beliefs. Almost 150 years after abolition, black British subjects were still losing hair in connection with their beliefs.

The Rastafarian religion originated in twentieth century Jamaica and has long been associated with peaceful, anti-establishmentarian sentiments. The enquiry conducted by Lord Scarman in the wake of the 1981 Brixton riots included consultations with Rastafarian groups in an effort to understand their perspective on the situation. 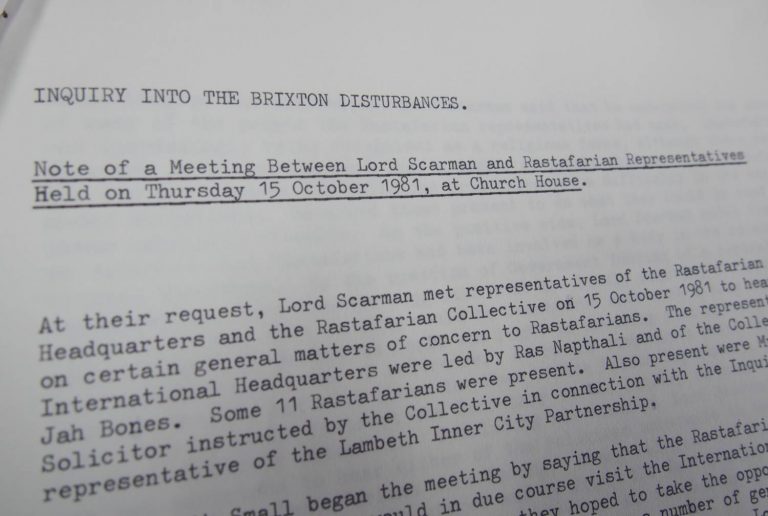 During the consultation, representatives expressed discontent at the fact that Rastafarianism was (at the time) not viewed as a religion by the state, and as such Rastafarians’ dreadlocks could be lawfully cut off in prison.

The document also goes on to make the claim that Rastafarians were both victimized and physically abused by police, partly as a result of their unusual hair style.

The transatlantic slave trade connected Africa, Britain and the Americas in myriad ways. Anthropologically, it is difficult to discuss Caribbean people, Obeah or Rastafarianism without mention of Africa. With this in mind, my next post is dedicated to some of the African hair styles evidenced in our collections.