The Christmas truce of 1914 will generally conjure up images of opposing British and German soldiers walking calmly across No Man’s Land, exchanging gifts and playing football. These images have become reinforced via personal memoirs, dramatisations and films. This blog post in memory of the unofficial ceasefires which occurred during the Christmas period of December 1914 will use unit war diaries, from WO 95, to reflect upon the events that occurred on Christmas Day 1914, some of which were very contrasting.

One of the quickest ways to check if a battalion that you are interested in was involved in a truce would be to consult their unit war diary. Arranged into monthly folders, these diaries record the day-to-day activities and experiences of each unit of the British Army, where they survive. Researchers should beware, however that the level of detail recorded in a war diary can vary, and in some cases may suggest that little was happening. This is the case for the 1 Battalion, Norfolk Regiment, with their diary entry for Christmas Day being left entirely blank. With the entries previous to and after that date being recorded in only very basic detail, the first impressions therefore are that this battalion was not involved in any ceasefire activities. 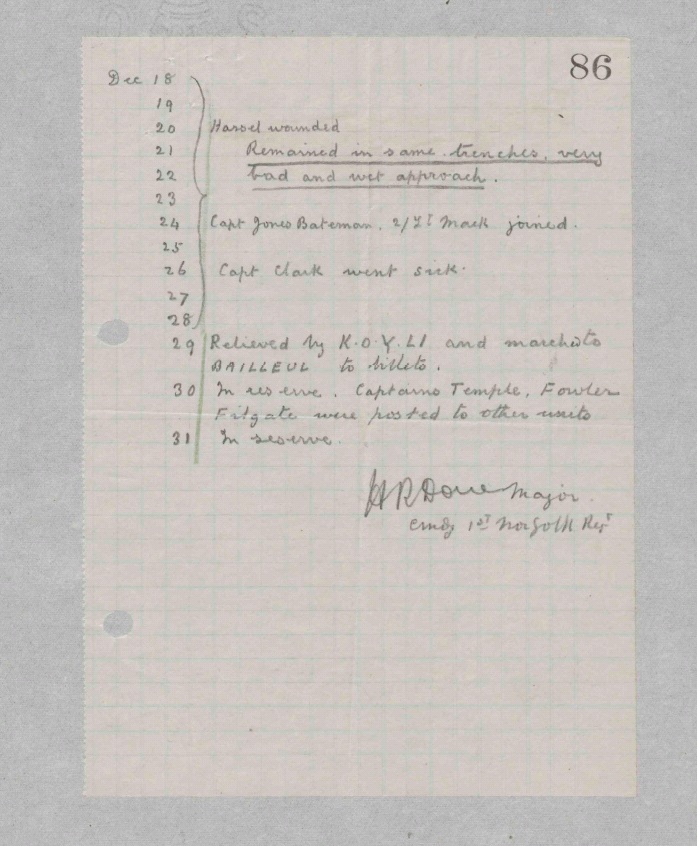 Moving up to Brigade level, however, reveals a far different impression of what happened to the 1 Norfolk battalion on this day. Each battalion would belong to and report to a Brigade. The Brigade would have a Headquarters, who would also keep a war diary. Likewise, researchers can carry on moving through the level of command, moving from Brigade to Divisional level and so forth, all in the hope of gaining more information on your unit of interest, as well as gaining a greater perspective on the activities and events going on around them.

So, the diary entry for the 15 Infantry Brigade Headquarters on Christmas Day, 1914 reveals that at about ‘2 p.m. a German officer unarmed walked towards the Norfolk trenches’ (WO 95/1566/1). So straight away, we have discovered more information about the experiences of the 1 Norfolk battalion by moving up to the Brigade level diary. The entry confirms that between ‘200 and 400 British and German troops, including officers conversed and sung hymns together’, which lasted for an hour and a half.

15 Infantry Brigade Headquarters diary. Entry confirms that a ceasefire developed in front of the 1 battalion, Norfolk Regiment (catalogue reference: WO 95/1566/1)

When moving further up the chain of command to check the 5 Division Headquarters General Staff diary, we find further insights into the truce involving the Norfolk battalion. Brigadier General Gleichen, commanding 15 Infantry Brigade, reported to 5 Division that the first attempts to enter into an unofficial truce began during Christmas Eve, with ‘a good deal of shouting and chaff between our right trenches (Norfolks) and the Germans about La Petite Douve Farm, each inviting the other to come over’ (WO 95/1510/4). Again, therefore we discover more information about the 1 Norfolk battalion by moving up to the Divisional level diary.

During Christmas Day itself, a truce developed which included ‘talking and fraternizing and accepting each others’ cigars and cigarettes’. Brigadier General Gleichan described the German forces as being ‘very friendly and appeared to have no evil intention of any sort’. Captain J Bagwell, commanding A Company of the Norfolk battalion, reported that he and Captain Longfield witnessed men from both sides who ‘were singing together’. Captain M F Clarke of the 6 battalion, Cheshire Regiment, also of the 15 Infantry Brigade, stated that the ‘Germans said they wished the War was over and that there was a peace conference taking place in Berlin’ (WO 95/1510/4).

Many recent events have drawn attention to the games of football which broke out among troops in No Man’s Land. While the unit war diaries do not record such matches as having taken place, they do record another significant act of compassion between the opposing forces. The 10, 11 and 12 Infantry Brigade Headquarters diaries all note the efforts of men to collect the fallen from No Man’s Land and provide them with a dignified burial. For the 10 Infantry Brigade, this specifically involved men from both the 1 Royal Warwickshire battalion and opposing German units working together to bury 15 British and German soldiers (WO 95/1477/5).

10 Infantry Brigade Headquarters diary. Entry confirming efforts of British and German troops working together to bury the fallen trapped in No Man’s Land (catalogue reference: WO 95/1477/5)

The compassion shown by the opposing forces in some areas was not shared by all of the troops across the Western Front, however. The diary of the 2 Grenadier Guards reveals a far more miserable and deadly experience, with the battalion manning trenches ‘waist deep in water’ and targeted by the ‘considerable’ activities of enemy snipers and trench mortars throughout Christmas Eve. The German forces then attacked the Grenadiers’ positions, forcing them to retire to a secondary trench line, where they fought off a further German attack. Four officers and 53 non commissioned officers and men became casualties on Christmas Eve, with 17 killed and six wounded and missing (WO 95/1342/1). 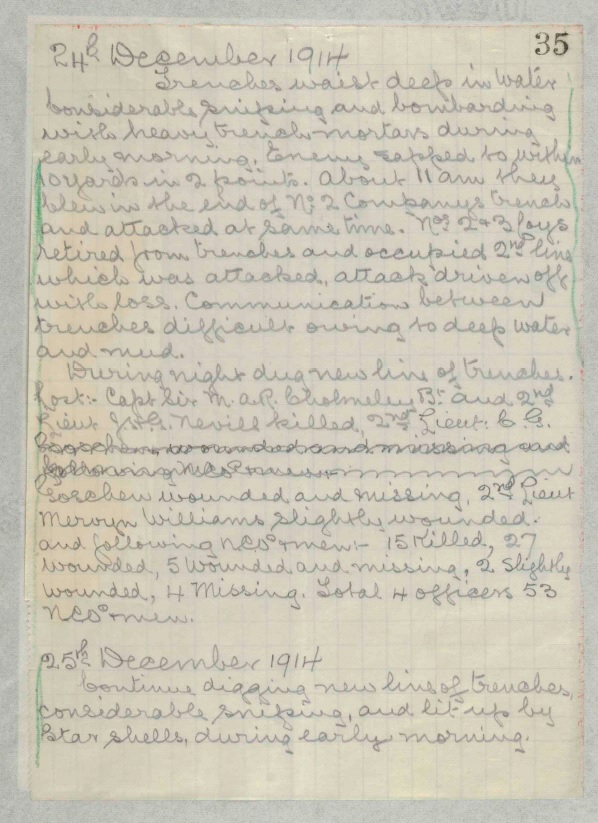 2 Grenadier Guards diary. Entry for 24 and beginning of 25 December 1914 detailing the difficult conditions in their trenches, the losses caused by German attacks, and the need to dig new trench positions (catalogue reference: WO 95/1342/1)

During Christmas Day itself, the Grenadier Guards were busy digging and consolidating their new trenches from the previous day, and were still being troubled by snipers. Three more Grenadiers were killed, with 19 wounded and two reported missing. Despite a subsequent period out of the trenches from 19:00 on Christmas Day until 19:00 on 27 December, a further 47 men were hospitalised with frost-bite during this time. On their return, the trenches were still ‘very deep in water and mud’, not helped by ‘thunder, hail and rain’ which soon fell upon the battalion (WO 95/1342/1).

To compound the rather fraught events over Christmas, the diary of the 4th Guards Brigade reveal that the 2 Grenadier Guards, along with the other units of that Brigade, were also short of their full fresh meat ration as a result of ‘sundry mishaps in the supply from home’ (WO 95/1341/1).

Christmas 1914 therefore brought very contrasting events across the Western Front. Some soldiers were able to stop and meet complete strangers from opposing trenches. Others collected and buried the fallen. Some continued to experience the dangers of a deadly and bloody conflict.