The atomic bombing of Hiroshima

On the morning of Monday 6 August 1945 – 70 years ago today – the residents of the Japanese city of Hiroshima awoke to a bright and warm summer’s day. An air raid warning sounded at around 07:00, but no bombs fell and the all-clear was given an hour later. Father John John A Siemes, a philosophy professor, was sitting in his room 2 km away from the city: ‘Suddenly – the time is approximately 8:14 – the whole valley is filled by a garish light which resembles the magnesium light used in photography, and I am conscious of a wave of heat’ (CAB 126/252). Other eye-witnesses ‘saw a blinding white flash in the sky, felt a rush of air and heard a loud rumble of noise, followed by the sound of rending and falling buildings. All also spoke of the settling darkness as they found themselves enveloped by a universal cloud of dust’ (PREM 8/194). An atomic bomb had exploded above their city.

The first wartime use of a nuclear weapon represented the culmination of the Manhattan Project. Emerging from humble beginnings, the project eventually grew to employ 130,000 workers and consume over $2 billion (approximately equivalent to $26.5 billion in 2015). Despite its size, the project remained so secret that even Vice President Harry S Truman was unaware of its existence until he succeeded Franklin D Roosevelt as President in April 1945. Co-operation with Britain’s nuclear weapons development programme, codenamed Tube Alloys, was formalised in the 1943 Quebec Agreement. An arrangement to continue collaberation after the end of the war was made at a meeting between Prime Minister Winston Churchill and President Roosevelt in Hyde Park in September 1944 (PREM 3/139/10).

A map of Hiroshima showing the effects of the bomb. The red hatched areas represent fire damage (catalogue reference: PREM 8/194)

Work on selecting targets for the atomic bomb began in spring 1945. Major General Leslie R Groves had been responsible for the overall direction of the Manhattan Project since September 1942. He emphasised that these targets should be chosen so as to adversely affect Japan’s morale and ability to continue the war. As the bomb was expected to do its damage through the initial blast, followed by subsequent fires, target cities needed to contain a large proportion of closely-built frame buildings. They should also have suffered no prior bombing, so that the full impact of the bomb could be demonstrated. Hiroshima was identified as one such target. Its strategic significance came from being home to the headquarters of the Japanese 2nd Army, which commanded the defence of southern Japan. It also acted as a communications centre, a storage point, and an assembly area for troops.

The dawn of the atomic age came on 16 July 1945. An implosion-design plutonium bomb nicknamed ‘The Gadget’ was successfully tested in the New Mexico desert under the operational codename of Trinity. The Hiroshima weapon was available from 31 July. Nicknamed ‘Little Boy’, this bomb was a uranium gun-type device weighing 9,700 lbs. It was dropped from a Boeing B-29 Superfortress bomber – named Enola Gay after pilot Colonel Paul W Tibbets’s mother – and detonated at around 2,000 ft. above ground level. By air bursting the weapon at this height, American planners hoped to maximise the effect of the blast while minimising radioactive fall-out.

J Robert Oppenheimer, the physicist who oversaw the design the bomb at the Los Alamos development facility, estimated that 20,000 people would die in the attack. The report of the British Mission to Japan, ‘The Effects of the Atomic Bomb at Hiroshima and Nagasaki’, put the actual figure at four times that number. In addition, powerful gamma rays proved deadly to nearly everyone exposed to them up to half-a-mile from ground-zero. Out of 23 people that survived the initial blast in one concrete building, only two lived beyond 17 days. These survivors were on the ground level, shielded by the upper floors and by adjacent buildings (PREM 8/194). 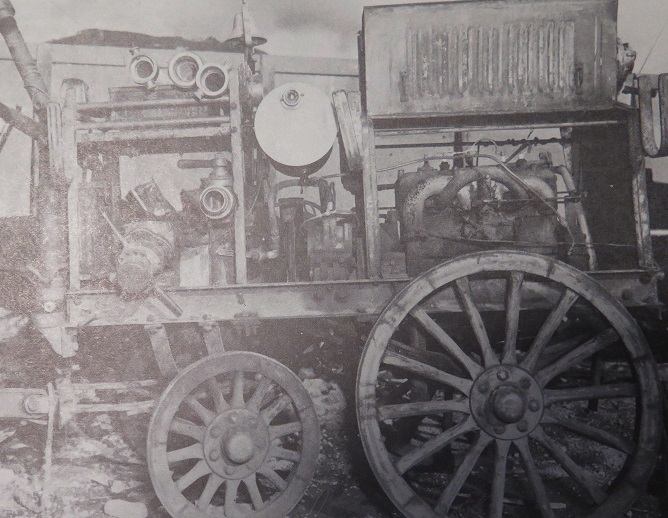 A typical Japanese fire engine in 1945. The country had only a limited amount of more modern equipment (catalogue reference: FO 371/59640)

The bomb destroyed over four square miles of the city. In the city centre, ‘everything but the reinforced concrete buildings had virtually disappeared’ (PREM 8/194); ‘a desert of clear-swept, charred remains, with only a few strong building frames left standing was a terrifying sight’ (CAB 126/252). Later estimates put the yield of the explosion as high as 15 kilotons (the equivalent of 15,000 tons of TNT). It took a month for debris clearance and cremation of the dead to begin, and ‘members of the Mission still stumbled upon undiscovered skeletons’. In view of the extent of the destruction, the Mission concluded that ‘no civilian defence services in the world could have met a disaster on this scale’ (PREM 8/194).

A second bomb was used against the city of Nagasaki on 9 August. Kokura – the backup target for the first attack – had been the primary target that day, but weather conditions and lingering smoke from the firebombing of nearby Yahata forced a change of plan. This bomb, ‘Fat Man’, was of the same type as the one tested in New Mexico. It proved even more effective than ‘Little Boy’. On the same day, the Soviet Union entered the conflict on the side of allies. The war finally came to an end the following week. After Cabinet deliberations – and an attempted coup by a faction of the Army that wanted to continue fighting – Emperor Hirohito announced Japan’s surrender on 15 August.

The decision to drop the bomb has provoked much debate. In 1947, Henry L Stimson, US Secretary of War from 1940 to 1945, wrote an article for Harper’s magazine defending the use of the weapon. The American operation to take the small, sparsely populated islands of Okinawa resulted in large-scale loss of life, and plans for Operation Downfall, the invasion of mainland Japan, envisaged a particularly high death toll. Stimson therefore argued that the bomb was necessary in order to shorten the war and save lives. This view was challenged by Gar Alperovitz’s Atomic Diplomacy: Hiroshima and Potsdam (1965), which made the case that the use of atomic weapons was not needed to end the conflict. As The National Archives’ @ukwarcabinet Twitter feed shows, operations against Japan continued apace throughout July. By August, the firebombing and blockade had left Japan on the brink of surrender. For Alperovitz, American policy-makers’ main motivation for using the bomb was a desire to intimidate the Soviet Union as they looked towards the post-war international order. Whatever the rationale behind its use, however, the deployment of a nuclear weapon at Hiroshima continues to cast a long shadow over the world.