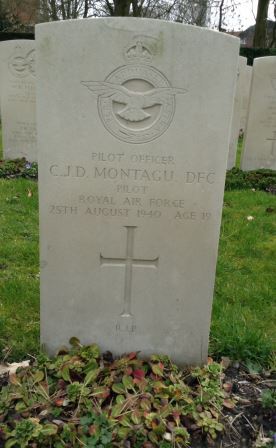 We often get readers coming into The National Archives wanting to find information about their ancestors in the RAF, yet they come with only their name.  With service records from 1920 onwards still held at the Ministry of Defence, how much is it possible to find out and how easy is it to do with just a name? Are we limited to learning about only a small part of their life or can we get a bigger, broader picture?  Being relatively new to The National Archives and wanting to develop our records knowledge  in order to best advise readers with their enquiries, these were questions we were keen to find the answers to.  So armed with the name, Charles James Drogo Montagu, chosen from a recent visit to the Amsterdam New Eastern Cemetery in the Netherlands, we began our journey.

Our first point of call, as with many servicemen, who fought and died in combat during the world wars, was the Commonwealth War Graves Commission (CWGC) website. Helped by the fact that our man had an unusual name, we quickly discovered he was a Pilot Officer in the 77 Squadron (had our man had a more common name the process of identifying the correct individual could have made research somewhat more difficult).  He died on 25th August 1940, aged 19, and was awarded the Distinguished Flying Cross (DFC).  The CWGC also gave us his parents’ names: George E.S and Doris Montagu of Wiltshire. Brilliant, we thought. So, where do we go next?

The easiest thing was to work backwards. So, we began by looking at the Squadron Operational Records in AIR 27, by searching for the 77 squadron and looking for the reports of August, the month of his death. It told us little about the specifics of his death, other than he (and his crew) ‘failed to return and were posted missing’. However, it did tell us that Augsburg Airframe Factory was the primary target and that Montagu and crew (whose names we now knew) set off at 20:00. It also gave us a further hint of where to look, making reference to C55 of the appendices, also in AIR 27. So, in our quest to find out more about the fateful evening in August, this is where we turned to next, easily searchable in Discovery by searching ’77 squadron AND appendices’. This told us that, whilst Augsburg was the primary target, it was actually Ludwigshafen Nitrogen Plant that was the target for the 77 squadron. It confirmed that the Whitley Vs took off from 20:00 and were to leave the target by 00:30. Supplemented by information collected from Bomber Command Losses (an excellent book detailing information on all of those lost in bomber command squadrons) and weather reports in AIR 22  we found out that he took off under cloudy, drizzly weather condition and that they crashed at approximately 03:00 near Amsterdam. So, using a combination of primary and secondary literature, we drew a more comprehensive picture of his last few hours.

Next, we wanted to investigate why Montagu was awarded the DFC. To do this, we returned to the squadron records in AIR 27. Continuing to work backwards, we looked at the report from July 1940 and found an entry reasonably quickly on 12th July. This then allowed us to search for the entry in the London Gazette for this date. We were lucky in that his citation was rather more substantial than many others, giving a brilliant blow-by-blow account of what they endured: ‘for three and a half hours…on one engine [that] steadily lost height’ Montagu showed ‘coolness and efficiency’ throughout. On another occasion, earlier in June, he was forced to abandon his aircraft after it set alight, despite his efforts to extinguish the fire. Our man, it seems, had a calm exterior in such situations; how he really felt in such moments, we will of course never know. 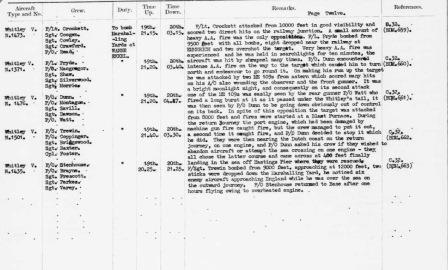 We continued to work backwards, looking at earlier squadron reports, which gave the first mention of Montagu participating in an operation in May, whilst the Daily Routine Orders in base records for 1940 show that he was Orderly Officer from 18th May 1940. The Daily Routine records, whilst not giving detailed information about a specific individual, were an interesting read, detailing life within the base from orchestra practise to football matches. What they told us about Montagu, however, was that he most likely joined the 77 squadron in May 1940, meaning he saw only three months of combat– unfortunately not uncommon for men within the RAF and hitting home the magnitude of the sacrifices that these men made for their country. We were now keen to find out if we could find out more beyond his life in the RAF. We began with the basics: when was he born, was he married, where did he live? Using a combination of Ancestry and FindMyPast, we determined that he was born in the spring of 1920 in Pewsey, Wiltshire and he wasn’t married. With no census records available after 1911, but the names of his parents and that he lived in Wiltshire, we decided to start with this. We found a definitive result from the 1911 census which told us that he came from a wealthy family, his parents living on ‘Private Means’ in a seven roomed house complete with a servant in Wilcot. Through further digging we found his father’s Medal Index Card from the First World War. Seemingly Charles had followed in the footsteps of his father in serving his country; unlike his father’s war service, however, Charles did not return to a hero’s welcome.

So, what had we learned? Let’s refer back to the main question posed at the beginning: is a name enough? In this case at least, we found a great deal of information with just a name, not only from  his time in the RAF, but we had  been able to delve deeper into the life of this young pilot – both during, and prior to, the Second World War.

The main things we learned were:

Carter, C & N. Carter, The Distinguished Flying Cross and how it was won (London, 1998)