A physical and moral defence

Every so often, when I meet someone new at a social gathering, 1 I have a conversation that runs something like this: 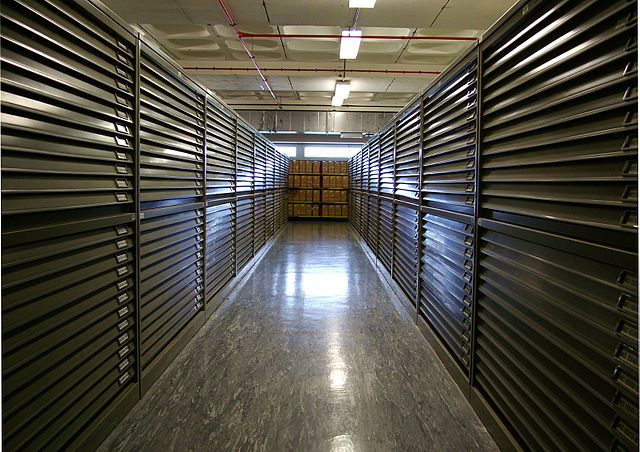 Appropriate storage, such as these map chests, is part of our physical defence of the records

New acquaintance: So, what do you do for a living?
Andrew: I’m an archivist.
Acquaintance: Archivist? What does that mean?
Andrew: It means that I look after historical records.
Acquaintance: Oh. What sort of records do you have, then?
Andrew (proudly): I work at The National Archives. We have government records, millions of them. 2
Acquaintance (unconvincingly): How, erm, interesting. 3
Andrew (hastily): I specialise in maps and plans and things like that.
Acquaintance (brightening up considerably): Oh, I love maps.

In one way, it isn’t surprising that most people don’t know very much about what archivists do because the scope and responsibilities of the job vary quite a lot between different archives and between different roles within the same organisation. Some archivists work mostly with records made of paper and other ‘traditional’ materials but others work mainly or entirely with digital records. Some archivists, like me, spend a lot of time answering enquiries and talking to researchers, but others spend much less time doing that. 4 What we all have in common is our commitment to the records.

Sir Hilary Jenkinson, who was one of the most important British writers about archival theory and practice during the 20th century, 5 had much to say to about the role of archivists. According to Jenkinson, an archivist’s primary duty is the physical and moral defence of the records in his or her care. 6 Why is this defence ‘moral’ as well as physical? Archivists believe that preserving the intellectual properties of records and their relationships with one another 7 – which Jenkinson rather grandly terms a moral defence – is just as important as looking after the records physically.

Staff here at The National Archives – and people working in archives all over the world – do many things in defence of the records in their care.

Our rules for people doing research in our reading rooms provide one example. Some of the things that we ask researchers to do are designed to help us ensure the wellbeing of the records. For instance, using foam wedges to support an old volume whilst reading it contributes to the physical defence of that record. Keeping the pages forming a bundle of loose papers in the same order that you found them – and being careful not to muddle them up with papers from another bundle – helps our moral defence of those records. 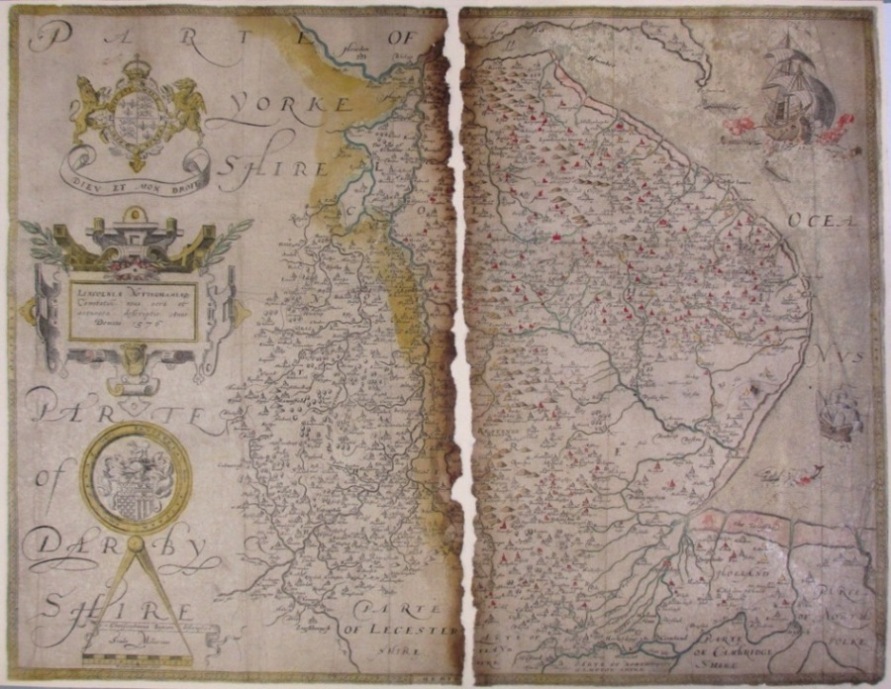 This map of Lincolnshire and Nottinghamshire dates from 1576. Reference: MPC 1/212

Another example is cases when part of a record has been extracted from the remainder because it is more appropriate to store it in a different format. 8 For instance, some files, volumes or rolls that contained maps have had the maps taken out for treatment by a conservator. 9 The repaired maps have then been kept separately instead of being put back in their original places. 10

For instance, the map shown above 11 had been folded in half to fit inside a volume 12 and had perished along the fold line, leaving it in two pieces. In 1952, it was taken out of the volume, conserved and placed in a portfolio. Being stored flat is much more appropriate for a map of this size: it makes it much more readily usable and ensures the physical defence of the record.

But what about the moral defence? The process of extraction has secured the physical wellbeing of the map but at the cost of separating it from its proper intellectual context. To preserve the original structure of the record (of which the map is just a small part) a ‘dummy’ sheet has been put into the volume in its place. The dummy briefly notes what has been extracted, when the extraction was made, and where the extracted map can be found. 13 Similarly, a label inside the portfolio containing the extracted map notes when it was conserved and which record it was extracted from.

Left: The dummy sheet records where the map used to be stored inside the volume. Reference: DL 42/119 folio 378. Right: This label notes which record the map came from

This system of preserving both the physical and the ‘moral’ wellbeing of records undergoing partial conservation treatment was first used in about 1926. We believe that Jenkinson himself (who was then a senior archivist at the Public Record Office) was probably responsible for devising this system. 14

Nowadays, the intellectual relationship – and hence the moral defence of the records – is also preserved though our online catalogue entries. The extracted map has a separate catalogue entry from the entry for the volume that it came from. The two entries are cross-referenced to one another, so that users of the catalogue can understand the relationship between the map and the volume before looking at the records themselves.

The next time someone asks me what I do for a living, I might just say: ‘I’m a physical and moral defender of your heritage’. I wonder what kind of reaction that will provoke?